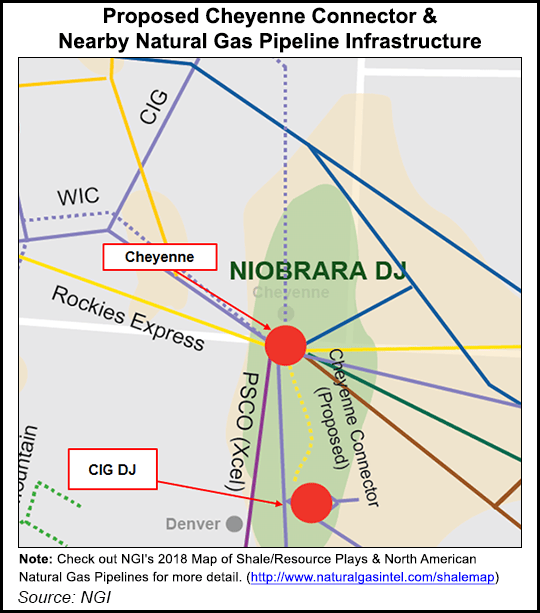 The estimated $213 million Cheyenne Connector proposes building a 70-mile, 36 inch-diameter pipeline that would deliver gas into REX’s Cheyenne Hub, allowing access to markets in the Midwest, Midcontinent and Gulf Coast. The Cheyenne Hub Enhancement — expected to cost around $133 million — would increase capacity at REX’s existing facility by around 1,000,000 Dth/d by adding 32,100 hp of compression via six booster units.

The projects each have 10-year commitments totaling 600,000 Dth/d from affiliates of Anadarko Petroleum Corp. and DCP Midstream LP.

The Leawood, KS-based Tallgrass announced the projects last year when it held an open season for potentially up to 1.3 Bcf/d, but that process didn’t produce any suitable bids beyond the pre-arranged commitments from Anadarko and DCP, according to Friday’s filings.

The 1,700-mile REX stretches from Wyoming and Colorado to eastern Ohio. The pipeline, which went into service in 2009, was initially meant to transport Rockies natural gas west-to-east, but REX later reversed flows through its Zone 3 to accommodate east-to-west volumes out of the booming Appalachian Basin.

Tallgrass management has said it expects associated gas production out of the Rockies to increase over the next few years, driven by growth in the DJ Basin. The proposal to tap more DJ-produced gas also comes as Tallgrass prepares to replace REX west-to-east capacity commitments that are set to come off the books in 2019.

Tallgrass is seeking FERC authorization for Cheyenne Connector and the Cheyenne Hub Enhancement by February 2019 in order to place the projects in service by October 2019.