Negotiations continued Monday between New Brunswick officials and protesters opposed to shale development in the province, with the hope of lifting an anti-shale blockade that has obstructed a highway and vehicles owned by Southwestern Energy Co. (SWN) for more than a week. 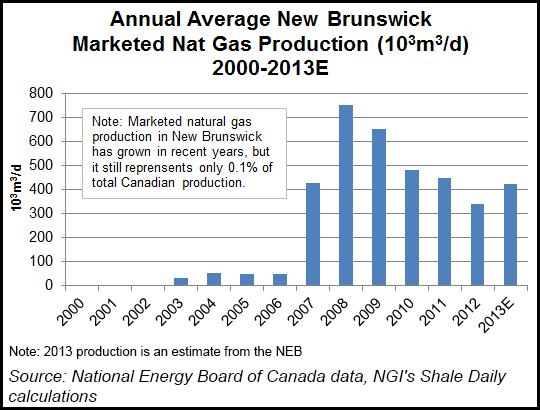 According to reports, Premier David Alward and members of the Elsipogtog First Nation resumed talks at a hotel in Fredericton, on Monday. That followed a three-hour meeting of Alward, three cabinet ministers and about 15 people representing the protesters at a hotel in Moncton, NB, on Sunday.

“Right now I am still hopeful, and the premier has been very receptive of our issues,” Elsipogtog First Nation Chief Aaron Sock said after Sunday’s meeting. “[Alward] is going to take them back to his people and see where we go from here.”

On Sept. 29, the Royal Canadian Mounted Police (RCMP) closed Highway 134 near Rexton, NB, after protesters that had been blocking the entrance to a nearby SWN facility had spilled into the road. The next day, protesters cut down trees and erected barricades blocking the highway and access to the SWN facility, where the company had parked its vehicles and equipment.

A provincial court had ordered the barricades removed on Thursday, but the protesters have not complied. Meanwhile, dozens of RCMP officers have surrounded the blockade sites.

Alward, a fervent supporter of shale development, had initially refused to meet with the protesters but changed his mind on Friday.

New Brunswick is home to the prospective Frederick Brook Shale. The emerging play lies beneath the Hiram Brook tight gas sands in both the Sussex and Elgin sub-basins (see Shale Daily, Dec. 7, 2010).

In August 2011, SWN decided to halt seismic testing in the province after a wave of threats, protests and acts of vandalism (see Shale Daily, Aug. 25, 2011).

Last February, the Alward government unveiled new rules for oil and natural gas development, including a requirement that operators disclose all of the chemicals used in hydraulic fracturing (see Shale Daily, Feb. 20).

According to National Energy Board of Canada data, marketed natural gas production in New Brunswick has grown in recent years, but it still represents only 0.1% of total Canadian production.