A buffer against higher natural gas prices that has traditionally been available to U.S. electric utilities, gas-to-coal switching, has become less tangible as more coal-fired power plants are retired and supply chain challenges linger, according to analysts. 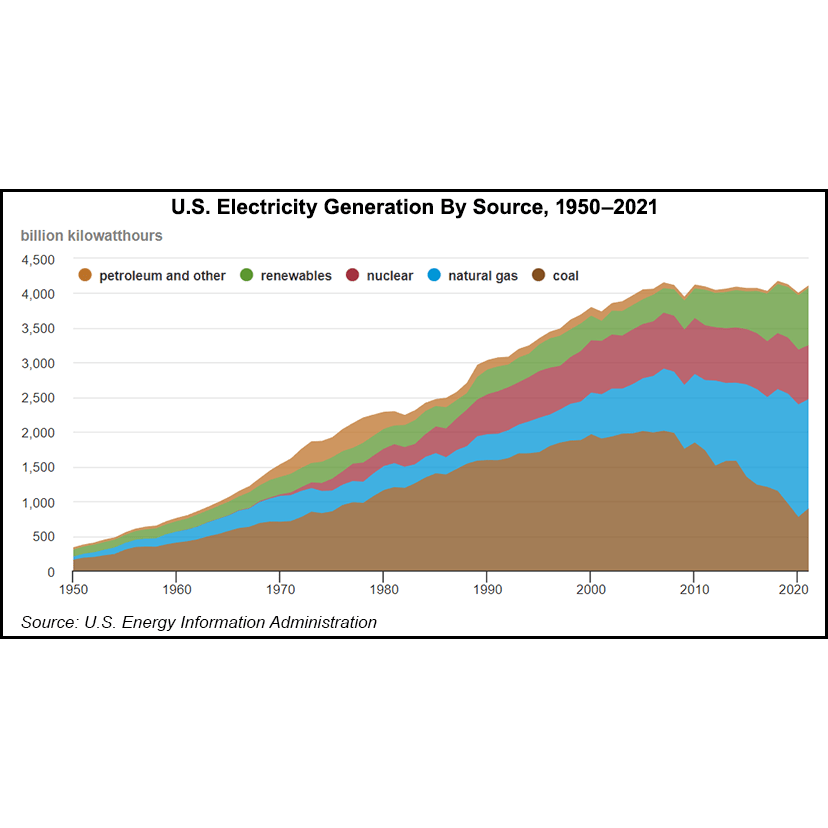 “I do not think utilities have any options, other than to burn dry gas in their” combined cycle gas turbine (CCGT) power plants and generate power needed in the United States, Chiron Financial LLC’s Tom McNulty, manager of investment, told NGI.

CCGT plants can run on natural gas or coal.

“Rising gas prices mean higher electricity prices across the board, for now that is a reality,” he said.

Goldman Sachs Commodities Research analyst Samantha Dart told NGI there has been “a significant drop in coal burns this summer, well beyond what plant retirements alone would explain. On the gas side, this has led to significant support for gas burns, which in June through August averaged 3.5 Bcf/d above what could be explained by weather, nuclear and renewable generation, and other factors.”

“Just two years ago natural gas pundits were wondering whether the rise of renewables would render 2020 as the high water mark for natural gas-fired power generation in the U.S., but that obviously has proven not to be the case,” said NGI’s Patrick Rau, director of strategy and research.

That is “up more than 7% year-over-year, which is impressive considering the spike in gas prices that really started with the Russian invasion of the Ukraine back in February,” he said.

Although he attributes the year/year increase in gas-fired power generation in part to the hotter-than-normal summer for much of the U.S., Rau said that “a good part of this is structural in nature as well from the continued retirement of U.S. coal plants.”

Many earlier coal-fired power station retirements were limited to “older marginal and/or peaking plants, but the recent retirements have been more baseload in nature,” he said. “That has taken away some of the price sensitivity to natural gas among power generators, and that is only going to grow as another 50 GW or so of coal-fired plants come offline.”

Environmental, social, and governance, aka ESG, “considerations are likely playing a not so insignificant role in this as well, particularly among investor owned utilities,” added Rau.

“In mid-2021, as the economy was recovering from the pandemic and temperatures were rising, utilities burned through a large portion of their coal inventories to meet load demand,” she said. “Since then, they have had difficulty replenishing stocks to typical levels. By the end of this year, inventories will shrink to 65% of where they were at the start of 2021.”

“As in many sectors, the railroads have experienced labor shortages and just narrowly averted a nationwide strike,” she said. “Producers have pushed some deliveries into 2023 because of the poor railroad performance.”

“Although rail availability has been tight in the Northeast region, gas was never more expensive than Appalachia coal,” she said. “So this challenge in gas-to-coal substitution was primarily impacting” switching from gas to Powder River Basin (PRB) coal – affecting power generation in the Midwest, Texas, and part of the Southeast.

Rising U.S. LNG exports also contribute to tighter U.S. gas supplies, “sometimes driving the market to look for gas-to-coal switching to balance,” said Dart. “This year, what also played a role was how long it took for U.S. gas production growth to pick up, which didn’t happen until the second half of the year.”

McNulty said that “LNG exports will keep going up as Europe desperately needs it, Asia wants it. The much higher export prices mean gas producers will sell their gas into the LNG complex all day long and twice on Sunday.”

“Utilities can hedge gas prices to some extent, but many are restricted by regulatory rules and the environment now is likely quite difficult for new hedges,” Sweezey said.

In terms of longer-term baseload power options for utilities, Sweezey said a nuclear resurgence is underway.

“We still expect gas to play a substantial role in the power mix through the early 2030s and then exhibit a structural decline,” he said. “Beyond these, retaining the existing nuclear fleet is becoming an increasing priority. In the last month we’ve seen California extend Diablo Canyon through the end of the decade…”

He added the Inflation Reduction Act “finally established a financial mechanism to value nuclear for its zero-carbon attributes, which previously had only existed at the state level, so there is policy momentum toward preserving the nuclear fleet.”

Meanwhile, “we don’t see the tightness in coal, which comes from tightness in rail availability as well as in coal production, fully resolved any time soon,” said Dart.

Goldman Sachs expects “the gas-to-coal switching process to unwind to some extent over the next two years, as U.S. LNG export capacity additions pause while U.S. gas production continues to grow. We expect this to result in gas pricing lower relative to PRB coal in Summer 2024.”

McNulty said that driving domestic dry gas production “to at least 115 Bcf/d as fast as we can,” compared to about 99 Bcf/d projected for the fourth quarter, would help power producers. “We have plenty of natural gas,” he said. “What must happen is probably out of the hands of the power utilities…And the nonsense that has blocked natural gas pipeline development and permitting in the USA must come to an end now.”