Thomas Boone Pickens Jr., who turned a borrowed investment to launch an oil company into billions of dollars, died Tuesday, leaving behind a legacy that will not be easily matched. He was 91. 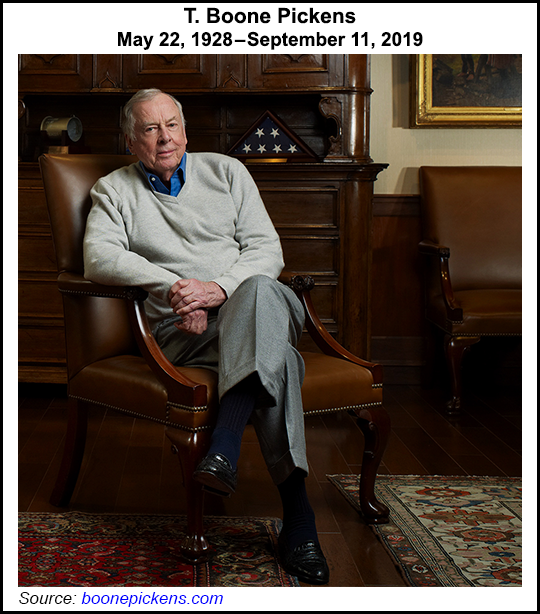 After battling back from a series of strokes and from head injuries he sustained in a fall in 2017, Pickens died in Dallas of natural causes, surrounded by friends and family, spokesperson Jay Rosser said.

The accolades were far and wide for the iconic oilman, who in 2017 was named by Forbes magazine as one of the 100 “Greatest Living Business Minds.”

“Boone,” as he was known to colleagues, “is one of those swashbucklers out of our history — a great, dynamic person who is a pioneer in multiple areas,” former Oklahoma Sen. Tom Coburn said. “He was a visionary. There are not many of those anymore. He was probably little influenced by power and money.”

A colorful character who could banter with anyone, from business executives and journalists to late-night talk show hosts, Pickens in 1957 founded what later became Mesa Petroleum. He left in 1996 and formed hedge fund BP Capital, which primarily focused on oil and gas commodities, as well as energy-dependent equities.

“He was just an old country boy from Holdenville, OK, but he could think his way around any Nobel Prize winner,” said Oklahoma State University (OSU) President Burns Hargis. “Boone was a legend, a change agent, a life force that rarely comes along.”

With his fortune made, Pickens in July 2008 launched a self-funded $100 million grassroots campaign, aka the Pickens Plan, to reduce U.S. dependence on foreign oil and increase the use of domestic natural gas.

He had earlier formed Pickens Fuel Corp. in 1997 to promote natural gas as the best vehicular fuel alternative. Reincorporated as Clean Energy Fuels Corp. in 2001, the company built natural gas fueling stations across the United States and in Canada.

“Words cannot express the sadness the Clean Energy family and myself feel at the loss of our co-founder, leader and friend,” CEO Andrew J. Littlefair said. “I worked closely with Boone for 32 years and he became a father-like figure and true mentor to me. If it wasn’t for his entrepreneurial vision to bring cleaner and domestic natural gas to the transportation market, Clean Energy Fuels Corp. would not exist today.

“Boone continued to serve on our board for over 20 years, allowing us to rely on his extensive experience as the company grew from a handful of natural gas fueling stations in California to over 500 across the country. We will miss his devotion, humor, generosity and most of all, love.”

Claiming at the time that he was “tired of complaining,” Pickens in 2008 began developing an energy plan to move the United States toward energy independence. He talked with politicians and colleagues, including the White House.

Failing to get the response he wanted, Pickens ponied up his own money to barnstorm the country and speak to anyone who would listen. In television ads, on his Pickens Plan website and in personal appearances, he spelled out how U.S. energy dependence on foreign oil and gas was an addiction that threatened the economy, environment and national security.

Pickens said at the time there was “a pitiful case of leadership,” in Washington, DC. “The American people do not understand energy…and they are not getting the truth.”

He published a book in 2008 that made the New York Times Best Seller list, “The First Billion is the Hardest,” which detailed what the country had to do to win back its energy independence. However, the Lower 48 unconventional revolution was beginning to produce spectacular results around the same time, leaving the plan’s intentions to languish.

So-called ”Boone-isms” were a staple of his personality. “Be willing to make decisions,” he once said. “That’s the most important quality in a good leader. Don’t fall victim to what I call the ”ready-aim-aim-aim-aim’ syndrome. You must be willing to fire.”

Pickens also once said, “Work eight hours and sleep eight hours, and make sure that they are not the same eight hours.”

Another Boone-ism: “If you’re on the right side of the issue, just keep driving until you hear glass breaking. Don’t quit.” As well as, “When you are hunting elephants, don’t get distracted chasing rabbits.”

Pickens enjoyed meeting people, but he was open to change, his family said. He grew to “understand the power of social media, how it helped me build a 3.5-million-person (Pickens Plan) army.” A May 2012 exchange on Twitter between Pickens and the rapper Drake drove home a social media lesson. “It’s one of the only ways that I would ever find myself in a dialogue with a rapper like Drake,” Pickens said at the time.

“Nobody has done what Boone did,” said retired Oklahoma Supreme Court Chief Justice Steve Taylor. “He wanted to enjoy the fun of giving away money, and seeing what happened with it. Scholarships. Football stadiums. Engineering schools. Hospitals.”

Pickens’ charitable donations are estimated at more than $1 billion, and through matching initiatives are near $2 billion. He also formed the T. Boone Pickens Foundation in late 2006 to support health and medical research and services, at-risk youth, and educational, entrepreneurial, political and athletic initiatives.

In addition, Pickens contributed more than $500 million to his alma mater, OSU, where the football stadium bears his name.

“I like making money,” Pickens once said. “I like giving money away. Giving money is not as fun as making it, but it’s a close second.”

As a youth, Pickens’ family moved to Amarillo, TX. He spent one year at Texas A&M University and then transferred to Oklahoma A&M, now OSU, where in 1951 he earned a degree in geology. He worked for Phillips Petroleum for three years before striking out on his own in 1954. With $2,500 in borrowed money, Pickens and two investors formed Petroleum Exploration Inc. He later formed Altair Oil and Gas Co. to explore in Western Canada.

Pickens is survived by five children, 11 grandchildren “and an increasing number of great-grandchildren,” the family said.

Plans for a memorial ceremony at Highland Park Methodist Church in Dallas were pending on Wednesday. In lieu of flowers, memorials may be sent to the T. Boone Pickens Foundation, 8117 Preston Road, Suite 260W, Dallas, TX 75225.