ExxonMobil Corp. will build its Permian Basin position to 1.5 million acres and Linn Energy LLC is becoming the biggest producer in the Hugoton Basin of Kansas after the producers agreed to a trade, sans cash, late Wednesday. 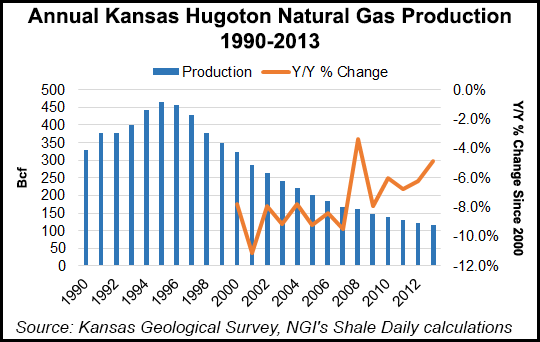 In the agreement, said to be for assets only, ExxonMobil is trading its Hugoton field properties, where it is the largest operator, which are comprised of more than 500,000 net acres and 2,300 operated wells.

In exchange, Linn is providing about 25,000 net acres for ExxonMobil to add to its Permian leasehold in the Midland subbasin, home to the Wolfcamp and Spraberry developments. ExxonMobil also would gain 1,000 acres in New Mexico’s portion of the prospective Delaware subbasin.

“This brings our leasehold position in the Permian Basin to over 1.5 million acres and in excess of 90,000 boe/d net,” said XTO President Randy Cleveland. “This transaction continues XTO’s growth in a key liquids play. We will continue to be the largest producer of natural gas and largest holder of proved gas reserves in the United States, and remain committed to the development of domestic natural gas consistent with the long-term view detailed in the ExxonMobil annual Outlook for Energy,” which was last issued in December (see Shale Daily, Dec. 12, 2013).

Linn, which is retaining about 3,000 boe/d in the Permian, is trading acreage in the West Texas counties of Midland, Martin, Upton and Glasscock, and in Lea County, NM, where Delaware Basin results are causing a frenzy. Virtually all of the acreage is located within the portion of the Midland Basin that is most prospective for horizontal Wolfcamp and Spraberry development, according to Cleveland.

An agreement in February with Endeavor Energy Resources LP in February gave XTO an operating equity in about 34,000 gross acres within the Midland’s Wolfcamp formation in Midland and Upton counties (see Shale Daily, Feb. 3).

The exchange is giving Linn and its operating subsidiary LinnCo LLC a portion of XTO’s interests in the low-decline, mature Hugoton gas field, including all non-royalty trust interests in the shallow formations. Current production is about 85 MMcfe/d, 80% gas. Total reserves are estimated to be 700 Bcfe, mostly gas, and 78% are proved, developed producing.

Linn, which already has identified more than 400 future drilling locations, would double its inventory in Hugoton on the trade, and it would become the leading operator. Potential synergies also are expected from additional throughput into Linn’s Jayhawk Natural Gas Processing Plant.

The exchange “is a strategic portfolio improvement for Linn that reinforces our commitment to mature, long-lived oil and natural gas assets with low and predictable decline rates,” said CEO Mark E. Ellis. “We believe this trade unlocks value,” with assets “that we believe are an ideal fit for our already sizeable position in the Hugoton Basin.”

In early 2012, Linn paid BP plc $1.2 billion for a Hugoton leasehold comprised of about 600,000 net acres; it marked the producer’s entry into the largest conventional gas field in the United States (see Daily GPI, Feb. 28, 2012). The transaction also gave it the Jayhawk plant, which at the time was processing up to 450 MMcf/d.

Once the transaction is completed, expected by the end of September, Linn still would hold about 30,000 net acres in the Midland with production of around 15,000 boe/d — and those acres are for sale or trade as well, said Ellis. “We continue to see strong interest in the market for a trade or sale of these remaining assets and believe there is significant additional value for our unitholders.”

In valuing the transaction’s worth to Linn, analysts at Tudor, Pickering, Holt & Co. referenced Occidental Petroleum Corp.’s huge Hugoton sale in February to an undisclosed buyer (see Shale Daily, Feb. 14). That leasehold extends from southwestern Kansas into parts of Oklahoma and Colorado, with average net production last year of around 110 MMcfe/d, 70% weighted to gas.

Based on that sale, the value “looks healthy” for Linn’s trade. Analysts estimated that Linn received more than $30,000/undeveloped acre for its Permian properties, using recent data from producers working the Midland.

Natural gas production in the Kansas portion of the Hugoton has declined significantly since its halcyon days in the mid-1990s, when annual output peaked at 465 Bcf. Production has declined every year since, falling to a low of 116.0 Bcf in 2013. However, the year-over-year declines have slowed recently, to a range of 4.9-6.8% since 2010, versus an average annual decline of 8.2% between 2000 and 2009.

The relatively stable, and therefore more predictable, decline profile of the Hugoton makes it a more “master limited partnership (MLP) friendly” asset, as does the fact that the active futures and basis swap markets mean that natural gas can be hedged for several years down the line, thereby helping to lock in the distributable cash flow that MLPs use to pay their dividends. Linn currently has a dividend yield of 10.1%.