Demand for natural gas will reach an all-time high this winter, and is likely to be matched by record domestic production, according to the U.S. Natural Gas Supply Association (NGSA). 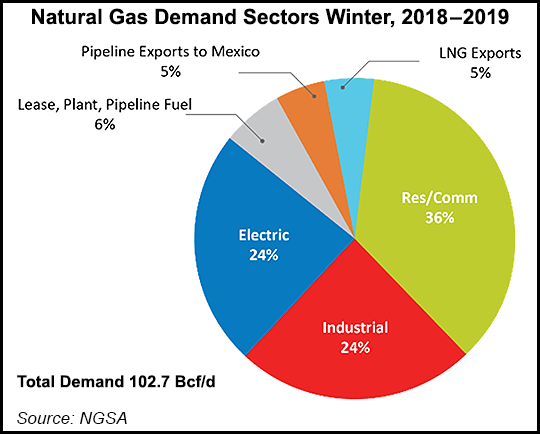 Demand exceeding even that of the polar vortex that slammed the country five years ago will be satisfied by soaring production this winter, resulting in flat pressure on prices compared to winter 2017-2018, NGSA said in its “2018-2019 Winter Outlook for Natural Gas,” which was released earlier this month.

NGSA expects below-average storage inventories, but forecasts production and flexibility in the market will allow the market to satisfy demand.

“The picture that emerged for the upcoming winter is of a natural gas market experiencing substantial growth in both demand and supply,” said NGSA Vice Chairman Donald Jenkins, who also serves as EQT Corp.’s chief commercial officer.

“Record demand will be driven by the longer-term shift to natural gas in the electric and industrial sectors resulting from natural gas’ competitive prices and environmental benefits.”

Demand from the residential and commercial, industrial, electric and export sectors this winter is forecast to reach a combined 102.7 Bcf/d, primarily because of an average 3.4 Bcf/d increase in electric, industrial and exports, according to analysts at Energy Venture Analysis.

“LNG exports and exports to Mexico by pipeline are projected to grow substantially, with LNG exports bringing the environmental benefits of our low carbon emissions to overseas customers, while providing jobs, economic benefits and stability to the U.S. market,” Jenkins said. “This marks the second year that the United States is a net exporter of LNG, but the amount we are exporting remains small compared to our supply base and the total U.S. market.”

At the same time, domestic natural gas production is expected to increase more than 7 Bcf/d (10%) compared with winter 2017-2018.

NGSA expects the natural gas in storage to begin winter at about 3.3 Tcf, which would be 14% below the five-year average.

Last week, the Energy Information Administration reported a 98 Bcf build into Lower 48 gas storage, well above most industry estimates ahead of the report. However, salt dome storage remains at a 120 Bcf deficit to year-ago levels and a 107 Bcf deficit to the five-year average. As of Sept. 28, storage stood at 2,866 Bcf, still well below both the 3,502 Bcf from a year ago and the 3,473 Bcf five-year average.