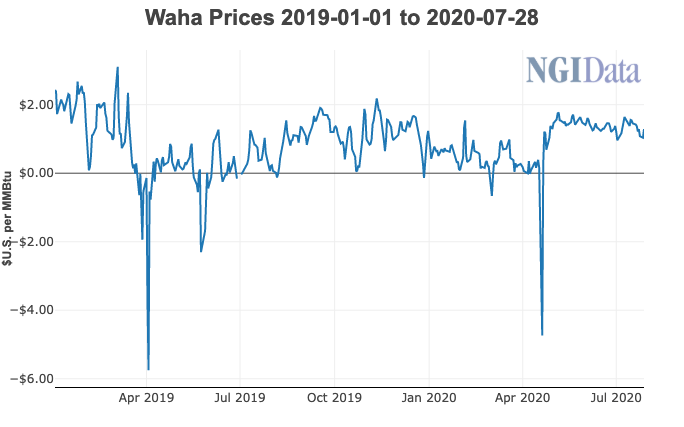 Natural gas exports from West Texas to Mexico could average up to 1.5 Bcf/d throughout the second half of 2020 and 2021, driven by the completion of new infrastructure south of the border, according to a new analysis by Rystad Energy.

So far in July, West Texas-Mexico volumes have averaged 640 MMcf/d, up 230 MMcf/d from the July 2019 average, said Ferguson, who noted that VAG’s electronic bulletin board is not yet showing gas flows.

The 1.5 Bcf/d projection for gas supplies from West Texas is a high-case scenario, Rystad analysts said, while in their lower-case scenario, exports remain flat at around 700 MMcf/d.

A growing export market in Mexico is welcome news for producers in the Permian, where Rystad expects natural gas output to return to record levels by late 2021 and reach 16 Bcf/d by the end of 2023.

The 16 Bcf/d figure, which assumes a $45-50/bbl West Texas Intermediate (WTI) oil price environment for 2021-2023, is a 2 Bcf/d downward revision from Rystad’s pre-coronavirus forecast, analysts said Tuesday, explaining that delayed pipeline approvals in the United States could limit outbound pipeline capacity from the Permian starting from 2023.

“Regardless of the state of West Texas-Mexico exports, we conclude that in a $45-50 WTI world, there will be a need for new gas takeaway projects from the Permian as early as 2023-2024,” said Rystad’s Artem Abramov, head of shale research.

“If these projects are not approved early enough, the basin might end up with another period of degradation in local differentials and potentially increased gas flaring.”

Rystad’s analysts expect the reactivation of curtailed oil production to drive rapid growth in basin-wide gas supply during the second half of 2020, “although further growth might be delayed until mid-2021 when activity is expected to recover substantially.”

Permian gas production averaged 11.41 Bcf/d last week, down 0.04 Bcf/d from the prior week, according to Ferguson.

Year-to-date gas production from the basin averaged 11.65 Bcf/d through April, according to the Railroad Commission of Texas, up from 11.61 Bcf/d for full-year 2019.

Rystad analysts remain confident that the Permian Highway Pipeline, aka PHP (2 Bcf/d), and Whistler Pipeline (2 Bcf/d) projects are moving ahead, offering outlets for gas from the Waha area in West Texas to reach the Gulf Coast, South Texas and Mexico.

Kinder Morgan Inc. executives said in their 2Q2020 earnings presentation that PHP is slated to be fully operational in early 2021.

“For other pipelines, however, serious concerns about feasibility remain and many projects have been delayed or put on hold,” Rystad analysts said. They noted that the Pecos Trail Pipeline is now on hold, and the Permian to Katy (P2K) pipeline “also appears to be inactive.”

Tellurian Inc., meanwhile, “has continued to advertise its future global gas market hub”  around its proposed liquefied natural gas export terminal in Louisiana, Driftwood LNG, which would be served by, among other sources, the company’s proposed Permian Global Access pipeline, “but the likelihood of any investment decisions in the short term remains low from our perspective,” the Rystad team said. The LNG developer in June said it could scrap the $4.2 billion pipeline in order to reduce costs.