Despite global uncertainty over a potential economic recession, global aluminum supply will continue to be under pressure by high demand through this year, according to executives at top U.S. producer Alcoa Corp. 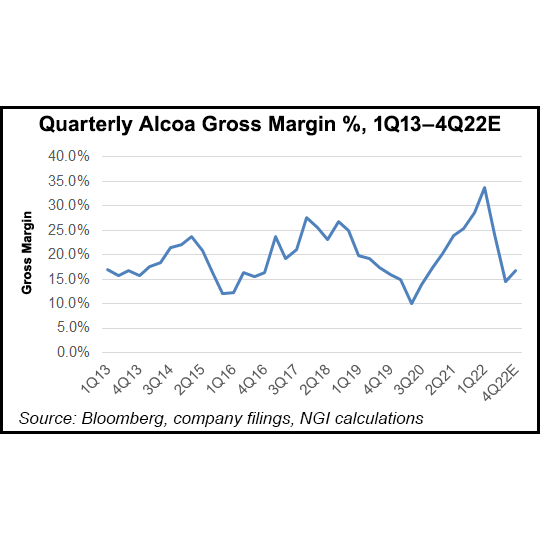 “European smelters and more recently one smelter in North America have cut capacity due to higher energy prices,” CEO Roy Harvey said on a conference call detailing second quarter earnings. “On the demand side, while there is some global uncertainty in the near term, demand continues to grow.”

He added that, “Given the price and cost pressures over the past quarter, we also see significant amounts of global alumina and aluminum capacities that are likely to be cash negative based on an analysis through June, which means global operating capacities will remain under pressure.”

Headquartered in Pittsburgh, the company has operations across 10 countries.

Soaring natural gas prices led to the company reaching an agreement for a two-year curtailment of its smelting capacity at its San Ciprian smelter in northwestern Spain. “We successfully completed that full curtailment this year and we’re actively working on arranging competitive power arrangements to support the agreed upon restart,” Harvey said.

Daily production at its San Ciprian refinery is also down 15%, where natural gas prices “are higher there in fact than anywhere else that we operate” climbing to more than $25/gigajoule, “a nearly fivefold increase since early 2021.”

The energy picture in Europe remains “a very complicated situation changing each and every day” Harvey said, not only for natural gas but “also the knock-on impacts to the electricity market.”

Due to “exorbitant natural gas prices,” the San Ciprian refinery is “simply a loss-making enterprise at this point,” Harvey said.

Harvey said the company has spot exposure in Spain along with a smelter plant in Norway. He added that southern Norway is less impacted by European energy prices than “in places like Spain and other places, so that helps to keep the energy prices a little bit more realistic. Although we have seen pretty significant increases.”

The company’s facilities in Mujin, Norway and Shardall, Iceland have long-term power contracts, and are “not exposed to spot issues.”

The company had a good quarter even as aluminum prices have dropped this year by more than 10%.

“There’s a lot of uncertainty, there’s a lot of questions particularly in Europe and of course, China with Covid,” Harvey said. “So there’s the potential that we continue to see customers stepping away, but realistically what we’re seeing right now is that demand continues to grow for the year. And so, we continue to have a good full order book.”

He added that nearshoring opportunities favored the company.

“I think we’ve seen that people realize their supply chains are fickle and I think that’s not just aluminum that’s across the board. And so what we’ve seen is more and more interest over these last two to three years of how can you guarantee not just the quality and the price but also the fact that you’re going to have that material when you need it because when don’t have the material, you’re not going to be able to produce,” Harvey said.

“And so for us it’s an advantage for Alcoa because a lot of our capacity and a lot of our customers happen to sit in North America and Europe, which is where we have also the strong premium environments, where we offer our value added products and where we can actually create more value,” he added.

Net income attributed to the Pittsburgh-based company was $549 million ($2.95/share) in the second quarter, compared to $309 million ($1.63) in the same period last year.

The company also announced returns to shareholders. “We have returned more than $380 million so far this year to our investors, and today we announced an additional $500 million authorization for future stock repurchases,” Harvey said.