Bulls were clearly in the driver’s seat for the week ending Nov. 22. The NGI National Spot Gas Average rose 11 cents to $3.69, and all actively traded points scored gains. Leading the pack higher was the trading at the Algonquin Citygates Friday for weekend and Monday delivery with a whopping $9.51 rise to $14.01. For the week, prices at the Algonquin Citygates rose a hefty $1.07 to $6.96. Other Northeast points weren’t far behind. Tennessee Zone 6 200 L added 80 cents to $6.57 and Iroquois Zone 2 was up 49 cents to $4.67. Deliveries to Transco Zone 6 New York added 44 cents to $4.08. 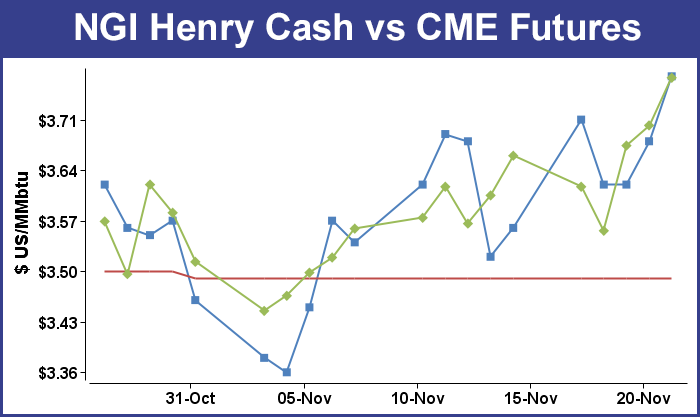 At the low end of the spectrum gains of 5 cents were seen in South Louisiana and the Midcontinent. ANR SE and Tennessee 500 L both added a nickel to $3.58 and $3.61 respectively as did Panhandle Eastern and Northern Natural Ventura to $3.39 and $3.70, respectively.

December futures rose 10.8 cents for the week to $3.768, aided by Thursday’s Energy Information Administration report for the week ending Nov. 15 of the first withdrawal of the heating season, a stout 45 Bcf.

In Friday’s trading spot natural gas for weekend and Monday delivery jumped more than 30 cents, thanks to multi-dollar surges at points in the Northeast ahead of the region’s first real freeze. Gains were widespread and deep, and fewer than a handful of locations showed red ink. At eastern market points gains were in the double- and triple-digit range, led by deliveries to the Algonquin Citygates, where weekend and Monday gas jumped $9.51 to average $14.01. Futures had a hard time keeping pace. At the close, the December contract had added 6.6 cents to $3.768 and January had risen 7.1 cents to $3.811.

Futures traders see market momentum clearly driven by weather forecasts and a speculative community nursing losing positions on the short side of the market. “This market saw a small recovery overnight that would appear to set the stage for a strong finish to this week’s trade,” said Jim Ritterbusch of Ritterbusch and Associates. “Although some moderation is being seen in the extended eight-14 day temperature forecasts, below-normal patterns, especially within the eastern one-third of the country, appear capable of maintaining upward price momentum into the Thanksgiving holiday period. Of course, as seen on numerous occasions, temperature views can shift considerably during a weekend and as a result, buyers will likely be reticent in approaching the long side [Friday].”

Ritterbusch was looking for another 13 cents to the upside. “With expected chart resistance at the $3.70 level now cleared, we feel that a further advance to about $3.83 is likely within the next couple of trading sessions. While the market has likely discounted some unusually strong storage withdrawals that will be issued out to about Dec. 12th, we feel that surprises are apt to skew bullish amidst international trade that could see some slippage in imports amidst some possible export gains into Mexico.”

The driving force behind the price surge was forecasts for bone-rattling cold. Temperatures by Monday for much of the Northeast were expected to be nearly 15 degrees below normal. AccuWeather.com predicted that Boston’s high Friday of 48 degrees would slide to 45 on Saturday before dropping further to 35 on Monday. The normal high in Boston is 49. New York City’s 57 Friday high was forecast to fall to 49 Saturday and also reach a bone-chilling 35 on Monday. The normal high this time of year in the Big Apple is 52.

Rocky Mountain cash points posted solid gains for weekend and Monday packages as major markets in the Midwest were forecast to experience temperatures as much as 15 to 20 degrees below normal. “January-like cold is on the way for areas of the Midwest that were ravaged by tornadoes on Sunday, bringing dangerous and life-threatening low temperatures to those still without power,” said AccuWeather.com.

“[H]undreds are still without power in Washington and Peoria, IL, making the overnight lows Saturday and Sunday extremely dangerous. The highs during the day this weekend can easily feel like the dead of winter cold,” said AccuWeather.com meteorologist Bernie Rayno. “Temperatures are forecast to drop 15 to 20 degrees below normal this weekend. Saturday will usher in temperatures in the 20s with biting wind from the north. The wind will drop [wind chill] temperatures into the single digits and below zero at times. In the early hours of Sunday morning, the mercury could fall into the teens.”

Temperatures throughout the region were expected to be below normal. AccuWeather.com predicted the high in Chicago Friday of 38 would drop to 26 Saturday but rebound to 41 Monday, still 5 degrees below normal. Omaha was anticipated to see Friday’s high of 30 drop to 22 Saturday before making it up to 40 on Monday. The normal high in Omaha is 44. St. Louis’ Friday high of 42 was seen dropping to 36 Saturday but then rising to 45 on Monday. The seasonal high in St. Louis is 52.

A Rocky Mountain producer saw the cold perhaps impacting production. “We could get freeze-offs. Temperatures are supposed to go down to 20 degrees in Amarillo, and this is November. If we are going to have a run in the gas market, it is going to be between now and the end of February since we had record cold last March and April. The best chance is in December.”

MDA Weather Services in its Friday morning one- to five-day outlook showed the epicenter of forecast cold in West Texas at 15 or more degrees below normal but extending in a broad ridge to the southern tip of Lake Michigan. Further out in its 11-15 day outlook, below-normal temperatures are expected north of a sinuous arc from Washington to northeast Colorado as far south as South Carolina. Confidence in the forecast was rated low.