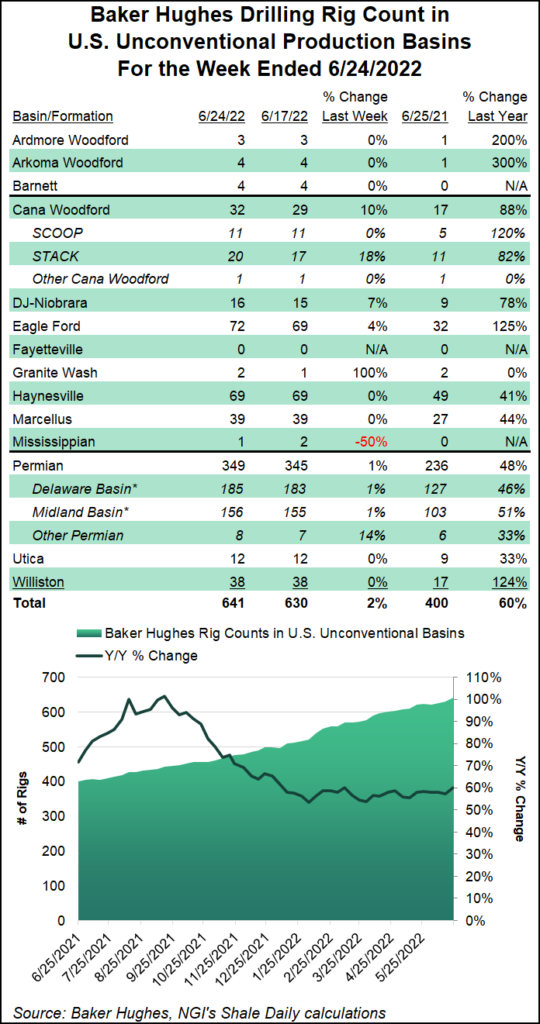 Domestic drilling gains for the week included 10 oil-directed rigs and three natural gas-directed rigs. The 753 active U.S. rigs as of Friday compares with 470 in the year-earlier period, according to the BKR numbers, which are based partly on data from Enverus.

All of the net increase in the United States resulted from land drilling, with the Gulf of Mexico count unchanged at 15. Eleven horizontal units were added week/week, alongside two directional rigs.

Looking at changes by major region, the Permian Basin led the way with an increase of four rigs for the period, bringing its total to 349, versus 236 in the year-ago period. The Cana Woodford and Eagle Ford Shale each added three rigs to their respective tallies. Elsewhere among plays, the Denver Julesburg-Niobrara and Granite Wash each added one rig, while the Mississippian Lime saw one rig exit for the period.

Counting by state, Texas picked up six rigs week/week, raising its overall count to 362, up from 221 a year ago. Colorado added three rigs for the week, while Louisiana, New Mexico, Oklahoma and Wyoming each added one, the BKR data show.

According to the latest U.S. Energy Information Administration (EIA) Drilling Productivity Report (DPR), the Lower 48 DUC count dropped by 46 units to 4,249 from April to May.

Since peaking in June 2020, the DUC inventory has declined 60% as E&Ps maintained a cash-preservation stance and kept drilling subdued, ESAI noted.