The 2.6 Bcf/d Sur de Texas-Tuxpan marine pipeline, which will stretch from South Texas to Veracruz in Mexico, is set to enter service in the coming weeks, the president of TransCanada Corp.’s Mexico unit said earlier this month. 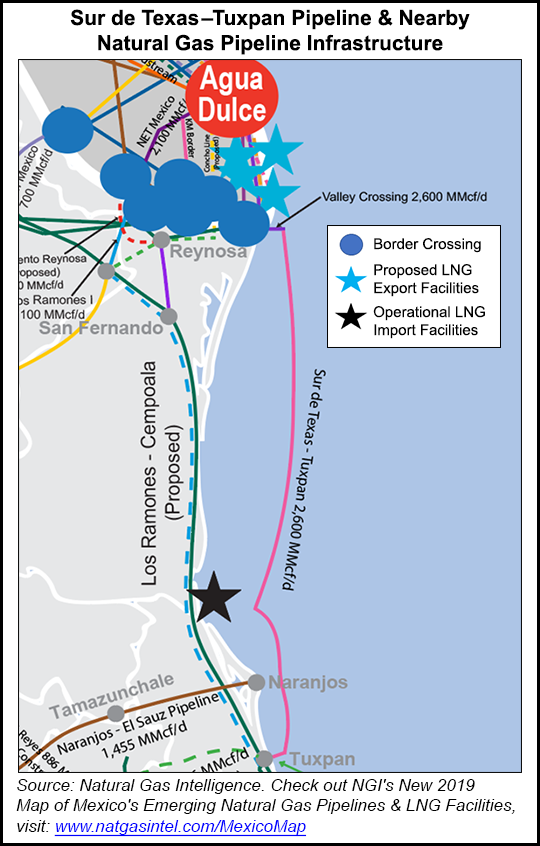 “We were at the mercy of some bad weather,” Robert Jones said at Industry Exchange’s Mexico Infrastructure Projects Forum in Monterrey, Mexico on Jan. 17. “But we expect to get going in a few weeks. We managed to do a direct pipe connection in Tuxpan which worked out well. It’s a massive project and we are very excited about it getting started.”

The $2.1 billion underwater pipeline, which stretches nearly 500 miles through the Gulf of Mexico from Brownsville, TX, to the Tuxpan port in Veracruz state, is considered an important part to move supply from gas-rich basins in Texas to southern Mexico. The startup would come on the heels of the cancellation of the tender for a floating storage and regasification unit (FSRU) in the Pajaritos port in Veracruz.

The pipeline, a joint venture with Sempra Energy’s Mexico unit, Infraestructura Energetica Nova (IEnova), was partially invaded by water because of storms last year, and is coming online a few months after initially projected.

Jones said while the new pipeline is underpinned by the needs of Mexican state electricity company Comision Federal de Electricidad (CFE), there was “some potential to expand capacity” for other parties.

As further evidence that Sur de Texas-Tuxpan is soon to be in-service, Valley Crossing Pipeline, the U.S. system that feeds the Sur de Texas-Tuxpan line, issued a notice on its electronic bulletin board on Wednesday that “nominations are now open through 2/28/2019.”

“That’s not likely a coincidence, considering bidweek starts on Friday,” noted Patrick Rau, NGI‘s Director of Strategy & Research. In the United States, monthly gas transactions occur during bidweek, which spans the final five trading days of a month for flow the following month.

“The gas won’t necessarily flow into Sur de Texas on Feb. 1 if that pipe isn’t quite ready, but it is entirely possible for flows to start on that date,” Rau said.

The pipeline eventually is to connect to the 886 MMcf/d Tuxpan-Tula and Tula-Villa de Reyes pipelines, allowing plentiful Texan gas to flow to industry and power generators in central Mexico. Both these projects, however, have experienced heavy delays and the exact startup of each remains uncertain.

“The Tuxpan-Tula stretch has two segments that are waiting on indigenous consultations by energy ministry (Sener),” Jones said. He added, “our plan is that hopefully in the short term we can meet the needs of clients until Tuxpan-Tula is ready.”

The Tula-Villa de Reyes segment is delayed as the National Institute of Anthropology and History, or INAH, inspects archaeological remains along its route.

“We plan to put the pipes online in phases during the course of the year,” Jones said.

Originally slated to come online in late 2017, Tula-Villa de Reyes is expected to be in service by the second half of 2019, with Tuxpan-Tula starting up in 2020, according to TransCanada. However, it is uncertain whether the delayed portions in the state of Hidalgo will be completed as originally proposed.

“The biggest challenges to pipelines getting built in Mexico are permitting and rule of law. It’s not financing, but stakeholder challenges,” Jones said.

“If you want to develop infrastructure, you are going to face opposition,” he said. “You have to work with the government and the companies involved in explaining the benefits of these projects to the communities. A lot of times the opposition party will take control and convince communities not to continue.”