Although physical traders typically try to get their deals done before the Energy Information Administration’s (EIA) natural gas storage report, those traders must have had a sixth sense of the bullish news as physical prices scored robust double-digit gains. 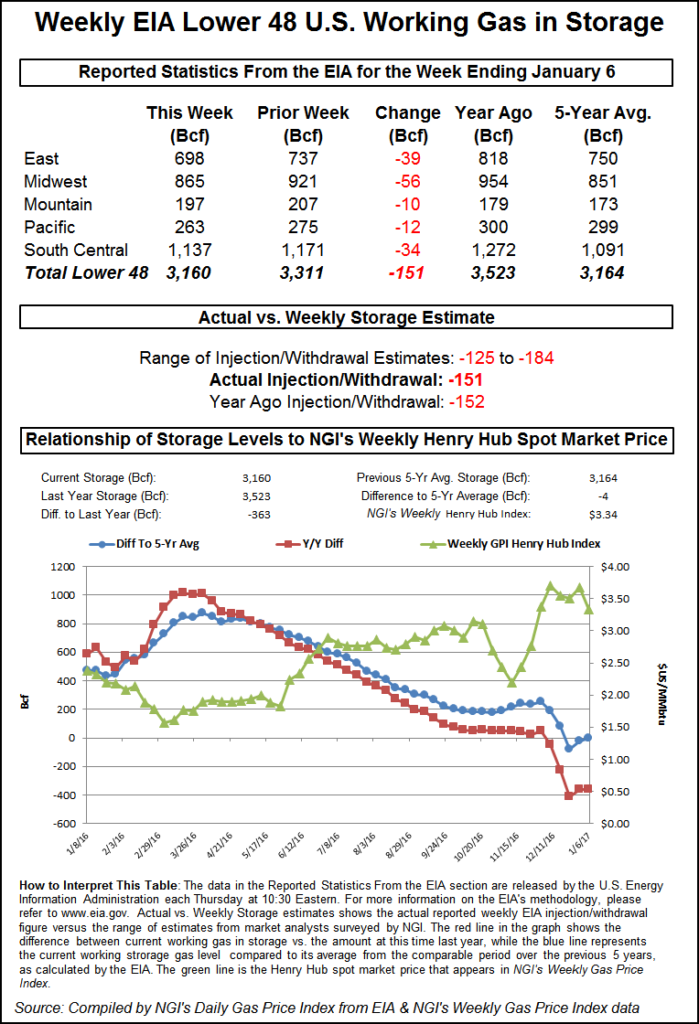 A few points were down by a couple of pennies, but most locations scored advances of a dime or more. The NGI National Spot Gas Average gained 16 cents to $3.34, led by gains in the Northeast off forecasts of falling near-term temperatures as well as supportive power pricing. February natural gas jumped 16.2 cents to $3.386 and March added 15.0 cents to $3.367. February crude oil advanced 76 cents to $53.01/bbl.

Natural gas futures traded sharply higher Thursday morning after the EIA reported a storage withdrawal that was greater than what traders were expecting. It reported a 151 Bcf storage withdrawal in its 10:30 a.m. EST release, whereas traders were expecting a pull of about 7 Bcf less. February futures reached a high of $3.450 immediately after the figures were released and by 10:45 a.m. February was trading at $3.417, up 19.3 cents from Wednesday’s settlement.

“You had all those shorts that panicked out and pushed the market higher,” said a New York floor trader. “We are looking for it to hold $3.41.”

“Following a very bearish print last week [-49 Bcf] prices have quickly spiked this morning, as we expected a number over 150 Bcf to do,” said Harrison NY-based Bespoke Weather Services, “and we see $3.50 as likely to be hit before the week is over as we see significant week-over-week tightening.”

Randy Ollenberger of BMO Capital Markets said he “believes the storage report will be viewed as positive. Storage has dropped to five-year average levels, and we believe that U.S. working gas in storage could trend toward five-year lows by the end of the 2017 winter withdrawal season, assuming normal weather.”

Inventories now stand at 3,160 Bcf and are 363 Bcf less than last year and 4 Bcf less than the five-year average. In the East Region 39 Bcf was withdrawn, and the Midwest Region saw inventories decrease by 56 Bcf. Stocks in the Mountain Region fell 10 Bcf, and the Pacific Region was down 12 Bcf. The South Central Region dropped 34 Bcf.

Overnight weather models suggested Alaska ridging late in the month consistent with a return of colder temperatures to the Lower 48.

The ongoing pattern of volatile weather patterns continues. “Mostly minor short-range changes are noted this morning, but we must continue to watch this last piece of Arctic air from the former pattern scrape the Plains (maybe northern Texas), the Midwest, and then the East Coast this weekend for some briefly colder risks,” said Matt Rogers, president of Commodity Weather Group in a Thursday morning report to clients.

“Otherwise, the six-10 day is super warm with warmer risks as we show widespread strong above normal anomalies during the period following the three-day holiday weekend…Massive changes are also seen over the Alaska area — turning it from a trough to a ridge in the 11-15 day — to set the stage for a return to a colder pattern in the final days of January.”

In physical trading, sliding temperature forecasts were enough to prompt dollar-plus gains in the Northeast. AccuWeather;com forecast that Boston’s Thursday high of a balmy 60 degrees would drop to 44 Friday before sliding to 30 Saturday, 6 degrees below normal. New York City’s 62 high Thursday was seen falling to 46 Friday and 33 on Saturday, 5 degrees below normal.

SoCal Border Avg. and related points firmed as El Paso declared a force majeure Wednesday on flows west of a point in southern Arizona. According to industry consultant Genscape, roughly 400 MMcf/d was cut at the pipeline’s Casa Grande point about 50 miles southeast of Phoenix. “The pipeline has been able to accommodate for this cut by rerouting flows, although deliveries to SoCal and North Baja have also seen decreases.

“The full title of the force majeure notice references ‘Casa Grande to Wenden,’ [and] Wenden is located about 150 miles northwest, considerably closer to the California-Arizona border. EPNG identified a pipeline anomaly, which will require the line to be excavated and repaired, and the end date of the maintenance is still indeterminate.”

Other market centers were also mostly higher. Gas at the Chicago Citygate rose 7 cents to $3.32, and deliveries to Henry Hub changed hands 4 cents higher at $3.32. Gas on El Paso Permian slipped 3 cents to $3.02, and packages at Opal improved 11 cents to $3.32.