Expectations for a hefty late-season withdrawal from this week’s Energy Information Administration (EIA) storage report helped natural gas futures continue to rebound Wednesday following a sharp sell-off earlier in the week. In the spot market, a mix of spring and winter weather in the forecast — including snow in the Rockies and highs in the 60s and 70s further east — produced a mix of price moves; the NGI Spot Gas National Avg. added 2.0 cents to $2.755/MMBtu. 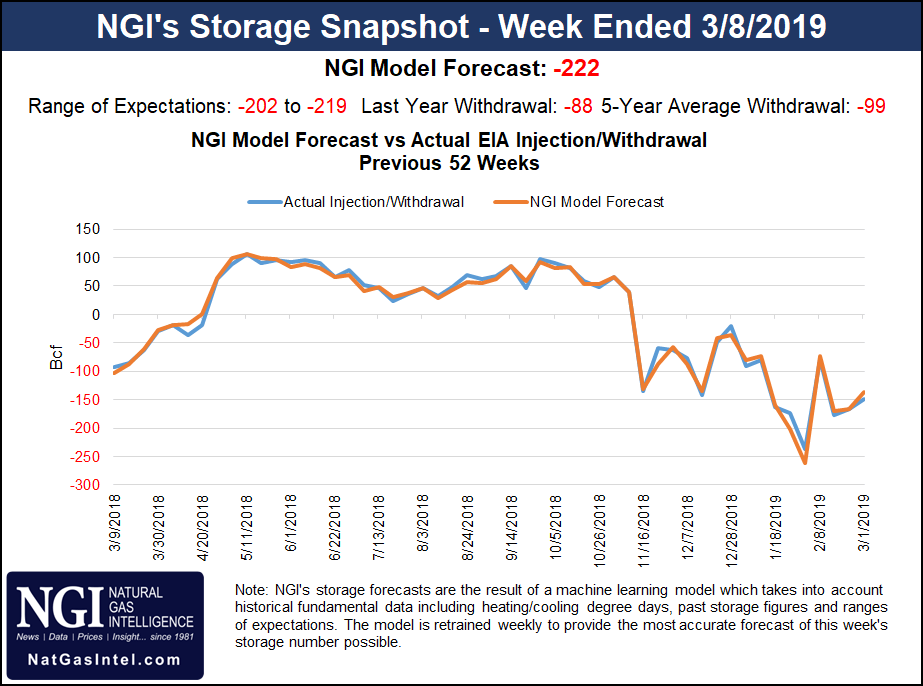 The data “continues to advertise cold returning over all regions east of the Plains this weekend through next week, followed by mild to warm conditions dominating most of the country March 23-27,” and it’s “increasingly likely” warmth will persist through the end of the month, according to the forecaster.

Unless cold returns “aggressively” in early April, odds favor the withdrawal season ending once next week’s cold blast has been accounted for, putting end-of-season stocks at around 1,085 Bcf, NatGasWeather said.

“Deficits in supplies remain bullish, as they are expected to increase to over 560 Bcf” after Thursday’s EIA report, the forecaster said. But “while the background state is bullish in terms of deficits, the markets are stating they are comfortable with prices well under $3 due to near-record production and the build season coming into view.”

Estimates this week have the EIA reporting a withdrawal greater than 200 Bcf Thursday, reflecting the intense cold that swept across the Lower 48 last week.

As of Wednesday afternoon, a Bloomberg survey showed a median expectation for a 210 Bcf withdrawal for the week ended March 8, based on 11 estimates ranging from minus 202 Bcf to minus 219 Bcf. Intercontinental Exchange EIA financial weekly index futures settled Tuesday at a withdrawal of 205 Bcf. NGI’s model predicted a 222 Bcf withdrawal for this week’s report.

A pull north of the 200 Bcf mark would be bullish compared to historical norms and would significantly widen defitics. Last year EIA recorded an 88 Bcf pull for the period, and the five-year average is a withdrawal of 99 Bcf.

“With a huge withdrawal expected Thursday, traders most likely would prefer to wait until after the storage report is released before expanding short positions,” Weissman said. “Further, weather over the next 10 days is expected to be cold enough to keep cash prices near current levels.

Meanwhile, reported inventory for Transcontinental Gas Pipe Line (Transco) is on track to end the heating season at its lowest level since 2014, according to Genscape Inc.

“Storage levels at the Washington Storage Field in St. Landry Parish, LA, are currently at 28.5 Bcf, 8.8 Bcf lower than any year since 2014 and just 2.4 Bcf higher than corresponding 2014 levels,” Genscape analyst Josh Garcia said. “This winter’s average withdrawal rate of 236 MMcf/d at Washington was the highest since winter 2013/14, though the withdrawal rate tapered off to 169 MMcf/d by the beginning of February.

“Considering this slower withdrawal rate, Washington storage levels are projected to land at 25.1 Bcf by the beginning of April, 11.1 Bcf lower than any year since 2014.”

Reported inventories at the smaller Eminence Storage Field in Mississippi are currently roughly in line with 2014 levels, Garcia said, who noted that Transco has reported total storage is at 47.2% of capacity, a figure that includes unreported stockpiles outside of the Washington and Eminence facilities.

Turning to the physical market, Old Man Winter is refusing to go quietly this week, at least for those living in the central United States. Meanwhile, for East Coast dwellers spring is in the air.

“Temperatures will rapidly warm across the Great Lakes and East the next several days with highs of 50s to near 70 degrees from Chicago to New York City,” NatGasWeather said in its one- to seven-day outlook Wednesday. “The southern U.S. and Mid-Atlantic coast will be spring-like with highs of 60s to 80s for very light demand.

“A strong storm will track through the Rockies and central U.S. with rain and snow Wednesday to Thursday, but with only modestly cold air that will push as far south as North Texas. The West remains unsettled but warming late this week. Colder weather systems will sweep east of the Rockies this weekend through next week with lows from the single digits to 30s for stronger demand.”

Forecasters at AccuWeather Wednesday were calling for a “bomb cyclone” to create blizzard-like conditions from Colorado to North Dakota, including heavy snow and strong winds. The forecaster said the storm was expected to undergo “bombogenesis,” with the barometric pressure falling quickly.

Areas along the storm track were expected to receive 12-18 inches of snow, with some places seeing up to 26 inches, according to AccuWeather.

“Many record warm minimum temperatures are forecast to be set along the Eastern Seaboard Friday morning,” NWS said.

This contrasts with temperatures in the West, where highs were expected to come in 15-30 degrees below average in the Rockies and High Plains through the end of the work week, according to the forecaster.

Despite the tempestuous forecast, the price action was relatively tranquil in the Rockies Wednesday. Cheyenne Hub added 8.0 cents to $2.640.

Meanwhile, the pleasant conditions in the forecast further east kept a lid on spot prices throughout the Northeast, Appalachia and Southeast Wednesday. Transco Zone 6 NY dropped 12.0 cents to average $2.615, while Dominion South shed 6.0 cents to $2.475.

Tennessee Gas Pipeline (TGP) is expected to begin maintenance Thursday at Station 847 in Grenada County, MS, and the work could limit operational capacity there to 410 MMcf/d until March 28, a reduction of 245 MMcf/d, Genscape analyst Dominic Eggerman told clients Wednesday.

“Net flows through the station have averaged 445 MMcf/d for the past 30 days, but this figure is due to recent warmer weather,” Eggerman said. “With the upside for colder weather in the Northeast beginning next week, we could see additional impacts to gas headed towards the EIA East region.”

Elsewhere, West Texas cash basis continued to strengthen Wednesday, with locations including Waha and El Paso Permian building on a run of day/day gains that has seen the constrained producing region close the gap on benchmark Henry Hub this week.

After lifting a force majeure at its Compressor Station 102 ahead of schedule this week, Natural Gas Pipeline Co. of America has deconstrained 245 MMcf/d of flows heading for the pipeline’s Market Delivery Zone, according to Genscape analyst Matt McDowell.