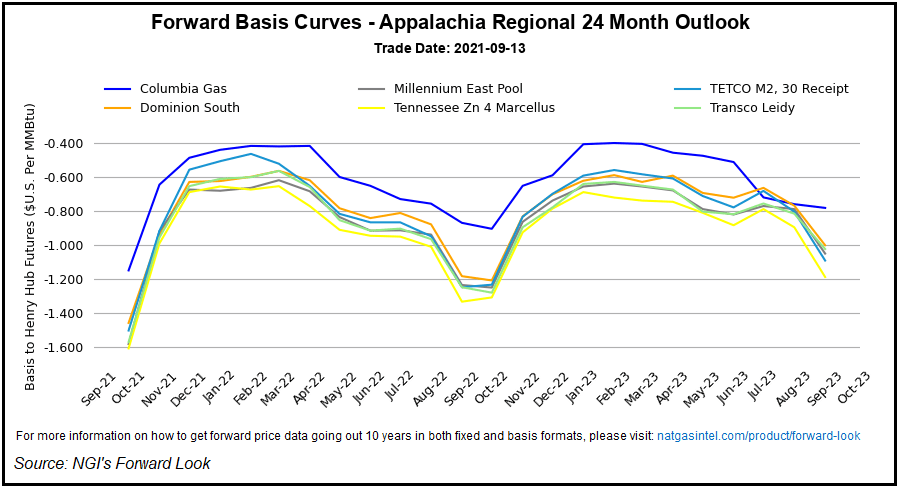 Tropical Storm Nicholas made landfall in Texas overnight Monday — after briefly reaching hurricane status in the Gulf of Mexico (GOM). Forecasters warned of storm surges and flooding rains through at least Wednesday that could impact production. This was developing in the wake of Hurricane Ida, which knocked offline the vast majority of GOM production after it struck on Aug. 29.

Federal estimates showed that nearly half of pre-Ida gas output in the region remained sidelined on Tuesday. The Bureau of Safety and Environmental Enforcement (BSEE) said midday Tuesday that 48.20% of gas production in the GOM was shut in, while 39.57% of oil production was still out of commission.

“A significant part of the U.S. Gulf’s oil and gas machine is still shut, which is a bullish enough event on its own” for prices. However, “the prospect of additional production disruptions can only strain supply further and drag prices up as a result of tight market balances,” Rystad Energy analyst Nishant Bhushan said.

Nicholas had already doused areas of Texas with 10 inches of rain, and up to 20 inches in total was possible.

Projections Tuesday put Nicholas on a path to cover more of southern Louisiana than initially expected. It could then turn toward Mississippi.

“With this projected path, some more of the counties that were recently hit by Ida in Louisiana and Mississippi will likely see heavy rains again,” Wood Mackenzie analyst Kara Ozgen said. The storm “has the potential to disrupt some power restoration and recovery work currently underway.”

The supply risks caused by menacing storms punctuated worries about already anemic stockpiles of natural gas ahead of the winter season. These concerns extend to Asia and Europe as well, fueling a global boom in gas prices.

U.S. production was already light relative to pre-pandemic levels before Ida. It has hovered near 90 Bcf in recent days – well below the 92 Bcf/d average reached earlier in the summer and far below the 96 Bcf/d peak level prior to the arrival of the coronavirus.

At the same time, domestic demand proved exceptionally strong throughout the summer, as searing heat fueled unrelenting cooling needs across the Lower 48. Seasonally lofty temperatures have persisted into September, boosting cash prices and futures. LNG demand has held near record levels because of the supply concerns in Europe and Asia, adding upward price pressure.

All of this leaves little room for utilities to inject substantially more gas into storage ahead of winter. Underground supplies are on pace to fall short of 3.5 Tcf at the close of October – the typical end of injection season — well below the 3.9 Tcf stored last year.  If winter proves notably cold or starts early, supplies could run light, and this possibility is keeping a fire under gas prices, NatGasWeather said.

The U.S. Energy Information Administration (EIA) last week reported utilities injected 52 Bcf natural gas into storage for the week ended Sept. 3. The build lifted inventories to 2,923 Bcf, but that was well below the year-earlier level of 3,515 Bcf.

Next-day cash prices continued to climb higher Tuesday amid the supply challenges and ongoing cooling demand in several regions of the country.

“Heavy rains and strong winds from Tropical Storm Nicholas will stall over East Texas and Louisiana the next few days with areas of flooding and comfortable highs of lower 80s,” NatGasWeather said Tuesday.

However, through the rest of the trading week, California to West Texas should remain hot with highs of 90s to 100s “as high pressure rules,” the firm said. “The East will be warm to very warm with highs of 80s to near 90,” supporting solid national demand.

Against that backdrop, prices in Appalachia jumped on Tuesday, with Columbia Gas up 30.0 cents day/day to average $5.055 and Millennium East Pool ahead 28.0 cents to $5.035.

Wood Mackenzie analysts noted that supply constraints linked to the rupture of a segment of the El Paso Natural Gas Pipeline continued to restrict Permian flows west into Southwest markets, limiting supplies as heat continues to swelter. The Line 2000 segment near Coolidge, AZ, exploded on Aug. 15.

Looking ahead to the weekend and early next week, forecasters said heat would remain the dominant theme in the West, as well as much of the southern United States. The Midwest to Northeast will also be warmer than normal.