With warnings of higher prices still to come, natural gas forward prices mounted hefty gains for the trading period ending May 25, with prices nearing $9.00/MMBtu across much of the country and cresting $10.00 in California, according to NGI’s Forward Look. 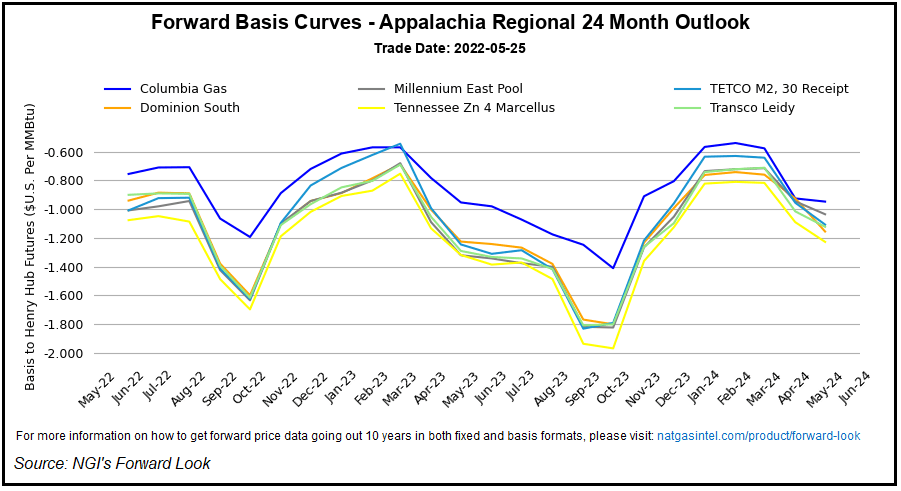 June fixed prices averaged 65.0 cents higher on the week, while the balance of summer (June-October) jumped 58.0 cents on average, Forward Look data showed. Prices for the upcoming winter (November-March) picked up an average 45.0 cents, with double-digit prices seen throughout the Northeast. Notably, the winter strips for locations in New England – long-plagued by tight capacity – already have surged above $20.00.

The region isn’t likely to get any relief for at least another year. Equitrans Midstream Corp. earlier this month said its Mountain Valley Pipeline (MVP) would not come online until the second half of 2023. Since receiving approval from FERC in 2017, the project has faced numerous adverse legal and regulatory decisions that have delayed completion of the 303-mile, 2 million Dth/d Appalachia-to-Southeast pipeline.

Without new pipeline capacity, production from nearby Appalachia remains stunted and prices in downstream markets remain at a premium. On the flip side, local market prices are weighed down, particularly during low-demand periods, as production gets trapped in the basin.

Indeed, Eastern Gas South prices sit at a more than $1.00 discount to Henry Hub for the remainder of summer, according to Forward Look. The winter strip isn’t faring much better, sitting nearly 90.0 cents back of the benchmark as of Wednesday.

“It is difficult to craft a compelling case for material improvement in that curve without either production declining, which we don’t expect, or additional infrastructure, which is uncertain at best,” Aegis said.

The lack of production growth has more far-reaching implications as well.

Hampered by a cold winter and springtime maintenance, Lower 48 production has failed to capture highs reached in late 2021. The persistently sluggish pace of growth has occurred as demand has shown no signs of slowing.

On the cusp of sweltering summer temperatures and rising cooling demand, U.S. storage inventories are concerningly low. The market got a glimpse of the toll hot weather can take on supply when the latest government storage data was released. The Energy Information Administration (EIA)’s Thursday report covered the week ending May 20, when extreme heat in Texas and the Southeast, along with a flash heat wave across the Mid-Atlantic and Northeast, sent air-conditioning demand soaring.

The result: a paltry 80 Bcf injection into storage inventories. Ahead of the EIA’s weekly inventory report, major polls showed median estimates hovering around an injection of 90 Bcf. Estimates ranged widely from a build of 76 Bcf to as high as 103 Bcf.

The 80 Bcf increase in storage compares with the 109 Bcf injection recorded in the same week a year earlier and the five-year average build of 97 Bcf, according to EIA.

The South Central region – which had recorded stout stock gains in recent weeks – saw inventories rise by only 16 Bcf last week, according to EIA. This included a 15 Bcf build in nonsalt facilities, with salts staying flat on the week. EIA noted that totals may not equal the sum of components because of independent rounding.

The East led with a 29 Bcf increase in stocks, and the Midwest reported a 27 Bcf increase, the agency said. The Mountain region picked up only 6 Bcf, while the Pacific picked up 3 Bcf.

Bespoke Weather Services said the EIA’s 80 Bcf injection figure confirmed that supply/demand balances are “indeed quite tight.” The firm is concerned that the market may be pinning its hopes on a high figure in next week’s EIA report as well, given the data.

Although Bespoke does not expect the actual injection to be quite as tight as Thursday’s 80 Bcf build, it still points to “precariously low end-of-season storage levels if the market cannot make, and sustain, significant gains in production over the next several weeks.” The chances of this occurring would be amplified if there is a return to a hotter weather pattern moving into the core of the summer season.

Models on Thursday kept the 15-day outlook near normal for this time of the year. However, Bespoke said it still expects to see stronger heat show up heading into the month of June, “but we are not there as of right now.”

Part of the reason, according to the forecaster, is a projected blocking pattern that is allowing a cooler trough to dive through the eastern United States. Later in summer, though, a blocking pattern turns more bullish via enhancing heat across the South. It’s just a little early in the season for that kind of an effect right now.

“In short, while we do expect the La Niña base state to send the pattern back hotter down the road, the next couple of weeks looks best characterized as variable in all key regions of the nation,” Bespoke said.

Up, Down And Everything In Between

EBW, meanwhile, said once spring maintenance wraps, a rebound in production is likely. Though this may not result in significant downside for prices, there are other bearish risks.

That said, there are risks to the upside as well. Liquefied natural gas (LNG) demand already has started to ramp back up from seasonal turnarounds, adding heft to the demand picture. NGI data showed feed gas deliveries to U.S. terminals edging up to 13.3 Bcf on Thursday, up only slightly day/day but up from around 11.9 Bcf earlier in the week.

EBW noted that the correlation between Nymex futures and Dutch Title Transfer Facility (TTF) futures may increase later this year. European natural gas prices are a liquid benchmark for global prices that represent a theoretical bullish ceiling for Nymex futures.

“If European gas storage continues to rise rapidly and TTF futures were to stumble from $29 towards $20, the falling theoretical price ceiling where U.S. LNG exports could be shut-in may lead to softening bullish pressures for Nymex futures,” EBW said.

However, a still-tightening natural gas storage trajectory should not be ruled out. Current spreads may result in marketers responding to price signals by withdrawing a larger-than-normal amount from storage to meet prompt demand this summer.

“Should this occur, it could exacerbate storage trajectory concerns and ignite another leg higher for Nymex winter futures,” EBW said.

The June Nymex gas futures contract expired 6.3 cents lower day/day at $8.908 on Thursday. The July contract, meanwhile, settled down 16.8 cents Friday at $8.727 on its first day in the prompt-month position.