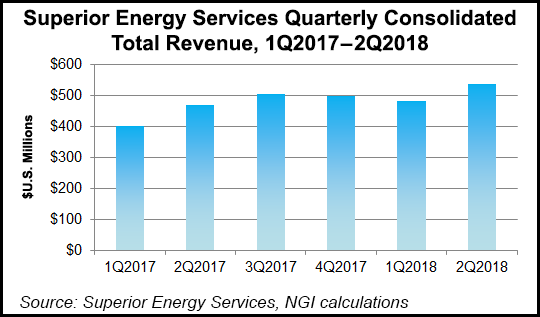 Gulf of Mexico (GOM) activity remained “relatively unchanged” from April through June as stronger drill pipe demand was offset by less workover activity. In addition, some of the company’s expected completion tools work was moved to the third quarter, Dunlap said. Overseas, however, there were improved results, driven by “much stronger” hydraulic workover activity and increased drill pipe demand.

“Our strategy of allocating capital toward pressure pumping and our cornerstone global franchises during the downturn has us on solid footing as we work to improve returns, increase our cash balances and reduce debt levels as the cycle progresses,” the CEO said.

Superior’s onshore completion and workover services segment reported an 11% gain in revenue from a year ago and an 18% increase sequentially to $276.2 million.

Overall, the production services segment’s revenue climbed 15% y/y and 1% from the first quarter to $102 million.

In the technical solutions segment, Superior’s revenue in 2Q2018 was flat y/y and down 2% to $63.3 million. U.S. land revenue increased 16% sequentially to $7.9 million. GOM revenue, meanwhile, fell 6% from the first quarter to $35.3 million from the shift of completion tool activity to the third quarter. International revenue decreased 2% on lower levels of well control activity.