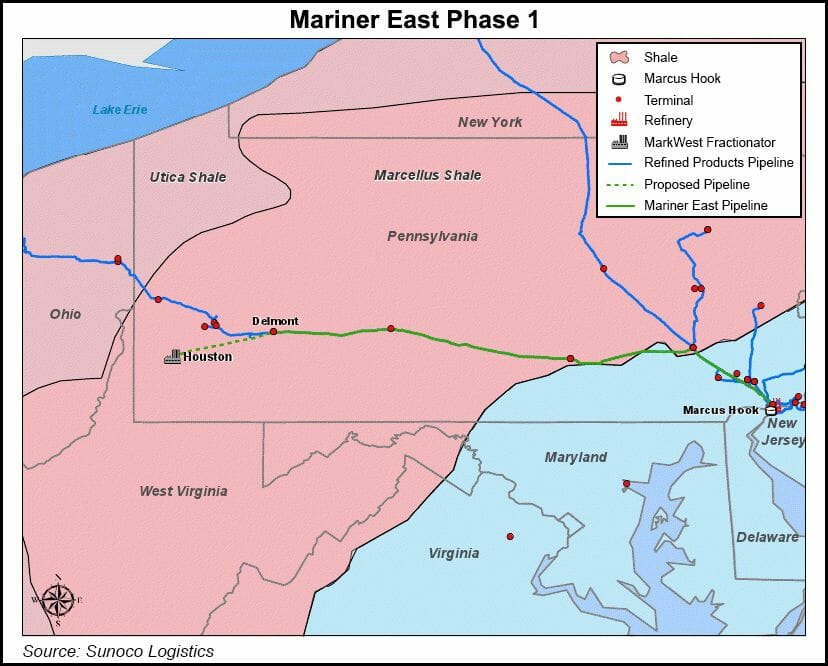 “To complete Mariner East, the company states that it must abandon intrastate service on a portion of its existing system and repurpose the affected facilities for interstate propane and ethane service,” the PUC said in its order approving Sunoco’s request. “The company proposes to abandon intrastate transportation of refined petroleum products on certain segments of the pipeline that lie west of Montello, which also necessitates abandonment of intrastate shipments that originate at Twin Oaks or Point Breeze and flow to delivery points west of Montello.” The abandonment would result in “minimal, if any, customer effects,” according to Sunoco.

The PUC also approved temporary service interruption, which Sunoco said will be required during construction of Mariner East, from Point Breeze to Mechanicsburg and from Twin Oaks to Exton, Fullerton, Macungie, Montello, Mechanicsburg, Tamaqua, Williamsport and Kingston.

Last year, Range Resources Corp. signed a 15-year agreement with Sunoco to anchor the Mariner East pipeline project, which includes processing and export facilities to connect natural gas liquids (NGL) in southwest Pennsylvania to Sunoco’s port at its Marcus Hook facility near Philadelphia (seeNGI, Oct. 1, 2012). Range would have firm transport capacity of 40,000 b/d (20,000 b/d of ethane and 20,000 b/d of propane). Once transported to Marcus Hook, the ethane and propane will be fractionated into purity ethane and propane for delivery to domestic and international customers.

Overall, Mariner East is subscribed to transport 65,000 b/d of ethane and propane from the MarkWest Energy Partners LP processing facilities at Houston, PA, outside of Pittsburgh, to Marcus Hook. MarkWest itself holds capacity on the project. Propane deliveries are expected to begin in the second half of 2014. Ethane deliveries are expected to start in the first half of 2015 after additional facilities are constructed at Marcus Hook. In the interim, MarkWest is transporting on behalf of Range a portion of its propane sourced from its Houston processing and fractionation complex to the Marcus Hook facilities by rail for sale to domestic and international customers.

The opening of the Sunoco’s Mariner West I ethane pipeline and new processing plants should provide some relief to current wet gas constraints in the Marcellus and Utica shales, and the plays should be largely de-bottlenecked by the end of next year, analysts at Barclays said recently (seeNGI, July 29). Ethane-related constraints could persist until the start of the Mariner West II and Enterprise Products Partners LP’s planned Appalachia to Texas Express ethane pipeline next year, they said.