A Summit Midstream Partners LP subsidiary has closed financing for the Permian Basin natural gas Double E Pipeline project, which is expected to be in service and under budget by the end of the year. 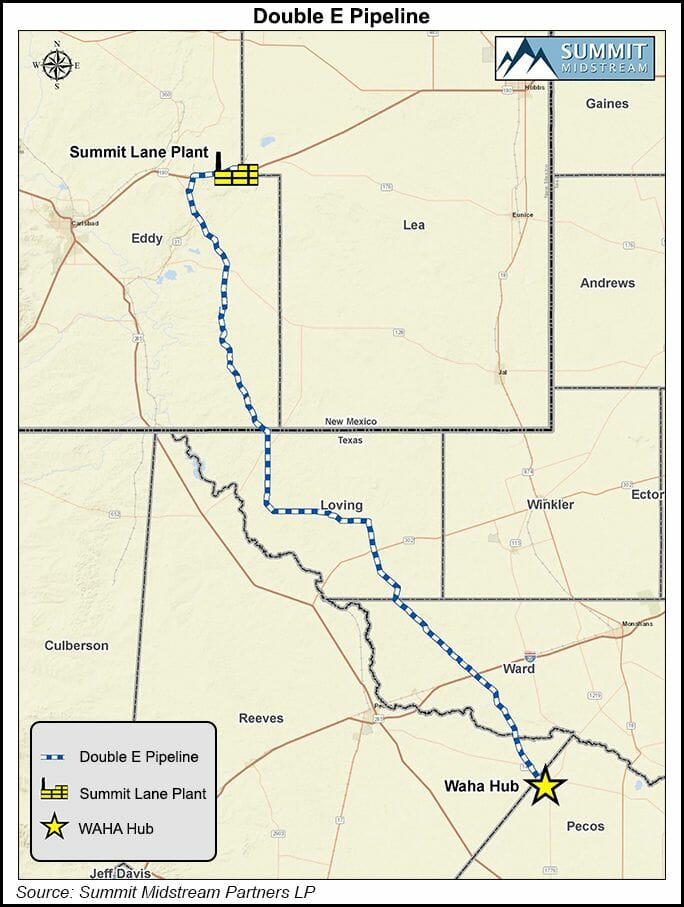 Summit Permian Transmission LLC closed on $175 million of senior secured credit facilities for Double E’s development. Summit owns a 70% interest in the project, which would transport 1.35 Bcf/d from the Permian Delaware sub-basin to the Waha Hub in West Texas and beyond. The project was sanctioned in June 2019.

Summit management expects Double E to be completed at or below the current $425 million capital budget, with about $35 million remaining in unidentified project contingency. The original price tag was around $500 million. Summit also has posted a $16 million letter of credit to support back-end equity contributions if needed. Any additional equity required is not expected to fund until 2022, following the in-service date of Double E later this year.

“This was a very important achievement for Summit because it allows us to advance a web project without utilizing additional cash” from the partnership’s balance sheet, “which thereby creates more financial flexibility and a clear path to continue enhancing the balance sheet in the near term,” Summit CEO Heath Deneke said last week on the fourth quarter 2020 earnings call.

Double E would provide not only a “cost-effective gas transportation solution for our customers,” but also offers access to downstream markets and could benefit local communities, according to Deneke. “It will also help improve the environment by reducing the need for flaring in both Texas and New Mexico.”

ExxonMobil is an anchor shipper and has a 30% stake in Double E. It is the second joint venture between Summit and the supermajor. ExxonMobil’s XTO Energy Inc. and Summit teamed up in 2017 to develop and operate an associated gas gathering and processing system to serve Permian operators in New Mexico.

Though oil prices have strengthened considerably in the first two months of 2021, activity in the Permian is expected to slow this year, according to CFO Marc Stratton. Summit reported a nearly 3% sequential decline in volume throughput on its Permian systems in 4Q2020 and said its customers currently have only two drilled but uncompleted (DUC) wells behind the system, which management expects to be turned in line by the end of March.

“These wells represent the only new well connections in the segment in 2021,” Stratton said.

However, the executive expects one of Summit’s customers to continue delivering 10 MMcf/d of throughput in 2021, which should partially offset natural production declines.

“There is upside potential for increased activity in our Permian segment if crude oil prices rise, although the latest feedback suggests that 2021 activities are most likely to be focused outside of our service area,” he said.

Elsewhere across the Lower 48, Summit expects to see 17 well connections in legacy areas in the Piceance Basin and the Barnett and Marcellus shales this year. The Barnett is expected to see eight wells connected to Summit’s midstream systems, which would be the first time since 3Q2019 that a new well is connected.

Nine DUCs are expected to be connected to the company’s Marcellus systems in the first half of the year, according to Stratton. The “volume growth in these systems,” he said, should provide cash flow and be a “meaningful catalyst” to an existing base of mature production.

Summit’s customers also have six DUCs behind the liquids midstream system in the Williston Basin, and another two behind its gas system. “While we expect a limited number of Williston wells connections in 2021, we do think there’s an opportunity for increased activity if crude oil prices continue to rise throughout the year,” Stratton said.

Summit reported that liquids volumes in the Williston increased by 2.9% sequentially in 4Q2020 to 71,000 b/d, primarily because of eight new wells that were turned in line, which were the first new wells connected since 1Q2020.

And although customers have 20 DUCs behind Summit’s Denver-Julesburg (DJ) Basin system, none are expected to be completed in the near term. The company also does not expect any new well connections on the DJ system for the full year because of what Stratton said were “special situations” for two customers.

One of those customers, he said, is in the process of being acquired by another DJ-focused company. “They publicly disclosed that they expect to focus their development opportunities on acreage outside of our service area in 2021.”

Summit’s other large DJ customer plans to focus 2021 development activities to acreage on federal lands and away from acreage contiguous to its service area.

“While it’s too early to make predictions beyond 2021, preliminary customer conversations indicate that 2021 may be an anomaly, and we expect new upstream activity behind our DJ system will return in 2022,” Stratton said.

Total growth capital expenditures (capex) are expected to be $10-25 million, which includes about $10 million for maintenance capex. Deneke said the majority of growth capital would go toward accommodating “near-term volume growth in the Utica segment as a result of an incentive agreement that we put in place with a customer last year.”