Summit Natural gas of Maine has made the final connection for its 68-mile steel backbone natural gas transmission pipeline between Pittston, ME, and Madison, ME, a key step in the company’s plans to distribute gas to 17 communities in central Maine. 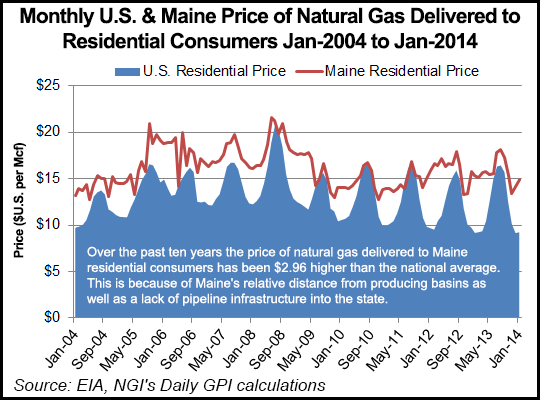 The transmission pipeline took less than a year to build and completes the first year of Summit’s multi-year Kennebec Valley project. Summit plans to install 85 miles of distribution pipeline in the Kennebec Valley area this year and another 66 miles in the towns of Cumberland, Falmouth and Yarmouth. Summit announced plans last year to go forward with a $110 million expansion that will extend natural gas service to those towns, all near Portland, ME, in the southern part of the state (see Daily GPI, Nov. 26, 2013).

“As we begin our 2014 construction program, we are committed to expanding natural gas service to the residential and commercial sectors,” said Mike Minkos, president of Summit Natural Gas of Maine. “We want as many people as possible to experience the positive economic and environmental benefits of natural gas.”

Summit’s expansion plan also calls for a phase 2 build-out of its $350 million Kennebec Valley transmission and distribution project. The Maine Public Utilities Commission approved that project in January (see Daily GPI, Jan. 14, 2013). At the time, Summit said the lines would serve 15,000 residential and industrial customers in 17 municipalities by the third year of operations.

With the first phase completed, Summit said more than 1,800 residential customers are connected to its natural gas pipeline in Augusta, Fairfield, Gardiner, Hallowell, Randolph and Waterville. More than 500 commercial customers, including UPM Madison and the city of Augusta have also signed contracts for gas service, the company said.

“With great anticipation, we look forward to utilizing natural gas in our papermaking power boilers,” said Russ Drechsel, president of UPM Madison. “Switching to natural gas will have several immediate positive impacts on our business, including reducing our environmental footprint. The entire community will benefit from the local delivery of natural gas.”

Phase 2 of the Kennebec Valley project, which is scheduled to begin this month, will focus on installing natural gas distribution and service lines in several communities.

Maine Gov. Paul LePage has urged legislators to tackle the state’s energy challenges, with an emphasis on lowering residential heating bills, and natural gas, which has found Maine a hard market to crack (see Daily GPI, Jan. 21). Wholesale electricity prices in New England were up 57% in 2013 compared to 2012; the price of propane has jumped 22% since the heating season began in October; and the 70% of Maine households that use heating oil can expect to spend $3,200 on that fuel this winter, according to LePage.

In 2013, LePage joined with five other New England governors in committing to work together with the Independent System Operator of New England to advance an energy infrastructure initiative that diversifies the region’s energy supply portfolio while ensuring that the benefits and costs of transmission and pipeline investments “are shared appropriately” (see Daily GPI, Dec. 6, 2013).

Maine last year adopted an omnibus energy bill (LD 1442) that would increase the state’s gas pipeline capacity. The bill, which was adopted by both the Maine House and Senate, was vetoed by LePage, but legislators overruled that veto.

The first natural gas pipeline ever to reach the state’s capital, which runs from the Maritimes and Northeast pipeline tap in Windsor, ME, was completed by MNG just last October (see Daily GPI, Oct. 25, 2013).