The Northeast and MidAtlantic can expect summer warmth to linger into fall, and the Southeast will remain vulnerable to tropical weather, according to AccuWeather. 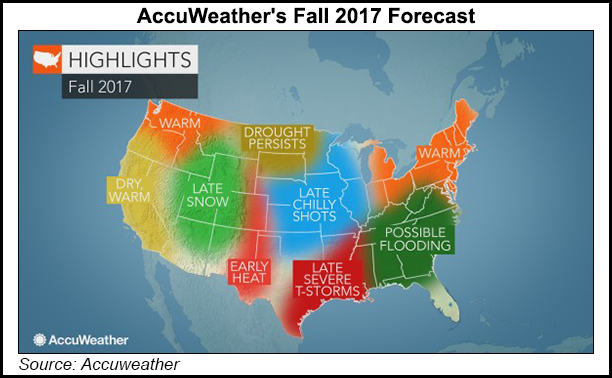 Autumn temperatures across the Northeast and MidAtlantic aren’t necessarily going to be exceptionally warm, but they are expected to run above normal, said AccuWeather meteorologist Paul Pastelok. Rainfall could help hold back extreme heat, and late season severe weather is expected to kick in from Albany, NY toward Manhattan and northern New Jersey.

Though the Southeast has an easy start to the hurricane season, a few tropical hits may threaten to spoil the first half of fall.

“We think that the areas that are more vulnerable this year are still the Gulf Coast and along the Carolina coast,” Pastelok said.

The National Oceanic and Atmospheric Administration’s Climate Prediction Center in a forecast issued prior to June 1, the start of the 2017 Atlantic hurricane season, said it expected above-normal activity, with 11-17 named storms, five to nine of them becoming hurricanes, include two to four major hurricanes (Category 3 or higher).

In an extended range forecast released in April, scientists at Colorado State University said they expected slightly below-average activity in the Atlantic Basin this year, with 11 named storms, of which four are expected to become hurricanes, including two major hurricanes.

And AccuWeather meteorologists previously said they expect 10 named storms in the Atlantic this year, of which five could become hurricanes, including three major hurricanes.

So far, despite the presaging of Tropical Storm Arlene, a rare pre-season storm that formed in April, the Atlantic hurricane season has been a relatively quiet one. In June, Tropical Storm Cindy made some noise in the Gulf of Mexico (GOM), prompting the temporary evacuation of dozens of production platforms and shutting in more than 15% of GOM oil production.

A combination of fewer tropical storms and a lessening reliance on GOM oil and natural gas production (thanks to the growth in production from inland shale plays) has kept hurricane-related damage to the nation’s energy infrastructure and markets to a minimum in recent years.

GOM natural gas production today represents only a fraction (5%) of total U.S. output, compared to around 20% in 2005, as most of the vast US. supplies now reside onshore thanks to the unconventional drilling revolution.

Pastelok said severe weather will threaten the southern Plains and lower Mississippi Valley this fall as temperatures run above normal in the GOM.

“If you get any of these mid- to late-season storms coming down in the northern Plains like we’re expecting, you’re going to get a clash of air masses [in the southern Plains],” he said. That clash could cause severe weather to erupt, with the threat for tornado outbreaks from Texas to Tennessee.

Wildfires, which have already caused problems this summer from British Columbia to California and Colorado, are likely to linger into the fall from southwestern Montana toward California as drier conditions and continued warmth dominate the western forecast, AccuWeather said.