Big basis moves in Appalachia and on the West Coast highlighted natural gas forwards trading during the June 3-9 period, while a sufficiently hot forecast helped propel a broader move higher for the Lower 48 overall, according to NGI’s Forward Look. 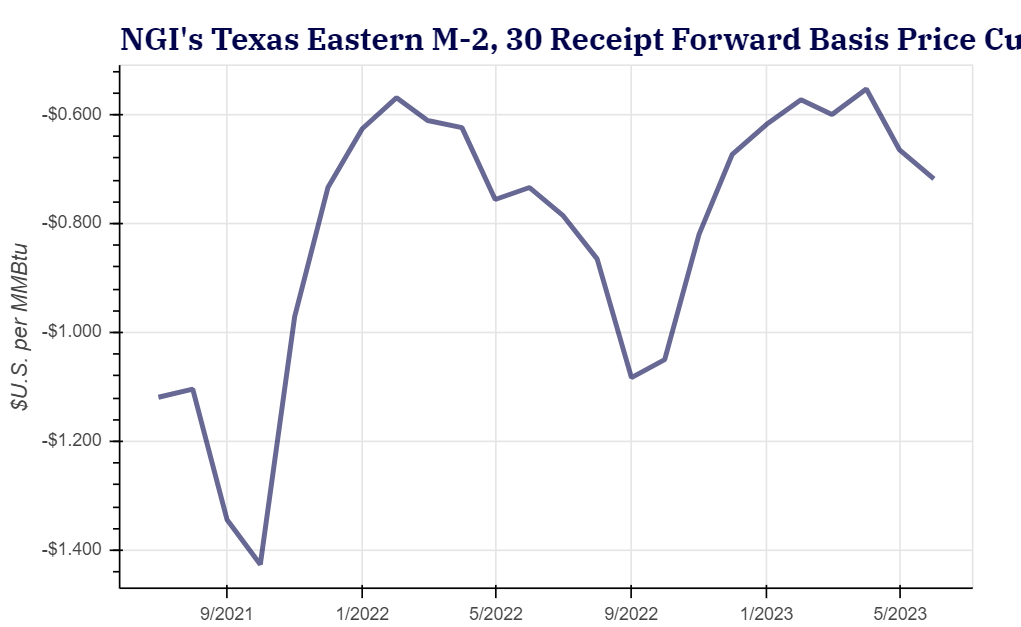 Fixed prices for July delivery were higher week/week by around 10-15 cents at numerous locations, with benchmark Henry Hub gaining 8.8 cents to average $3.130/MMBtu.

The potential for a pressure reduction on the Texas Eastern Transmission Co. (Tetco) system to remain in place for much longer weighed on the Nymex futures markets throughout the week.

Late Thursday, Tetco offered a little more clarity, though not exactly the resolution the market had hoped for. The pipeline indicated that the pressure reduction ordered by the Pipeline and Hazardous Materials Administration (aka PHMSA) could last until late in the third quarter.

Analysts at EBW Analytics Group described the Tetco notice as “big news,” noting that the operator revealed “that the reduction in pressure in its 30-inch pipeline was triggered by an anomaly that had been identified during an in-pipe inspection. While the full scope of the anomaly has not been determined, Tetco stated that full service is likely to resume in late 3Q2021 at the earliest.”

“While some of the affected gas is likely to be re-routed, flows from Appalachia to the South could be reduced for months,” the EBW analysts said. “It is also possible that sections of the pipeline will need to be shut down while the anomaly is being corrected, further magnifying the impact on gas prices.”

Energy Aspects in a recent note said rerouting options for Northeast-to-Gulf Coast volumes implied “minimal impact to production” from the Tetco constraints. However, maintaining 0.9-1.0 Bcf/d of capacity between the Tetco M-2 and M-1 zones, compared to 2.1 Bcf/d design capacity, will be “critical to prevent any future production curtailments.”

This presents “a real risk of Appalachia production curtailments this month if M-2 to M-1 capacity falls below this critical level,” Energy Aspects said.

Meanwhile, the July Nymex gas futures contract surged to an intraday high of $3.300 before settling Friday just shy of that at $3.296, up 14.7 cents from Thursday’s close.

The Schork Group noted that the 2 Bcf build was the 15th straight injection and expanded the year/year deficit by 39 basis points to 55 Bcf, or 15.4% below year-ago levels. Refills are running 73 Bcf above the five-year average, 58 Bcf above the seasonally adjusted time series and 24 Bcf above last year’s Covid-19-addled pace.

The firm said it’s important to keep in mind that in the weeks ahead, the market will be entering the “wimpy phase, when utilities begin to borrow their storage to sate demand for cooling Btus through the dog days of summer.”

This comes as U.S.-to-Mexico pipeline gas exports have averaged 6.4 Bcf/d summer-to-date, with room to grow, according to a recent estimate from Wood Mackenzie.

“An all-time high for the hot season, this volume represents a 1.7 Bcf/d rebound from the same period last year,” analyst Ricardo Falcon Bautista said. “The first few days of June are already crossing the 7 Bcf/d line, driven by strong boosts in Mexico-bound flows from all U.S. complexes.”

The firm was modeling a 6.8 Bcf/d average for pipeline exports to Mexico this summer, with flows expected to peak in August at more than 7 Bcf/d, the analyst said.

As for the liquefied natural gas (LNG) exports picture, the recent strength at Henry Hub has coincided with strength at the TTF benchmark (aka Dutch Title Transfer Facility) in Europe, according to Energy Aspects.

“We now expect smaller year/year increments in Europe’s LNG receipts over the rest of the injection cycle — although U.S. exports will be running at maximum capacity — making it even harder for the continent to reach storage adequacy by end-October, leading us to believe that more gas must be priced out of the European power market than is currently reflected on the curve,” the firm said.

Energy Aspects said it has “no room for upward adjustment” to its expectation for U.S. LNG export capacity utilization of 95% for the injection season, but a constructive global LNG demand outlook “does suggest that U.S. exporters will continue to load cargoes quickly and efficiently and minimize downtime.”

Looking at the latest forecast outlook Thursday, Bespoke Weather Services noted a small adjustment in the hotter direction for next week’s temperatures.

“We continue to see the best heat versus normal moving back to the Plains westward, but with a lack of actual cooler air anywhere. Despite an eastern U.S. trough moving through next week, the pattern on the national level remains biased to the hotter side,” Bespoke said. “…We continue to see signs that some heat returns to the eastern U.S. in the final third of the month, keeping us on pace for a top-five hottest June on record” in terms of national gas-weighted degree days, “with a shot at the top spot if late-month heat is strong enough.”

Meanwhile, Maxar’s Weather Desk as of Thursday continued to project hotter-than-normal temperatures for the western half of the Lower 48 for the 11- to 15-day period, from June 20-24. The forecaster also noted hotter trends in the West in the six- to 10-day period, from Tuesday through June 19.

“Several days are expected to challenge daily records” in the region, Maxar said. “Among the notables are Denver in the upper 90s through mid-period, Salt Lake City at 100 degrees-plus from days five through nine, Las Vegas and Phoenix peaking in the mid-110s from early to mid-period and Sacramento in the mid-100s on day eight.”

The sweltering forecast helped send forwards higher out West during the June 3-9 trading period, especially at California hubs already trading at a substantial markup. PG&E Citygate basis for July surged 14 cents higher to reach $1.356. To the south, SoCal Citygate basis tacked on another 80.7 cents to swell to $3.794.