Natural gas forwards markets for September trading were mostly quiet since last week, showing only small changes of less than one cent on average. As with every rule, however, there are some exceptions. 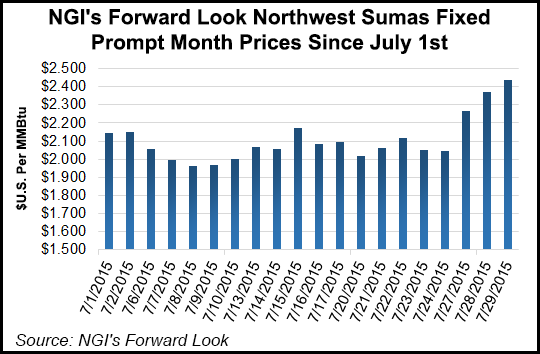 The only real surprise was at Northwest Sumas, where September basis leapt almost 32 cents from negative $0.884 to negative $0.566. Lately, Sumas has remained weak despite some unusually hot weather in the region, which has led to record demand amid low hydropower output.

One possible reason for the earlier weakness is the return of supplies to the market as Spectra Energy’s McMahon plant returns to service, making more gas available to flow down to the region from British Columbia.

This weakness was highlighted by NGI’s Forward Look at the beginning of July. At the time it was noted that the price declines at Sumas came despite unusually high temperatures and record demand in the region, a trend that is likely to continue the rest of the month, according to analysts at industry consultant Genscape (see Forward Look, July 2). With low hydro levels, it was only a matter of time until gas filled the power generation void, resulting in a bump in gas prices.

“It seems that Sumas pricing is starting to reflect these factors,” said NGI markets analyst Nathan Harrison. “Looking at Sumas’ prompt month fixed prices, one can see that just this week things have started to improve quite a bit.”

Lower electricity output from wind and hydroelectric sources has meant an increased reliance on natural gas-fired generation in the Pacific Northwest as evidenced by the 2Q2015 results of Portland General Electric (PGE) released on Tuesday (see Daily GPI, July 28).

It was the warmest June ever and third-warmest second quarter ever in the PGE service territory, and overall annual customer growth has increased to 1.5% as the Portland and Oregon economies rebound. Natural gas accounted for 20% of PGE’s power mix in 2Q2015, according to CEO Jim Piro.

For the first six months of the year, wind power was off by 30% and hydroelectric supplies were below normal, but Piro said “strong system reliability and power supply management” offset those negative impacts.

Gas-fired generation is on track to get a boost next year when PGE’s $450 million, 440 MW Carty Generating Station opens as expected in the second quarter. Construction is proceeding on budget, Piro said during a conference call in which he reported that 2Q2015 earnings were flat compared to 2Q2014. In 2Q2014, gas (1%) and coal (8%) combined accounted for less than 10% of PGE’s power supplies, while wind (9%) and hydro (9%) contributed nearly 20%. In 2Q2015, natural gas (20%) and coal (35%) contributed more than one-third of the power.

There was also a big drop in purchased power (73% to 49%) quarter over quarter, and a lot of those supplies also can come from gas-fired generators.