Oil and natural gas market conditions heading into September are not trending in an optimistic direction for the U.S. industry, with the continued presence of Covid-19 cases casting a pall over energy demand, according to Haynes and Boone LLP. 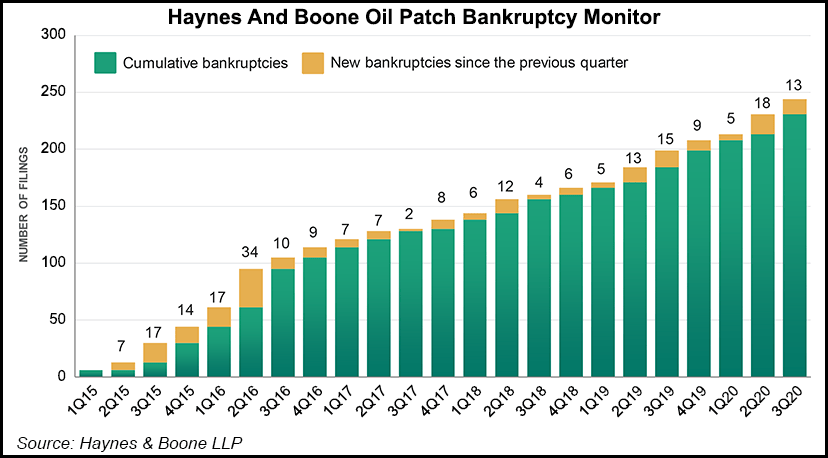 In an updated Oil Patch Bankruptcy Monitor report published Monday, the Dallas-based law firm said the pandemic continues to contribute to a “collective gloom” that prices and industry activity will not turn the corner anytime soon.

Furthermore, without any near-term hope for improving economic conditions for U.S. exploration and production (E&P) companies, it is reasonable to expect that a “substantial” number would continue to seek protection from creditors before this year is over.

Haynes and Boone has monitored North American E&P bankruptcies since 2015.

“Until full economic activity returns and consumer confidence that the worst of the pandemic is behind us, demand levels will remain depressed,” the authors said.

In July and August, an estimated 13 E&Ps filed for bankruptcy protection, which, combined with the other filings to date this year, represents a 62% increase from the same period a year ago,  according to Haynes and Boone.

The law firm noted that the total secured debt involved in 2020 producer bankruptcies to date already exceeds the total amount of secured debt for all E&P filings in 2016. In 2016, the producers had a much higher level of unsecured debt than what has been reported in 2020, the firm said.

“As a direct result of this shift, more secured lenders’ claims are impaired this year than was the case four years ago,” Haynes and Boone said. “This disappearing ‘unsecured debt cushion’ that existed earlier in this cycle, including 2016, and served as a heat shield to protect secured lenders, has been burned away by the continued pressure of low commodity prices due to oversupply and shrinking demand.”

Over the entire five-year period as of Aug. 31, 244 producers had filed for bankruptcy since the Oil Patch Bankruptcy Monitor began tabulating E&P filings. These have involved more than $172 billion in aggregate debt with more than $50 billion so far in 2020.

Most of those bankruptcy filings have occurred in Texas, with an estimated 118 filings. Delaware, with 37, and Colorado, with 12, round out the top three states in reported filings. Several states, including Nevada, New Mexico and West Virginia, reported only one bankruptcy filing each in the past five years, according to the research.

Meanwhile, independent producer Lonestar Resources US Inc. has become one of the latest E&Ps to reorganize under Chapter 11. The Fort Worth, TX-based operator, whose activity is concentrated in the Eagle Ford Shale, plans to eliminate around $390 million in debt. About $250 million of the senior notes due in 2023 would be converted to equity.

Lonestar expects to be able to meet its financial commitments and continue to operate its business as usual throughout the restructuring period.

“We have carefully considered our options in the unprecedented environment faced by the energy industry and concluded that a consensual restructuring is in the best interest of the company,” said CEO Frank D. Bracken III. “In combination with our efforts to meaningfully reduce our capital and operating costs, the significant reduction in leverage that this transaction will afford the company will position Lonestar to be highly competitive going forward.”