The Barnett Shale’s natural gas production potential is “slowly declining;” however, total resource recovery from the granddaddy of shale plays is expected to be three times what has been produced to date, according to research conducted by the Bureau of Economic Geology (BEG) at The University of Texas at Austin and funded by the Alfred P. Sloan Foundation. 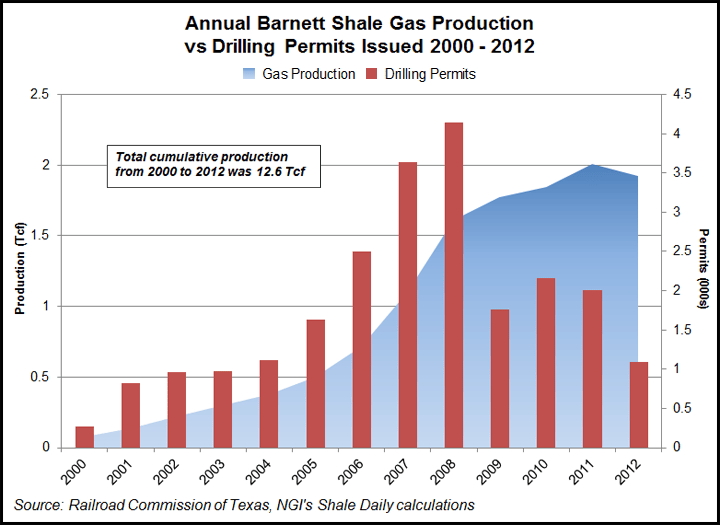 The findings, currently under peer review, are to be released in five separate manuscripts over the coming months. BEG said the research is “believed to be the most thorough assessment yet” of the Barnett’s potential.

Barnett production will slowly decline through 2030 and beyond, researchers said. “This forecast has broad implications for the future of U.S energy production and policy,” BEG said.

The study “integrates engineering, geology and economics in a numerical model that allows for scenario testing based on many input parameters. In the base case, the study forecasts a cumulative 44 Tcf of recoverable reserves from the Barnett, with annual production declining in a predictable curve from the current peak of 2 Tcf per year to about 900 Bcf per year by 2030.”

Total cumulative production from the Barnett Shale from 2000 to 2012 was 12.6 Tcf, according to the Railroad Commission of Texas (RRC) and NGI’s Shale Daily calculations. Natural gas production in the Barnett was 1.92 Tcf in 2012, down from 2.01 Tcf in 2011, which represented the play’s first year-to-year decline.

The BEG outlook lies between optimistic and pessimistic projections of others that have looked at the Barnett’s potential. It “suggests that the formation will continue to be a major contributor to U.S. natural gas production through 2030,” said BEG, which expects to complete similar studies of three other major U.S. shale gas basins (the Haynesville, Fayetteville and Marcellus) by the end of this year. Then the plan is to move on to shale oil basins next year, either beginning with the Bakken or the Eagle Ford.

“It showed what happened in the field as people pulled back from marginal areas into better areas but continued to drill. And so they were drilling fewer wells, but they were better wells, and therefore production in the whole field, unlike some forecasters thought, did not fall,” Tinker said. “[Producers] were making better, more economic wells. So we were able to investigate A.) that that happened, and B.) were there more locations to be drilled in better areas. And, in fact, yes there were, and we feel there still are.”

In the Barnett, the best wells drain about half of the gas residing in the area they target. The worst wells get less than 15%, Tinker said. “The whole field, in our base case, will produce about 44 Tcf; that’s about 10% of all the gas in place in the area that we studied,” he said. “So most of that is in rocks that won’t be productive at any price, but it does show that there’s going to be a lot of natural gas left there even after pretty heavy drilling in most of the good areas. You don’t get it all.”

Other organizations that have examined the potential of the Barnett include the Energy Information Administration, the Potential Gas Committee, the U.S. Geological Survey, the Massachusetts Institute of Technology and Rice University in Houston. “I know the people at all those places, and I think they would point to this [research] as, A.) different, and B.) more rigorous just because we had the time to do it that way.

“It’s not a criticism of what’s been done [by others]. It just took a dozen people a year and a half. It’s a lot of work.”

In the Barnett, BEG looked at actual production data from more than 16,000 individual wells drilled in the play through mid-2011. Other assessments of the Barnett have relied on aggregate views of average production, offering a “top-down” view of production, said Scott Tinker, director of BEG and co-principal investigator for the study.

The BEG study takes a “bottom-up” approach, starting with the production history of every well and then determining what areas remain to be drilled, BEG said. “The result is a more accurate and comprehensive view of the basin. The BEG team enhanced the view by identifying and assessing the potential in 10 production quality tiers and then using those tiers to more accurately forecast future production. The economic feasibility of production varies tremendously across the basin depending upon production quality tier.”

The model used for the study uses a base case that assumes average natural gas prices of $4/Mcf. But it allows for variations in price, volume drained by each well, economic limits of a well, technological advances, gas plant processing incentives and other factors that influence ultimate well economics, BEG said.

“We have created a very dynamic and granular model that accounts for the key geologic, engineering and economic parameters, and this adds significant rigor to the forecasts,” said Svetlana Ikonnikova, an energy economist at BEG and co-principal investigator of the project.

Whereas thickness and porosity affect reserves greatly, price is a dominant factor affecting production, BEG said. While the research model shows the correlation between price and production, it suggests that price sensitivity is not overly dramatic, at least in the early phase of a formation’s development. This is because there are still many locations to drill in the better rock, said Tinker, which is cost effective even at lower prices.

The data in the BEG model stopped at the end of 2010, after about 15,000 wells were drilled in the field. In the base case, the assessment forecasts another 13,000 wells will be drilled through 2030. In 2011 and 2012, more than 2,900 wells were actually drilled, in line with the forecast, leaving just over 10,000 wells remaining to be drilled through 2030 in the base case. Wells range widely in their ultimate recovery of natural gas, a factor the study takes into account.

A new method of estimating production for each well, based on the physics of the system, was integral to the project and should offer a more accurate method of forecasting production declines in shale gas wells, BEG said. This method, along with several other components in the work flow, has been submitted in several manuscripts to peer-reviewed journals.

The papers have undergone a form of professional peer review built into the BEG research process. Before submitting the papers to journals, the BEG team invited an independent review panel with members from government, industry and academia to critique their research. At an open day for academics and industry scientists, 100 attendees were invited to offer additional feedback. Scientists and engineers from two of the larger producers in the Barnett — Devon Energy Corp. and ExxonMobil Corp. — offered feedback on the methodology during two in-house corporate review days. BEG also hired a private consulting firm to individually critique the draft manuscripts and offer suggestions for improvement.

“Overall, the rigorous assessment of the country’s second most productive shale gas formation reaffirms the transformative, long-term impact of shale and other unconventional reservoirs of oil and gas on U.S. energy markets,” BEG said.