Natural gas forward market trading was choppy at the front of the curve for the trading period ending July 28. Heat was forecast to ease in the near term, dragging down summer prices by more than 20 cents in the Northeast, according to NGI’s Forward Look. 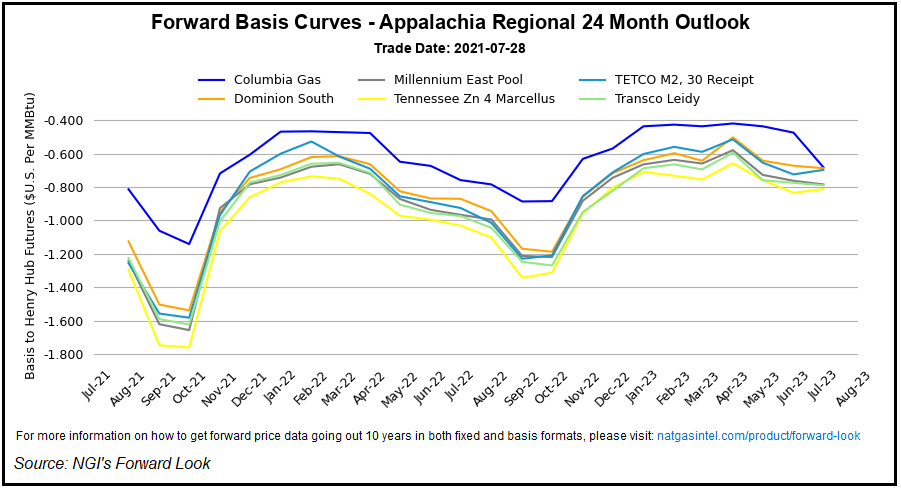 Other markets continued to see small gains through the balance of summer (August-October) on the prospects for hotter weather returning by the middle of August. Any increased cooling demand was seen further threatening storage levels ahead of the winter.

South Central storage inventories, in particular, appeared to be at less-than-ideal levels at this point in the injection season, which ends Oct. 31. The region has been withdrawing gas from storage in recent weeks as robust cooling demand has combined with strong export demand, both via pipeline and shipments of liquefied natural gas (LNG).

Market observers on The Desk’s online energy chat Enelyst said they expect to see another steep draw next week, as recent temperatures across Texas have been around 100 degrees, with little wind generation to help meet what is expected to be strong power demand.

“We saw the largest draws on the summer this past week from salt,” said one Enelyst participant.

For example, LNG exports now make up about 10% of the gas market. Consumption of the super-chilled fuel is high, given low storage inventories in Asia and Europe, not to mention intense heat in some regions as well.

“Just from a balance perspective, GWDDs versus injections, we are still closest to 2016 and 2017, but obviously much is different now, namely LNG,” Lovern said during the Enelyst chat. “And 2017 gained a ton of production from now to the end of the year.”

For now, Bespoke said “production simply cannot get away from the 91 to 92 Bcf range, which is not enough to loosen supply/demand balances enough to alleviate concerns about low storage heading into winter, given the level of exports and power burns.”

As for exports, Energy Aspects said a slowdown is not expected. In particular, the firm has substantially increased its expectations for Chinese LNG demand this summer, largely on the back of the recovery in industrial demand outperforming its forecast.

“There has also been a tailwind of unseasonably hot weather in Northeast Asia, which has substantially driven up power sector gas demand for cooling relative to our weather-normalized expectations,” Energy Aspects said.

There is still also ample incentive for Asian firms to take their LNG supplies well ahead of winter, given the risks of another run-up in the region’s spot prices similar to last January, according to Energy Aspects. “There is still a strong contango” in the Japan Korea Marker (JKM) near-term curve that “justifies buying and holding LNG and/or underground storage.”

Meanwhile, European storage has been left high and dry given the rampant Asian LNG demand. Tudor, Pickering, Holt & Co. (TPH) analysts said European inventories rose by 87 Bcf in the most recent reference period. Although this was slightly above seasonal norms, Title Transfer Facility prices hit a record high. The spike was tied to not only the lower-than-normal storage stocks, but also lower pipe flows into the continent, strong pricing from Asia, and all-time high carbon pricing for the continent.

“On pipe flows, Russia has been a key driver as flows have fallen 1.8 Bcf/d versus norms, combining with recent maintenance on key pipelines over the past week to further pressure European inventories,” TPH analysts said. However, with the maintenance complete, Russian flows have returned to seasonal norms of 15.5 Bcf/d.

At the same time, with JKM pricing suggesting Asia could continue to garner the bulk of cargoes, this limits the potential for European storage to make up lost ground. The increase in pricing for carbon has put further pressure to switch from coal to gas in Europe.

This is increasing seasonal demand in the traditional injection season, according to TPH analysts, “with limited availability of alternatives amidst a tight global market despite the push to decarbonize.”

Once summer heat subsides, the focus should turn to winter. Bespoke’s Lovern said the U.S. gas market hasn’t experienced a cold winter since 2014-2015. With the robust level of LNG exports, and about 7 Bcf/d of exports to Mexico, “it will catch people off guard when it happens again.”

Elsewhere across the United States, storage inventories also are tracking below historical norms. EIA said Thursday Pacific storage inventories slipped by 1 Bcf for the week ending July 23, also because of extraordinary heat. East inventories rose by 21 Bcf, while Midwest stocks rose by 19 Bcf, according to EIA. The Mountain region climbed by 1 Bcf.

Total working gas in storage as of July 23 climbed to 2,714 Bcf, which was 523 Bcf below year-ago levels and 168 Bcf below the five-year average, EIA said.

While trading patterns were all over the place across much of the United States, Northeast prices painted a clearer picture.

Forecasts for not-so-hot weather for the first week of August, at least, were seen lowering demand. Maxar’s Weather Desk said the eastern half of the country could see a round of below-normal temperatures in the next week or so. The cooling is courtesy of a trough over the region, associated storminess along a frontal boundary settling along the Gulf Coast, alongside high pressure pulled southward from Canada.

However, by the second week of August, the forecast again trends warmer in the East. That would be consistent with various weather models in projections of a ridge over Eastern Canada and the Northeast. Maxar said this should support above-normal temperatures for most of the period, but confidence remains on the low side of moderate.

Meanwhile, RBN Energy LLC this week revised downward its supply outlook for Appalachia. On an annual basis, the updates keep the forecast nearly flat at about 32.2 Bcf/d. However, 2022 volumes were reduced from the previous forecast by 1.7 Bcf/d to about 36 Bcf/d. Supply is expected to average 37.1 Bcf/d in 2023, off 2.4 Bcf/d from the prior outlook.

“With prices at multi-year highs, we earlier expected more of a rebound in rig and new well counts,” said RBN analyst Sheetal Nasta. “However, that has not happened.”

While Appalachia’s rig count is higher than the bottom of 30 rigs in early December, it’s not showing much sign of budging, according to Nasta. Furthermore, the rig count is still off the 45-80 range seen in the 2019-20 timeframe, before Covid-19 lockdowns.

One reason for the stalled rebound in rig counts is that producers may be hemmed in by their hedges, Nasta said. Producers added significant hedges in 2020, during the “super contango” — when Henry Hub futures were below $2.000 for the nearby months. However, prices further out on the curve were “a good bit higher,” in the $2.50-3.000 range.

“Until those hedges roll off and additional hedges kick in at the higher price levels, we could continue to see a delayed response in Appalachia rig counts.”

Management for EQT Corp., the largest U.S. natural gas producer, said during the 2Q2021 conference call it won’t chase short-term gains on the stronger price signals that have recently emerged. Still, the company increased its capital expenditure guidance for the year to an estimated $1.100-1.175 billion from $1.025-1.125 billion. This growth aligns with a rosier outlook for the market.

EQT has 70% of its 2022 volumes hedged at a floor price of $2.80. The prompt month Henry Hub benchmark has been trading above $4.00 in recent days and aside from some weather demand-related fluctuations, the higher prices appear here to stay. The Nymex strip showed the balance of the year (September-December) averaging $3.975 on Friday. The Calendar 2022 strip averaged around $3.460.

TPH analysts said a flurry of updates to gas hedge books have been taken “quite negatively by investors, as upstream operators leaned more aggressively into 2022 hedging with significant volumes now contracted. For some exploration and production companies, the big surprise was not only the price at which producers locked in commodities, but also the quantity of volumes producers were willing to commit. This  caused significant downward revisions to consensus expectations for next year, according to TPH.

“While we still believe investors are supportive of methodical hedging in the upstream space, particularly for producers with more levered balance sheets, clients would prefer operators to reduce hedging exposure over time to less than 50% of the production base and generally prefer low-leverage producers to be in a less hedged position still,” TPH analysts said in a note to clients on Friday.

Given the near-term weather outlook and the more moderate outlook, though, forward prices in Appalachia and the Northeast failed to reflect any major concerns on the supply outlook. Prices were down sharply at the front of the curve