The Eagle Ford Shale and Williston Basin led a surge in U.S. onshore drilling activity during the week ended Friday as the domestic rig count rose nine units to an even 500, according to the latest figures from Baker Hughes Co. (BKR). 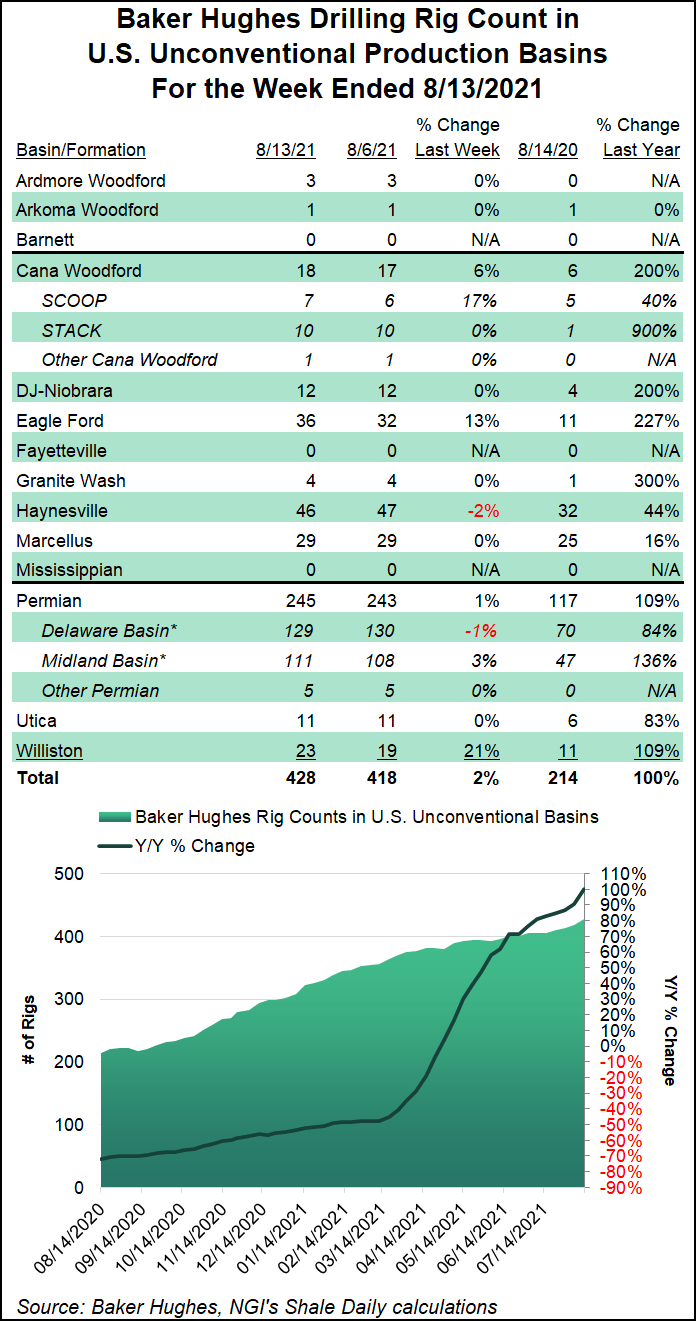 Ten oil-directed rigs were added in the United States for the week, offsetting a one-rig decline in natural gas-directed drilling. The combined 500 active U.S. rigs as of Friday is more than double the year-ago tally of 244, according to the BKR data, which is based in part on data from Enverus.

Eight land rigs were added domestically during the period, along with one in inland waters. The Gulf of Mexico dropped one rig from its total, falling to 13. Seven horizontal units and two vertical units were added, while the total number of active directional rigs remained unchanged at 27.

In Canada, five oil-directed rigs and three gas-directed rigs joined the patch week/week, sending the Canadian count eight units higher to 164. That’s up from 54 in the year-ago period.

The combined North American count finished the week at 664, versus 298 a year ago.

Broken down by play, the Williston and the Eagle Ford each added four rigs to their respective totals for the week. The Permian Basin followed with a net gain of two rigs. The Cana Woodford added one rig overall, while the Haynesville Shale dropped one rig, the BKR data show.

Broken down by state, New Mexico posted the largest net gain for the week at four, with Texas picking up three rigs and North Dakota adding two overall. California added one rig week/week, while Alaska, Louisiana and Oklahoma each dropped a rig from their respective totals.

After climbing to $75/bbl in July, Brent crude oil prices are on track to average $72 from August through November of this year, according to updated projections published earlier in the week by the Energy Information Administration (EIA).

The latest Brent forecast, detailed in this month’s Short-Term Energy Outlook (STEO), suggests relatively little change in EIA’s price outlook since last month’s report, when the agency predicted an average price of $72 for the second half of this year.

Prices for the crude benchmark are seen retreating to $66 in 2022 as supply growth — from U.S. tight oil production and output from the Organization of the Petroleum Exporting Countries and its allies — outpaces growth in global consumption. This comes as prominent energy lenders said recently that the oil and gas sector has clearly turned a corner following the rebound in oil prices and the surge in natural gas demand this year. Bankers anticipate increased drilling and the beginning of stronger loan demand in the second half of 2021 – a first since prior to the coronavirus pandemic.