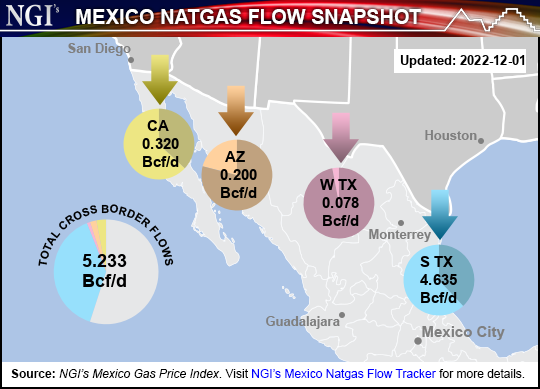 On Monday, the December New York Mercantile Exchange natural gas contract rolled off the board at $6.712/MMBtu. January as the front month has been up and down since. On Thursday, the January contract settled at $6.738, off 19.2 cents day/day. February futures slid 18.7 cents to $6.631.

“With prices around $6, buyers in Mexico aren’t really concerned as they were in the summer,” a Mexico City-based marketer told NGI’s Mexico GPI. “They seem pretty confident.”

Mexico imported 5.233 Bcf via pipeline from the United States on Thursday, with 4.365 Bcf exiting through South Texas.

U.S. natural gas demand is expected to intensify later in December, strengthening prices, although there are numerous caveats.

NatGasWeather analysts said cold weather “might prevent natural gas prices from plunging too far.” But healthy production could stymie this, along with the fact that there are still “no signs of when Freeport LNG will finally resume operations, but with many expecting it will be further delayed. And it’s worth noting the weather models teased a frosty U.S. pattern Dec. 1-7 only to back off considerably.”

On Thursday, a project was launched. CFEnergía, the state company’s international marketing arm, put out a call for interest in an LNG export project in Coatzacoalcos. Capacity would be up to 600 MMcf/d.

The offer is directed “to investors and private companies in the energy sector to gauge interest in the development of infrastructure for the liquefaction and commercialization of a liquefied natural gas in the port of Coatzacoalcos, Veracruz, Mexico.”

The Coatzacoalcos project would replace a previously planned LNG export facility planned for Salina Cruz, on the Pacific Coast. Gas from Coatzacoalcos would be sent to Europe.

Earlier in the week, CFE also announced it had struck a deal with French firm Engie SA for the expansion of the Mayakan pipeline in the Yucatán Peninsula.

In Mexico, NGI natural gas cash prices rose on average during the course of November. On Wednesday, Los Ramones was down 3.7 cents day/day to $5.932. Monterrey via the Mier-Monterrey system fell 3.7 cents to $5.932.

On Thursday, the Energy Information Administration (EIA) reported a 81 Bcf withdrawal from natural gas storage inventories for the week ending Nov. 25. The result was higher than normal for this time of year.

The South Central withdrew 19 Bcf, which included a 15 Bcf drop from nonsalt facilities and a 4 Bcf pull from salts. Until Mexico develops storage capability, this is the storage system most readily available to the country. In good news for Mexico, South Central storage has seen injections rise at a clip such that levels now are higher than the five-year average.