Too much natural gas supply and less summer demand than expected have led BNP Paribas to reduce the outlook for third quarter prices to $4.05/Mcf, down from a forecast of issued earlier this month of $4.55. 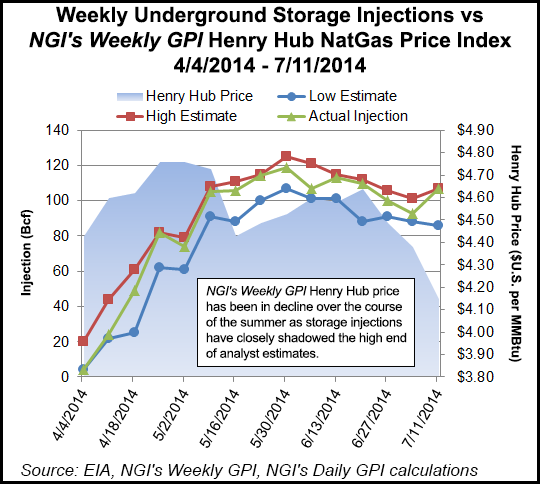 Analyst Teri Viswanath, who directs U.S. natural gas strategy for the firm, discussed the outlook for domestic gas markets on Friday. She was joined by staff meteorologist Anneliese Alexander, who offered her take on weather for the next few months.

Gas prices are expected to continue to deteriorate through August, Viswanath said.

“The massive sell-off in the last couple of weeks should continue,” said Viswanath. “We should see that continue through early August, much like last year.” The “real story…is heavier-than-normal demand this fall which should lift prices earlier in the season.”

Prices have dipped below $4.00, and there’s the possibility of further deterioration as cooling demand begins to ebb. The analyst is optimistic that “supportive fundamentals,” including coal-to-gas switching and an early start to winter will lift gas prices before the end of the storage season.

However, “maintaining a 50 cent premium to year-ago levels, the front contract could potentially decline another 25 cents to $3.75 next month.”

Storage injections over the past two months has “outsized” expectations.

U.S. gas end-month inventory projections were revised to 3.512 Tcf Bcf by the beginning of October, well ahead of an earlier projection of 3 Tcf. The estimate is below the Energy Information Administration’s, which has forecast that 3.424 Tcf will be in storage.

More important, she said, is storage injections may be well above five-year averages through September.

“Despite the current mild weather, the multi-year slackness in the balances was eliminated this past winter, with the build in inventories likely to remain constrained next year with structural demand growth.”

To reduce gas demand, prices would have to rise significantly to shift enough load back to coal generators. There aren’t a lot of positives from the weather forecasts to lift gas demand this summer, said Alexander.

“Increased shale supply security has elevated the importance of weather in establishing the general trend for natural gas prices — with extreme weather required to push prices out of narrow trading ranges,” Alexander said.

The recent “extremely mild conditions are reducing the potential for peak cooling demand, causing the market to write-off the balance of the summer with prices dipping below $4.00/MMBtu.” Next week may provide the hottest temperatures of the season.

The promised El Nino has turned into “El Nothing,” said Alexander. “El Nino has come on much more slowly and weaker than advertised. It is still generally likely to occur, but now not until fall.”

In a review of recently filed gas plant operations data, utilities currently are paying “anywhere from $1.50-6.50/MMBtu for their coal deliveries,” Viswanath said.

“By plotting delivered coal prices against plant capacity levels, it becomes clear that at best, only 37% of U.S. coal plants would operate if gas prices remained at or below $3.00. With prices above $4.00, however, at least two-thirds of installed coal capacity would theoretically operate at a profit.”

More gas demand will be coming as soon as this fall, as coal-fired plants begin a massive retirement. Capacity expected to be retired through 2016 “is more than five times greater than retirements performed in the preceding five-year period,” said Viswanath.