With the July natural gas bidweek over and trading of the August futures contract in full swing, natural gas prices seem to be picking back up — at least at points near major demand centers such Texas Eastern M-3, and Transco Zone 6 NY. All of this is occurring despite the current onslaught of triple-digit gas storage injections. 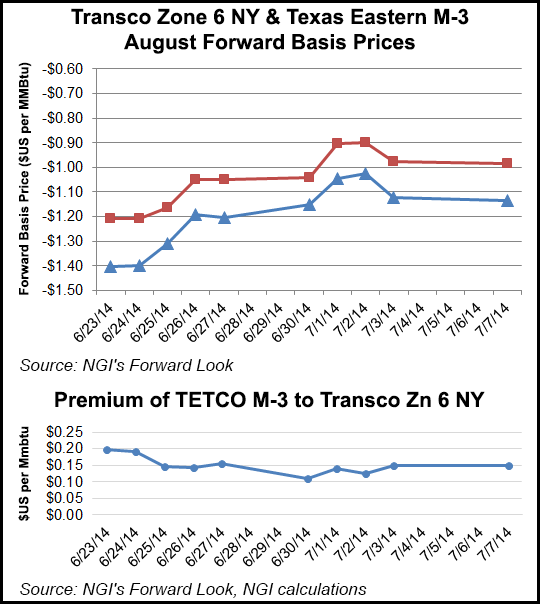 Over the past two weeks August natural gas basis prices to the Henry Hub at these two points have risen significantly, with the largest change happening at TETCO M-3, which experienced a gain of 26.8 cents since Monday, June 23, according to NGI’s Forward Look issue dated Monday, July 7. But even with TETCO M-3’s increase, the point still sits at a discount of $1.135 to the Henry Hub futures contract.

“Now that M-3 is serving Manhattan along with other populated areas of the northeast its reasonable for us to expect prices here to be a little more susceptible to summer cooling demand than they might have been in the past” said NGI Markets analyst Nathan Harrison. “Over the past two weeks Transco Zone 6 NY has mirrored the gains on TETCO M-3 rising a full 22.2 cents to a basis of -$0.985 on July 7, likely because of warmer weather expectations for August. The August basis seems to be more bullish than the recently expired July which, while prompt, slid most of June amid a series of estimate-topping triple-digit storage injections and forecasts of mild summer weather.”

Last Thursday, the Energy Information Administration reported an injection of 100 Bcf for the week ending June 27, which was right on target with expectations. August futures on Thursday climbed 4.9 cents to close at $4.406.

Looking out to the winter strip, both M-3 and Transco Zone 6 NY basis prices have picked up a bit recently, showing a two-week rise of 14.9 and 34.2 cents, respectively. The winter strip basis for Transco Zone 6 NY is currently $3.778, trading about two dollars and thirty cents higher than TETCO M-3, which registered a winter strip basis of $1.461. NGI analysis chalks up this difference to the fact that M-3 still serves a lot of Philadelphia demand, which isn’t quite as robust as what is seen at New York on Transco.

“After a series of eight consecutive 100-plus Bcf injections and optimism that storage caverns may return to near-normal levels ahead of the heating demand season it is hard to make sense of a rise in the winter strip,” said Harrison. “One possibility is that the East Region is still sitting below one Bcf, and at only 72% of its five-year average for the week ending June 27, which may not be enough to satisfy some in the market still rattled by last year’s brutal winter.”

Tim Evans of Citi Futures Perspective saw the 100 Bcf build last week as “still bearish relative to the 68 Bcf five-year average for the date. The build was somewhat less than the 106 Bcf forecast from our own model, suggesting some minor tightening of the background balance in the market relative to the prior week’s 110 Bcf build, but not a major change.”

Inventories now stand at 1,929 Bcf and are 666 Bcf less than last year at this time and 790 Bcf below the five-year average. In the East Region 65 Bcf was injected and the West Region saw inventories up by 16 Bcf. Inventories in the Producing Region rose by 19 Bcf.