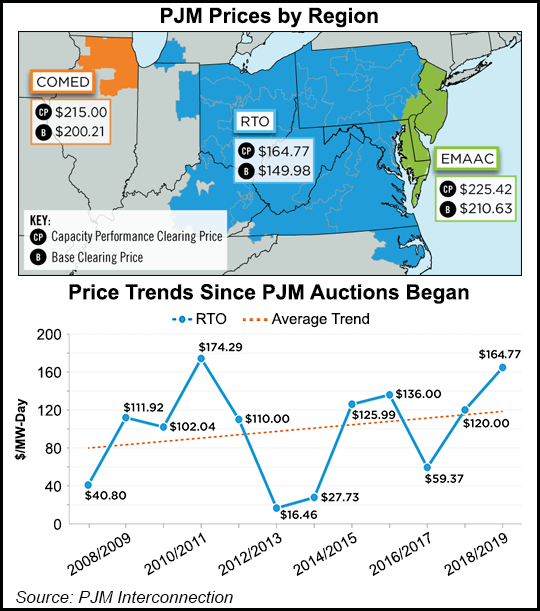 “Two consecutive cold winters with natural gas interruptions and the rapid pace of coal retirements have put considerable pressure on the system,” said PJM CEO Terry Boston. “Clearly, PJM had to act decisively with the introduction of capacity performance to ensure firmer fuel supplies and other improvements for the continued reliability of the grid.”

Incremental capacity resource additions for 2018-2019 included 2,352 MW of new combined-cycle natural gas generation and another 548 MW of uprates to existing gas resources, according to auction results released by PJM. The auction attracted more than 3,500 MW of new generation. A total of 11,084 MW of demand response was procured for 2018-2019, 1,484 MW of which is capacity performance. Energy efficiency totaled 1,247 MW, with 887 MW being capacity performance. Renewable resources clearing in the auction totaled 14,347 MW nameplate.

The U.S. power market’s largest grid operator supplies 61 million people in all or parts of Delaware, Illinois, Indiana, Kentucky, Maryland, Michigan, New Jersey, North Carolina, Ohio, Pennsylvania, Tennessee, Virginia, West Virginia and the District of Columbia. Results of this year’s capacity auction enable members to sell their generation or buy it for their customers for delivery three years in the future.

“Everyone is a winner,” Tudor Pickering, Holt & Co. (TPH) analysts said of the auction. Investors had expected about $150/MW-day and sell-side estimates were closer to $160/MW-day across PJM, but the 2018-2019 auction cleared generally in line with TPH’s bullish expectations, the analysts said in a note Monday. “More importantly, the result is sustainable. We have emphasized a high clearing price by itself would not be enough as the price needs to also be sustainable. We found a number of reasons to believe the capacity performance clearing price will be sustainable over several auctions.”

Standard & Poor’s (S&P) released a report that concludes pricing in regional power capacity markets in the Northeast has strengthened and will be less volatile because of measures taken by the Independent System Operator-New England to mitigate inefficiencies and eliminate arbitrage opportunities. The most significant change is the pay-for-performance scheme that redistributes payments from underperforming assets to overperforming ones, S&P said.

PJM’s auction is usually held in May, but it was delayed this year to allow it to include the new capacity performance requirement approved by the Federal Energy Regulatory Commission in June (see Daily GPI, June 11).

Two transitional auctions to integrate capacity performance into years for which the forward auctions have already been held will be Aug. 26-27 (2016-2017 delivery year) and Sept. 3-4 (2017-2018 delivery year).