June natural gas forward prices shot up an average 10 cents from May 18-24 as sweltering heat on tap across the United States in the coming weeks was expected to continue driving strong power burns. 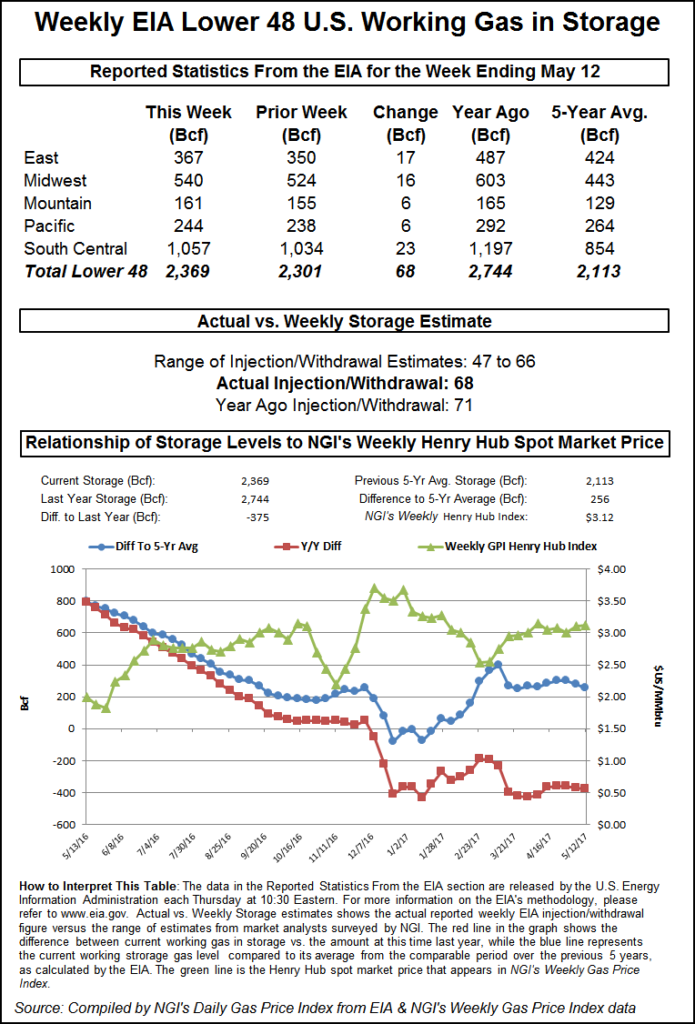 Meanwhile, the most recent storage data from the U.S. Energy Information Administration (EIA) failed to illustrate the oversupplied supply/demand picture the market seemed convinced of not too long ago, providing an already bullish market with even more ammunition, according to NGI’s Forward Look.

The bulk of increases occurred early in the week as Nymex June futures shot up about 10 cents last Tuesday (May 22) as weather models trended warmer for the remainder of May and into June. Typically, under normal weather conditions, heating degree days (HDD) continue to outnumber cooling degree days (CDD) until May 14. Thereafter, CDDs increase steadily until they reach a peak in late July, while HDDs decline and fall to near zero by June 15.

However, with record-setting warmth in the country during the first half of the month failing to deliver the string of 110 Bcf-plus injections the market expected, that is now “quickly becoming a bullish factor,” Mobius Risk Group analysts said. Weather forecasts for the rest of May called for a continuation of the prevailing weather pattern that has sent temperatures along the Gulf Coast well into the 90s and even into the 100s in some areas over the past week. Houston was forecast to see triple-digit temperatures by June 1, according to local forecasters, although AccuWeather showed highs stalling in the upper 90s.

Forecasters at NatGasWeather said the most recent weather model runs overnight Thursday held onto hotter trends for the early part of the May 28-June 1 week and were also slightly hotter for the first few days of June. However, the data held mostly comfortable conditions over the East June 5-8.

The first week of June still looks quite hot over Texas and the South with highs of 90s to 100s, but the markets may prefer to see more heat in the East in order to view fundamentals as bullish. With Texas into the South quite hot, but with the eastern part of the country comfortable, “we see the early June pattern as neutral with demand near five-year averages.”

If the current y/y growth in power burn continues through the remainder of the storage refill season, it could leave inventories at much lower-than-average levels. “We estimate that if production continues at its current 7.2 Bcf/d higher rate through the refill season, and power burn continues at 2.0 Bcf/d higher, that storage would end October at ~3.4 Tcf (~10% below average),” Jefferies analysts said.

In the near term, data and analytics company Genscape Inc. estimated Thursday’s power burns were 27.4 Bcf/d and would rise to 30.2 Bcf/d Friday, then near 32.8 Bcf/d by the end of the week ending June 1. New England, meanwhile, was poised to set a demand record for May as the heatwave was expected to cause regional demand to pop to 2.7 Bcf/d on Friday (May 25), a 1 Bcf/d day/day gain and more than 1.5 Bcf/d above the month-to-date average. Should the value hold following revisions and no-notice, it would mark a new single-day high for May as Boston temperatures were forecast to climb into the mid- to upper 80s, about 20 degrees above normal.

“While Friday’s nominated 2.7 Bcf/d of demand is shy of early-April levels, those were driven by HDDs. It is rather uncommon for CDD-driven demand in New England to breach 2.6 Bcf/d,” Genscape natural gas analyst Josh Garcia said. Prior to Friday, the record high for a May-September period was 2.64 Bcf/d on July 22, 2011, when the daytime high was also 88 degrees.

The stronger y/y demand picture that has emerged across the United States was reflected in the most recent storage data. For the week ending May 18, the EIA on Thursday reported a net injection of 91 Bcf into storage inventories. The reported build was in line with expectations and came in larger than the 74 Bcf build recorded last year and the five-year average 89 Bcf injection. In fact, Jefferies noted that the first three May injections have all been above average.

However, Mobius analysts pointed out that the week ending May 18 had essentially the same number of total degree days as the five-year average for the same period, but total supply was up 8.4 Bcf/d versus the comparable five-year average, “and yet we only built an additional 0.3 Bcf/d.

“If the five-year average injection pace were to be mirrored over the remaining 24 weeks of the injection season, there would be 3.3 Tcf in storage heading into winter,” Mobius said. Indeed, growing exports, both to Mexico and in the form of liquefied natural gas (LNG), are on pace to increase y/y, contributing to some of the increased demand.

Meanwhile, nearly 3,000 MW of natural gas-fired generation is set to come online this summer in the PJM Interconnection territory, with some plants already in partial service, according to Garcia. The new plants would replace 3,743 MW of coal-fired generation set to retire during the season, although most of those plants were already operating at reduced capacity factors.

Total working gas in underground storage as of May 18 stood at 1,629 Bcf, versus 2,433 Bcf last year and five-year average inventories of 2,128 Bcf. The year-on-year storage deficit decreased week/week to 804 Bcf from 821 Bcf, while the year-on-five-year deficit narrowed slightly to 499 Bcf from 501 Bcf, EIA data show.

Jefferies estimated that an incremental 5 Bcf/d y/y of gas needs to be injected for the remainder of the refill season to reach 3.8 Tcf. Roughly 8.4 Bcf/d was injected last summer. Given that LNG, power burn and industrial demand are likely to be higher than in 2017, “we believe that production needs to average 8 Bcf/d higher y/y in order to reach average storage by the end of the refill season,” analysts said.

For its part, Mobius estimates that production needs to grow by at least another 1.5-2 Bcf/d from here (to around 80.5 Bcf/d from 78.5 Bcf) by the end of October to keep end-of-season inventory levels above 3.4 Tcf. With a low projected end-of-October inventory level of around 3.5 Tcf, “there is not a lot of room for error in production growth forecasts, normal weather assumptions or continued unreconciled demand model errors,” analysts said.

Therefore, those factors could all be catalysts for an even higher natural gas price heading into the winter. On the other hand, greater-than-expected production growth and mild temperatures could send prices lower but should not create “containment pricing” in late October and early November since inventory levels are not projected to exceed 3.7 Tcf, even in the mildest of weather scenarios.

May production thus far has averaged above 78 Bcf/d, the first time on record according to Jefferies, but ongoing maintenance has continued to inhibit significant growth. Genscape said Lower 48 volumes on Thursday (May 24) were down 1.12 Bcf/d from Wednesday, with Northeast declines leading the way because of maintenance on the Tennessee system in Tioga and Susquehanna counties in northeast Pennsylvania.

Texas production also posted declines, while Permian Basin volumes in West Texas and New Mexico have been in “modest retreat past few days with maintenance constraining northbound takeaway capacity,” Genscape analyst Rick Margolin said. Estimated production out of the basin was around 8 Bcf/d on Thursday, about 0.3 Bcf/d below the May 19-20 weekend, led primarily by a 160 MMcf/d drop in flows on Natural Gas Pipeline Co. of America out of its Permian zone. Rockies volumes were marginally lower from declines west of the Continental Divide.

Maintenance set to begin on Texas Eastern Transmission (Tetco) provided some additional support to prices in South Texas. Beginning Tuesday (May 29) through June 13, Tetco plans to conduct investigations on its 16-inch diameter Line 21 between the Thomaston and Provident City compressor stations in South Texas. During the outage, up to 263 MMcf/d of receipts would be unavailable for flow, according to Genscape. Reroutes are a strong possibility, however, considering the connected nature of inter- and intrastate pipelines in Texas.

In addition, Tetco plans conduct an outage from Wednesday (May 30) to June 13 between the Colerain compressor station and the mainline in its Market Zone 2. Gas sourced on the lateral would be unavailable for flow to the mainline for the duration of the event, creating bullish pressure for M2 spot prices, although reroutes to other pipes are possible. Net receipts from affected meters have averaged 226 MMcf/d and maxed at 250 MMcf/d over the last 30 days, Genscape said.

Meanwhile, Tetco next Friday (June 1) plans to begin replacing a segment of pipe between the St. Francisville and Union Church compressors in its East Louisiana tariff zone. Flows on the southern end of its 30-inch diameter line would be limited to 972 MMcf/d until June 14. Flows at St. Francisville and Union Church have had minimal difference, averaging 1,054 MMcf/d and maxing at 1,333 MMcf/d during the last 30 days, although they have been significantly reduced over the last few weeks, Genscape said. This may create bullish pressure on Gulf spot prices should demand spike to similar levels to late April and early May.

While strong double-digit gains were the norm for the fourth week of May, some pricing locations proved to be surprising standouts as their rebound has considerably outpaced that of Nymex futures. For example, El Paso-Permian June forwards surged 25 cents to reach $1.869, while July and the balance of summer (July-October) each climbed 21 cents to $1.974 and $1.89, respectively. The winter 2018-2019, meanwhile, was up a dime to $1.84, Forward Look data show.

“A continuance of this trend would call into question the theory proffered by many that gas markets in crude-centric locales were left for dead,” Mobius analysts said.

Western Canadian markets also surged May 18-24 as maintenance curtailed field receipts by as much as 1.8 Bcf/d, according to Tudor, Pickering, Holt & Company (TPH) analysts.

With the maintenance having little impact on export volumes, withdrawals have been required to meet demand. “We’ve drawn gas each of the last three days, and this could continue for another week until work on the Grande Prairie Loop is complete,” TPH said on Friday. While its focus is clearly on the weeks ahead, the latest storage inventory report showed a 5 Bcf build versus a seasonal norm of 8 Bcf.

Analysts are eyeing a 4 Bcf build in the next storage report for the week ending May 25. “With the data lag, we won’t see the impact of maintenance for another two weeks, at which point an inventory draw is a distinct possibility,” TPH analysts said. “The forward strip seems to be coming around on our bullish AECO view, as summer contracts have increased 50% over the past two weeks, yet the stocks aren’t moving.

“We see this as an excellent opportunity to put some chips on the table.”