Spot gas prices for the April 6-9 week posted stout gains across much of the Lower 48 as sub-$2/MMBtu gas continued to incentivize strong power burns despite a lack of significant demand. Led by gains on the West Coast, NGI’s Spot Gas Weekly National Avg. jumped 16.0 cents to $1.520. 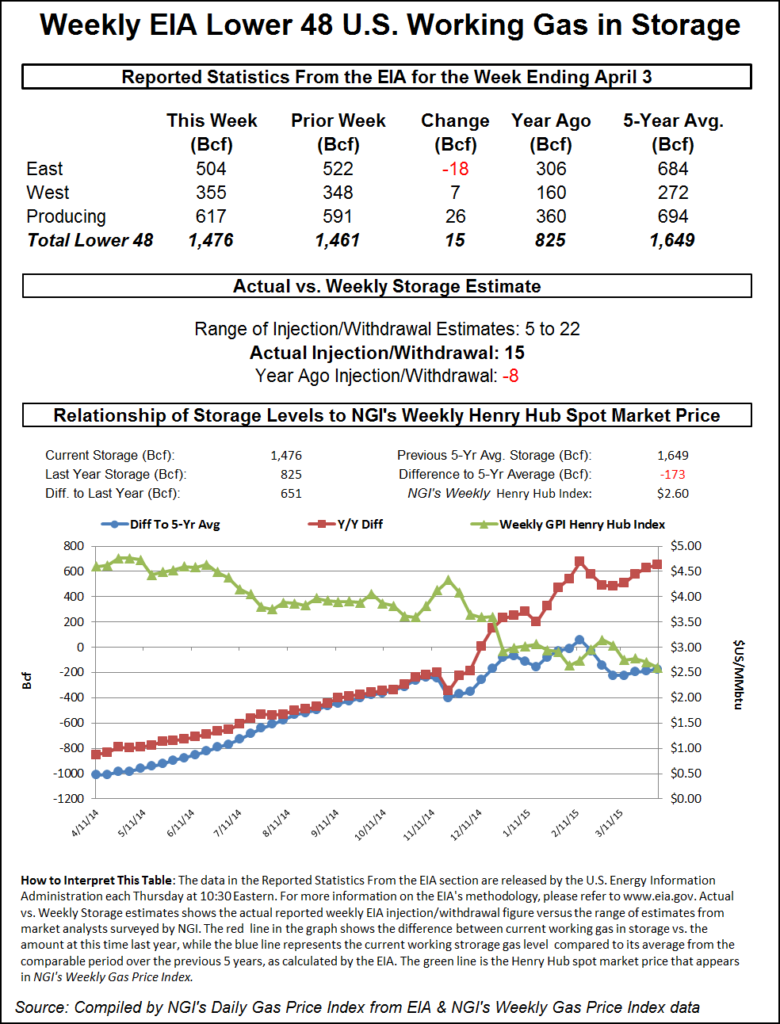 Wet weather systems that circulated through California and dumped snow in upper elevations boosted prices for the week. SoCal Citygate shot up 42.0 cents to average $1.885 for the four-day period, while increases across the rest of the state were mostly capped at around 20 cents.

Other Texas points followed the general move higher, with prices posting gains of as much as 27.0 cents. Similar increases were seen throughout the Midcontinent and Midwest, while farther east, Dominion South rose just 8.5 cents week/week to average $1.375. Other markets on the East Coast also posted moderate gains of less than 15.0 cents.

It may have been a short work week, but wild swings certainly were not lacking in futures trading ahead of the Easter holiday as weather models became less convincing of a chilly April and government data highlighted significant demand destruction stemming from shutdowns and stay-at-home measures being implemented to slow the spread of Covid-19.

The May Nymex contract closed Monday’s session at $1.731 after charging up 11.0 cents from April 3’s settlement and then soared to within a dime of the $2 mark on Tuesday. By Wednesday, however, once-supportive weather models started to shave off demand and on Thursday, the Energy Information Administration (EIA) reported a much larger-than-expected injection into storage inventories.

The EIA’s reported 38 Bcf build provides “a clearer sign that the data we have is not indicating the proper amount of demand destruction that is ongoing with the shutdowns,” said Bespoke Weather Services. “This makes for two very bearish numbers in a row in terms of balances.”

Ahead of the EIA report, analysts had been predicting an injection between 9 Bcf and 35 Bcf. A Wall Street Journalpoll of 12 analysts showed estimates averaging at a 21 Bcf build. A Bloomberg survey arrived at a median build of 24 Bcf, as did a Reuters survey. NGI’s model estimated the injection at 37 Bcf.

The EIA’s 38 Bcf build compares with last year’s 25 Bcf increase in storage and the five-year average injection of 6 Bcf.

Weather model behavior, meanwhile, became more reminiscent of winter as it peeled back projected demand for next couple of weeks, sealing losses to end the short week. The Global Forecast System lost a couple more heating degree days (HDD) overnight Wednesday, while the European model lost a heftier 11 HDD, according to NatGasWeather. Overall, the forecaster said that weather data remained quite cold April 10-19 but was too mild thereafter.

Also of important consideration, all U.S. natural gas markets were to close Friday for the Good Friday/Easter holiday, “leaving considerable risk of a gap up or down on the Sunday reopen,” the firm said.

The May Nymex gas contract settled Thursday at $1.733, down 5.0 cents day/day and just a couple of ticks above Monday’s close.

Looking ahead, supply remains one potential catalyst for renewed upside in natural gas. Genscape Inc. noted that daily production prints have been posting notable declines and while the firm can pinpoint “a good portion” of the drops to maintenance in certain regions, some of the declines are likely reactions to the rapid collapse of prices.

The firm’s top-day estimate of Lower 48 production on Wednesday showed a more than 1 Bcf/d day/day drop, having sunk just below 91 Bcf/d. While the estimate was likely to get revised higher, “at the moment, it marks the lowest single day of production since early February, when freeze-offs whacked more than 1 Bcf/d offline,” Genscape senior natural gas analyst Rick Margolin said.

In the latest Short-Term Energy Outlook, EIA said it now expects U.S. dry gas production to average 91.7 Bcf/d this year as producers respond to low prices and the supply shock that’s weighed heavily on oil markets. That would represent a decline from the 92.2 Bcf/d of U.S. dry gas production last year. Last month, EIA had guided for a 3% increase in production.

Volumes are set to fall most in the Appalachian and Permian basins, according to EIA. In Appalachia, the agency noted that low gas prices are discouraging producers from engaging in drilling, while in the Permian, low crude prices should cut associated gas output from oil wells.

Spot gas prices posted widespread losses Thursday as lighter-than-usual demand was expected over the long Easter holiday weekend despite some rather chilly weather on the horizon.

NatGas Weather said “a major pattern change” remained on track as a blast of cold from southern Canada swept across the Midwest and then over the Northeast. The southern United States was expected to remain “warm to very warm,” while a slow-moving weather system was to bring rain and snow showers to California for local cooling, “but again, far from cold.”

Another late-season cold shot was expected to push into the central and northern United States early in the week, although conditions were expected to get milder by later in the week.

Despite the cold air moving into the eastern United States, spot gas prices came tumbling down Thursday. Algonquin Citygate cash plunged 18.0 cents to $1.455 for gas delivered through Monday. Transco Zone 6 NY was down 16.0 cents to $1.305.

Similar decreases were seen across Appalachia and the Southeast. Louisiana points lost up to a dime, as did market hubs throughout the Midwest and Midcontinent.

On the pipeline front, Vector Pipeline was set to begin planned pigging runs on Monday to inspect the entire pipeline on various days through May 11. The pigging is to be done in three main phases, with the most impactful phases occurring next week and April 21-23, which could cut more than 1.5 Bcf/d of receipts and 0.7 Bcf/d of deliveries, according to Genscape.

“During each phase, interconnects along a different segment of the pipeline will mostly be shut-in, except for certain receipts and deliveries scheduled in order to move the pigs,” Genscape analyst Anthony Ferrara said.

The only gas that will be allowed on the pipe is from Chicago-area interconnects delivering gas east of Milford Junction, according to the analyst.

“These Chicago-area interconnects (with Alliance, Northern Border and Guardian pipelines) historically used to flow far larger volumes before being displaced by Rover Pipeline and Nexus Pipeline,” Ferrara said. “Over the past 30 days, these interconnects have averaged only 0.25 Bcf/d, however, they still have the capacity to deliver over 1 Bcf/d onto Vector, so we could see receipts increase to offset the other interconnects being shut-in. “

Segment 2 and 3 pigging should be less impactful, since all major interstate interconnects are located east of Milford Junction.

On the West Coast, maintenance on one of the Southern California Gas (SoCalGas) import lines beginning Monday was expected to cut about 115 MMcf/d of flowing supply for nine days as capacity for the Blythe Sub-Zone is cut to 709 MMcf/d.

SoCalGas also is set to start low-inventory shut-in maintenance at the Aliso Canyon storage facility next Wednesday that would limit both injection and withdrawal capacity to zero. Over the past month, about 5.1 Bcf has been withdrawn from Aliso, averaging about 500 MMcf/d on days with withdrawals, according to Genscape analyst Joseph Bernardi.

“Those withdrawals have all come on days where SoCalGas’ system-wide demand exceeded around 2.7 Bcf/d. For comparison, during the second half of April 2019, SoCalGas’ demand never rose above 2.3 Bcf/d,” Bernardi said.

April has thus far seen colder-than-normal weather in Southern California, but temperatures were expected to warm up by the middle of the week. The Aliso work is set to continue through the end of April.

The various restrictions on the SoCalGas systems had no bearing on spot gas prices. SoCal Citygate cash tumbled 38.5 cents to $1.610 for gas delivered through Monday.