Physical gas for delivery Friday slumped in Thursday’s trading as a strong performance by Northeast points was unable to offset declines in the Gulf Coast, Texas, California and the Rockies. 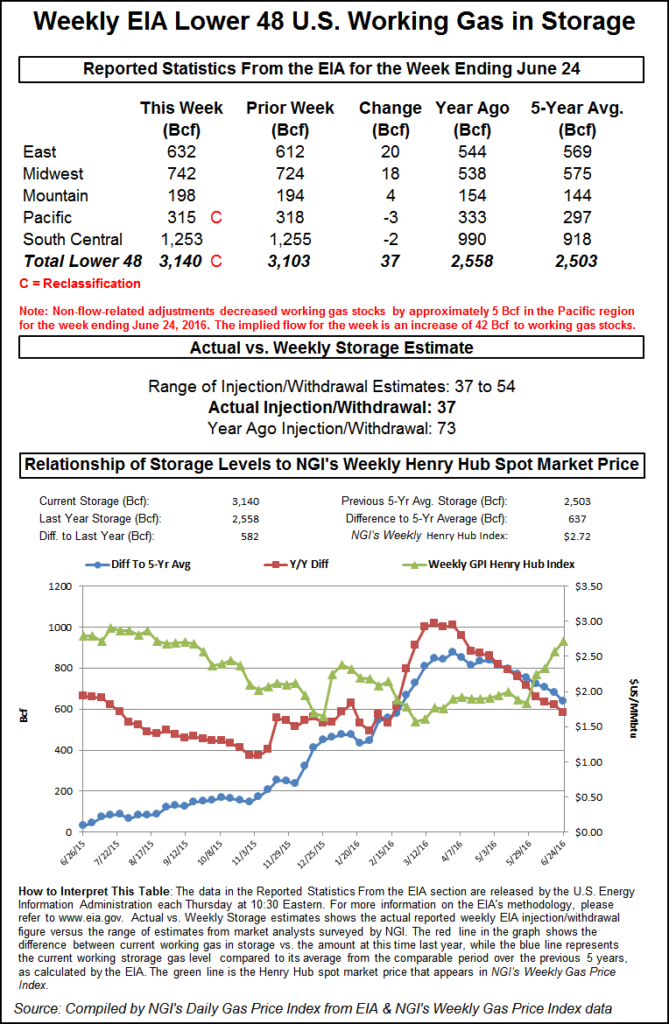 The NGI National Spot Gas Average shed 9 cents to $2.61, but many traders elected to get their deals done prior to the release of storage data by the Energy Information Administration (EIA).

The EIA reported a storage build of 37 Bcf, lower by about 9 Bcf from market expectations. The figure, however, included a 5 Bcf downward inventory revision, thus making the implied flow 42 Bcf. That was good enough for market bulls, and at the end of trading the August contract had marched higher by 6.1 cents to $2.924 and September was higher by $0.060 to $2.918. August crude oil tumbled $1.55 to $48.33/bbl.

Futures traders were impressed with the move. “I thought the market held up pretty well,” said a New York floor trader. “It has a shot at $3, but that is a tough, tough area. Did you see what happened in the crude oil? As soon as it hit $50 it came off 18 cents; $50 was such a benchmark for crude oil and that is the way traders are going to look at $3 natural gas.

“The storage number was low, but I think it will take a lot more of these low builds to push the market through $3. Look for the market to slow down as we are heading into a long weekend.”

Traders didn’t blink at the 5 Bcf adjustment in the Pacific Region, which was likely due to an adjustment posted by SoCalGas on its website Monday (June 20) and picked up in the storage report for the week ended June 24.

“SoCal announced on May 26 they would be adjusting system inventory down by 4.62 Bcf due to adjustments applicable to Aliso Canyon storage. However, the change was not actually reported on the SoCal website until this Monday,” industry consultant Genscape said in a report (see Daily GPI, June 23).

Even with the adjustment traders saw the report as supportive. “The DOE reported a 37 Bcf net increase in US natural gas storage for the week ended June 24, but the data did include a 5 Bcf reclassification of working gas as base gase,” said Tim Evans of Citi Futures Perspective. ” The implied flow was therefore a somewhat less bullish 42 Bcf. Even so, this was less than the 46 Bcf consensus expectation and implied a tighter supply/demand balance, a bullish outcome.”

Inventories now stand at 3,140 Bcf and are 582 Bcf greater than last year and 637 Bcf more than the five-year average. In the East Region 20 Bcf was injected, and the Midwest Region saw inventories increase by 18 Bcf . Stocks in the Mountain Region rose 4 Bcf, and the Pacific Region was lower by 3 Bcf. The South Central Region shed 2 Bcf.

In order to better reflect ever-changing physical market dynamics NGI, as previously announced in a June 1 Price Notice, has added two new regions to the gas price index tables in its newsletters, along with two new price points. As of July 1, NGI has:

In physical market trading California points were the hardest hit as power loads were forecast to take a big dive, and temperatures were expected to trend lower. CAISO forecast that peak power load Thursday would drop from 40,081 MW to 38,686 MW Friday.

AccuWeather.com predicted the Thursday high in Los Angeles of 82 would slide to 79 Friday and 77 Saturday, 4 degrees below normal. San Francisco’s 71 high Thursday was expected to ease to 69 Friday and 67 by Saturday, right at the seasonal average.

Weather forecasts overnight changed little with expectations of a broad ridge of high pressure and anticipated warm temperatures expected to persist with minor incursions of weather systems forecast to temporarily drop temperatures and knock natural gas demand back to normal. It’s next week when things are expected to heat up, literally.

In a noon Wednesday update, Natgasweather.com said that “as the strong ridge of hot high pressure over the West strengthens and expands over the northern and eastern U.S. next week, above-normal temperatures of upper 80s to 100s are expected to become widespread over a majority of the country. This will result in stronger than normal natgas demand and should keep warm/red/bullish colors over vast stretches of the country in eight-15 day outlook maps, although with subtle daily changes that could switch some areas briefly to neutral/normal.

“Going forward, the next weather focus for the natgas markets will be on just how long hotter than normal conditions can last over the northern and eastern U.S. We expect the strong upper ridge to hold over a majority of the country going into mid-July. However, there could be a couple days of minor cooling over the northeastern U.S. around July 10th that will need monitoring.”

After the close of trading Wednesday traders saw the market poised to break through $3, possibly on the release of presumably bullish storage figures in the 10:30 a.m. EDT storage report. “The base the market has built has held and traders were able to lift it higher. I think they will pop it over $3,” a New York floor trader told NGI.

Last year 73 Bcf was injected and the five-year pace stands at 78 Bcf. Houston-based IAF Advisors calculates a lean 37 Bcf injection, and industry consultant Bentek Energy’s flow model sees a 44 Bcf increase. A Reuters poll of 21 traders and analysts revealed an average 46 Bcf with a range of 37 to 54 Bcf.