Not even a heavy-handed intervention by Mother Nature could keep weekly natural gas prices from sliding into the loss column. Hot, humid weather in New York, Philadelphia, and the East Coast sent heat indices deep into triple digits, but at the end of the week the NGI Weekly Spot Gas Average was 6 cents lower at $2.53. 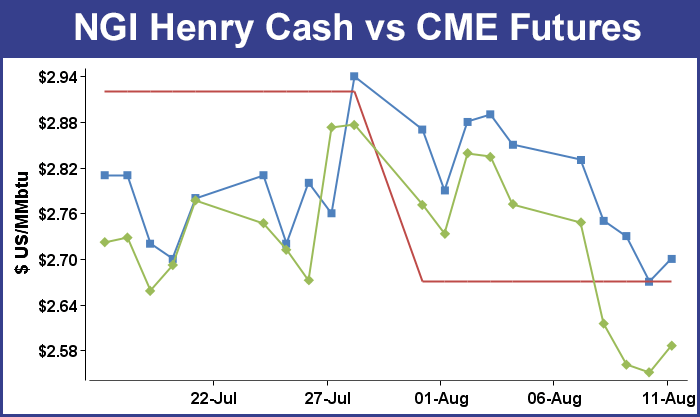 Appalachia and California were both a nickel lower at $1.41 and $2.81, respectively.

Futures traders have come to accept weekly storage numbers far below historical averages and Thursday’s report on working gas inventories by the Energy Information Administration (EIA) was no exception. The EIA reported a build of 29 Bcf, about 4 Bcf greater than industry estimates, and prices had only a mild reaction. At the close September had eased 1.0 cents to $2.551 and October was lower by nine-tenths of a cent to $2.607.

During Thursday’s trading September natural gas was held to less than an 8 cent trading range and after the storage data was released September futures reached a low of $2.529 immediately, and by 10:45 a.m. September was trading at $2.577, up 1.6 cents from Wednesday’s settlement.

“The market seems to want to be supported, but there isn’t a great effort to do so,” said a New York floor trader. “The $2.51 to $2.53 area is being supported and that is what we are seeing. Since the market held, traders are comfortable getting long against that base.”

The trader thought that all in all, the market’s performance was that of a buying opportunity. “At least you know where to put your stop,” he said.

“The data for last week showed a larger-than-expected rebound from the prior week’s 6 Bcf net withdrawal as power sector demand likely eased,” said Tim Evans of Citi Futures Perspective. “This may still reflect the same sensitivity to summer temperature extremes as in recent weeks, but in the opposite direction.”

Inventories now stand at 3,317 Bcf and are 361 Bcf greater than last year and 440 Bcf more than the five-year average. In the East Region 17 Bcf was injected, and the Midwest Region saw inventories increase by 20 Bcf. Stocks in the Mountain Region rose 2 Bcf, and the Pacific Region was unchanged. The South Central Region, however, fell 10 Bcf.

Natural gas traders might do well to follow crude oil. “In defense of the bearish case we have seen time and time again what typically ends the winter to spring pre-season [natural gas] rally is the seasonal dump in crude oil prices,” said Walter Zimmermann, vice president at United ICAP. “That process is well advanced. Crude oil has definitely been under pressure here, and natural gas has been doing an admirable job of holding its own, but as crude oil continues to implode that takes another reason away to chase natural gas prices higher.”

In Friday’s trading physical natural gas for weekend and Monday delivery for the most part, mirrored the screen. Pervasive gains of about a nickel were seen across most market points with the exception of southern California and New England, with California responding to higher power demand and prices and New England and the Mid-Atlantic seeing just the opposite. The NGI National Spot Gas Average rose 4 cents to $2.54.

Futures managed to recover somewhat from earlier weakness and at the close September had risen 3.5 cents to $2.586 and October gained 1.9 cents to $2.626.

The day’s strongest performing points were in Southern California as temperature forecasts, coupled with stout gains in on-peak power were enough to send prices to double-digit gains. Intercontinental Exchange reported that Monday on-peak power at NP-15 rose $11.06 to $49.10/MWh and power at SP-15 jumped $13.96 to $52.05/MWh.

Temperatures and forecast power loads also advanced. Forecaster Wunderground.com predicted that the high Friday in Los Angeles of 82 degrees would rise to 84 Saturday before running up to 91 Monday. The normal high in Los Angeles is 76. Sacramento’s 97 high on Friday was expected to reach 99 Saturday and Sunday, 7 degrees above normal.

Market movements at major hubs were not as pronounced. Deliveries at the Chicago Citygate were flat at $2.66, and gas at the Henry Hub rose 3 cents to $2.70. Kern Receipts came in at $2.58, up 3 cents, and PG&E Citygate deliveries were quoted at $3.14, up a nickel.

Friday’s modest improvement in the September futures had traders thinking the advance would continue. “I think longs are comfortable up against $2.50 and unless weather breaks dramatically I would expect it to hold,” a New York floor trader told NGI.

“I think the low to mid $2.70s is their near-term objective. On pullbacks if they can hold it against $2.68 then they will move the market up to the next level, which would be in the low $2.80s and above.”

Longer term, traders also have an upward bias. “We are maintaining a cautious bullish stance and would suggest holding any long positions established within the $2.60-2.65 zone,” said Jim Ritterbusch of Ritterbusch and Associates in a Friday morning note to clients. “We are staying with the program for now by suggesting stop protection at the $2.52 level. We feel that selling in today’s trade will be tempered to a large extent by the possibility of bullish adjustments to the short term temperature views within the weekend updates.

“But given the late stage of the cooling cycle, the temperature factor will be losing pricing punch going forward, with any significant price spikes heavily reliant upon a major storm event into the GOM. With these items in mind, our previous objective to the $2.89 area is looking increasingly out of reach, and we are adjusting our short-term objective to the $2.75 level. The spread curve is exhibiting some minor weakening but the front September-October switch remains supported at around a 5.5-cent contango. The inability to establish a new wide carrying charge for the summer has thus far been precluded by sizable cash price premiums against the nearby screen that are apt to remain intact through next week despite temperature moderation.”

Gas buyers for weekend and Monday gas for power generation across the New York ISO had their hands full. “Hot, humid and stormy summer conditions will continue the next few days [and] a heat alert is in effect,” said forecaster WSI Corp. in a Friday morning report. “A south-southwest flow around high pressure off the East Coast and a frontal system will support warm and humid conditions across the majority of the state during the next few days. High temps will generally range in the 80s to mid 90s. Elevated humidity will hold the min temps into the mid 60s and 70s.

“Near to slightly higher than average Great Lakes water levels will continue to support short term hydro generation. Recent and expected rain with amounts of 0.5-2 inches-plus will boost streamflow rates during the weekend. A fluctuating south-southwest flow will support modest wind gen through the weekend.”