Robust heat heading into the second half of July and supply concerns following a pair of recent midstream infrastructure incidents helped send natural gas futures sharply higher in early trading Monday. The August Nymex contract was up 52.4 cents to $6.558/MMBtu at around 8:55 a.m. ET.

Last week, Energy Transfer LP shut in 0.2 Bcf/d of capacity on the Old Ocean Pipeline system after a fire, while the latest incident was a reported fire at a Oneok natural gas liquids processing plant in Oklahoma over the weekend.

“In our view, any supply losses are likely to be relatively small on a national basis,” Rubin said.

This comes as liquefied natural gas (LNG) demand has averaged in the low-11 Bcf/d over the last seven days amid “stabilizing feed gas intake” since the start of the month, the analyst said.

“Natural gas has struggled to climb above the mid-$6.00 range since news of Freeport LNG’s extended outage, while technical analysis warns of notable downside price risks,” Rubin said. “Still, strengthening cooling demand in the back half of July…may sustain a tight physical market over the central U.S. and be a significant driver of near-to-medium term upside risk.”

Meanwhile, weather data over the weekend held a “solidly hot and bullish pattern” between this coming weekend and July 24, according to NatGasWeather.

This period will bring “widespread highs of 90s and 100s for strong to very strong national demand,” the firm said. “The pattern might have trended too hot for this period, especially since there’s potential for tropical showers to find ways into the southern U.S. with cooling in time.

“But for now, the natural gas markets will view the weather patterns as solidly bullish. How production trends and the natural gas plant explosion in Oklahoma impact prices are lesser knowns.”

From a technical standpoint, natural gas prices have been “stuck in neutral,” according to ICAP Technical Analysis. 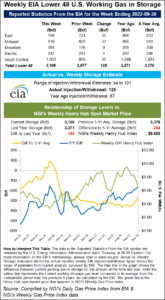