ConocoPhillips’ strategic pivot in 2016 to a value model rather than a growth model provided the Houston-based independent the financial capability to “make rational economic decisions” during the oil market downturn, including curtailing around 400,000 b/d of production. 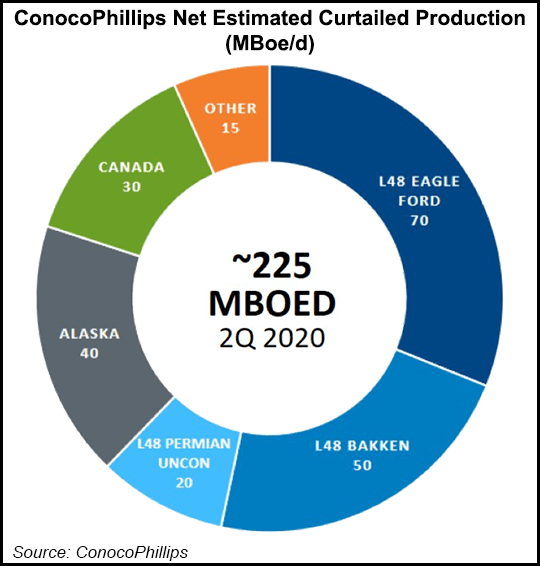 ConocoPhillips curtailed 225,000 boe/d in the second quarter of 2020 and has taken a month-by-month assessment in curtailing volumes in the third quarter. Altogether, around 400,000 b/d of output was cut, making ConocoPhillips “the largest curtailer in North America by far,” according to Fox.

Had ConocoPhillips decided to sell the volumes, the company would have received around $25/bbl and made around $500 million, Fox said. “But we chose to ignore that” and instead the company is set to receive a 20-30% return on its production. It expects to return all previously curtailed Lower 48 volumes by the end of the month, while some small production volumes are to remain offline in Canada, Fox said.

ConocoPhillips began placing more emphasis on value long before it became “en vogue” to do so. Instead, it recognized that the oil and gas sector was facing “a very uncertain future” and “an investor base that was getting disenchanted with growth,” Fox said. “Unfortunately, we were the only company at the time pushing that.”

The industry, he said, needs to improve shareholder return so that it can attract shareholders back into the industry. Having a strong balance sheet, not growing too quickly and having control over capital are the key ingredients in a successful strategy to help companies emerge from downturns on good financial footing.

Too Much Too Soon

ConocoPhillips, which ended June with $7.2 billion in cash and short-term investments, continues to apply these principles when it comes to developing its assets. At a time when the exploration and production (E&P) community is “all Permian, all the time,” the independent has more rigs running in the Eagle Ford. During the quarter, the South Texas play produced an average 162,000 boe/d, while the Permian averaged 52,000 boe/d.

Fox said during the Eagle Ford’s heyday, producers developed the assets very quickly, “too quickly in our view,” and didn’t develop it properly. Soon thereafter, capital started being deployed to the much larger Permian Basin.

“We wanted to make sure we were developing it right, rather than fast,” Fox said.

This meant the company conducted pilot tests on well spacing, achieving the right number of layers and the proper completion designs. Now, ConocoPhillips is sitting on “thousands of well inventory in the heart of the sweet spot of the Eagle Ford,” Fox said.

With vast amounts of infrastructure along the Gulf Coast making for low transportation costs to move those supplies to market, and the play producing less gas than the Permian, the Eagle Ford “is actually the lowest cost of supply than the sweet spot in the Permian in our portfolio,” Fox said.

Emerging from the recent downturn with between $6 billion and $7 billion on the balance sheet, ConocoPhillips understands that in order to ensure its continued success, it has to acknowledge that it doesn’t know where oil prices are heading.

While a recovery in 2021 is expected amid continued economic growth in the wake of Covid-19, the bigger question is what happens beyond next year. “We’re pretty confident there’s going to be a reduction in demand,” Fox said.

This is because of the changes in societal behavior associated with the pandemic, as well as the recessionary impact from the virus. Fox noted that gross domestic product is expected to contract by around 5% year/year in 2020. Altogether, this could equate to a drop in demand between 2-3 million b/d.

However, Fox said there also would be a “very dramatic decrease in supply,” with unconventional resources seeing a potential 3-4 million b/d decline in the 2022-2023 timeframe. “There’s a lot of change happening.”

That said, “it’s difficult to visualize a sustainable oil sector in which prices are below $40,” according to Fox. He finds it feasible to see prices averaging $70, but doesn’t know where prices may be within that band. “We suspect it’ll be up and down like a fiddler’s elbow.”

Therefore, consolidation makes sense in the E&P sector, especially in the Permian, where Fox said more than 100 companies drilled wells in 2019. Consolidation would be “helpful,” he said, if the industry is trying to move to a place where companies are more focused on improving returns. ConocoPhillips in July nearly doubled its leasehold in the Montney in a $375 million deal with Kelt Exploration Ltd.

Fox said any motivation for a company seeking to merge with another should be a desire to improve the balance sheet, reduce costs, change the capital allocation framework and offer higher shareholder returns.

“We, collectively as a sector, can’t form a cartel,” Fox said. “But we can do this in the best interest of shareholders, and that is to moderate growth, allow macros to improve and find a way to make oil and gas great again.”