As the market nears the end of the natural gas injection season next month, industry analysts are looking to the winter season and beyond to see what lies ahead. From what they’re seeing, higher prices may not be as close as some producers may have hoped. 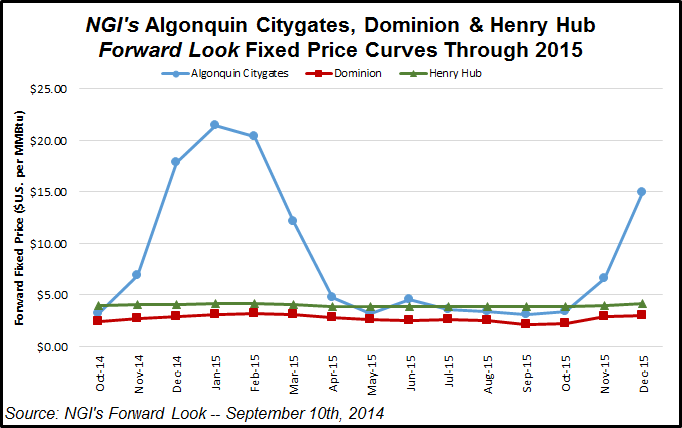 The Energy Information Administration (EIA), in its latest Short-Term Energy Outlook (STEO), has lowered expectations for natural gas prices for the coming year in anticipation of stronger production and other factors. The agency now expects Henry Hub natural gas prices to average $4.46/MMBtu this year and $3.87/MMBtu in 2015, thanks in large part to a continuing production surge, it said Tuesday. The 2015 price forecast is 13 cents lower than EIA had predicted last month (see Daily GPI,Aug. 12).

“The current $3.974 2015 average Henry Hub price in the forward market is still more optimistic than the EIA by about 10 cents, but this could change with further revisions to the STEO,” said NGI Markets Analyst Nathan Harrison. “The situation can be impacted by a host of factors ranging from the shorter term tug-of-war between winter weather and winter storage levels, to farther out concerns with producers’ continued improvements in cost efficiencies.”

Aside from the declining forecasts at the Henry Hub, there is another story that will be playing out over a similar timeframe due to one of the most active shale basins in the country. The Marcellus Shale has been a major source of disruption to Northeast pricing since it came online, and its effects are only starting to be dealt with. The massive swell of gas being unleashed by producers in the basin has depressed prices at many points due to pipeline constraints. With a lot of forthcoming capacity additions and new pipe, the market may see some of the strain ease.

“There seems to be a divergence in Northeast points between those that don’t have gas and need it and those that are plugged into the Marcellus,” said Harrison. “At points like Algonquin Citygate you see a huge premium to the Hub, whereas, at points like Dominion, you are seeing negative basis on the order of about $1.25 or more.”

Since the beginning of the year, the 2015 Forward Look fixed price average at Dominion has moved downward with the Henry Hub falling from $3.141 on Jan. 2 to $2.736 on Sept. 10. Highlighting the Northeast divergence, however, is the 2015 average fixed price at Algonquin Citygate, which has actually risen from $7.414 to $8.456.

Furthering the divide are expectations from the EIA in its Drilling Productivity Report, most recently released on Monday Sept. 8, which said production in the Marcellus Shale is expected to surpass 16 Bcf/d in October. The EIA cited “rapid natural gas production growth from the Marcellus” as a reason for the depressed prices in the forward market at locations that this new gas was able to reach. In the meantime, the rest of the Northeast must look to forthcoming capacity increases and pipeline expansions for sources of some relief.