Natural gas futures jumped as much as 10 cents to start the week, supported by a steep drop in production ahead of two tropical systems moving through the Gulf of Mexico (GOM). The September Nymex gas futures contract surged to a $2.554 intraday high before settling Monday at $2.513, up 6.5 cents from Friday’s close. October jumped 4.3 cents to $2.616. 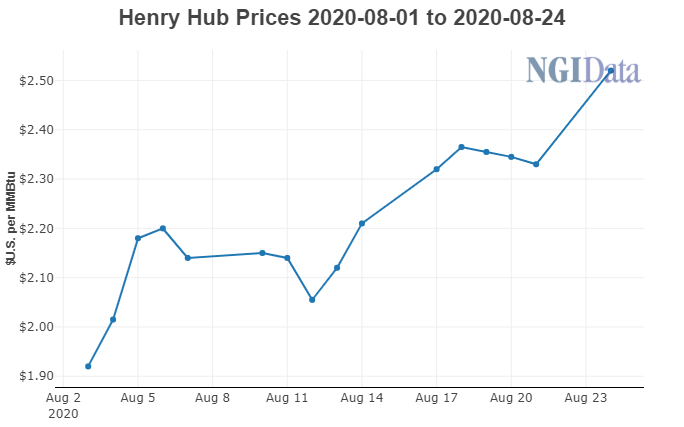 Market chatter on Monday was all about the pair of tropical weather systems churning in the GOM, with exploration and production companies evacuating personnel and shutting in production ahead of the storms. Refineries and petrochemical complexes along the Gulf Coast also were shuttering some operations, including Valero Energy Corp., ExxonMobil, LyondelBasell and Motiva Enterprises LLC.

The Bureau of Safety and Environmental Enforcement (BSEE) said based on a survey of 37 exploration and production company reports as of midday Monday, personnel had been evacuated from 281 GOM production platforms, representing nearly 44% of the 643 manned platforms. Personnel also had been evacuated from six nondynamically positioned rigs, equal to 60% of the 10 rigs in operation. Another 11 dynamically positioned rigs were moved off location as a precaution, representing 68% of the 16 in operation in the offshore, according to the BSEE.

BSEE estimated that about 82% of the current oil production and 57% of the natural gas production in the GOM had been shut-in.

Genscape Inc., meanwhile, said since last Thursday (Aug. 20), GOM gas production had declined to 0.25 Bcf/d, down from 1.33 Bcf/d. Receipts have dropped off significantly on pipelines including Destin (minus 275 MMcf/d), Discovery Gas Transmission (minus 250 MMcf/d), Mississippi Canyon (minus 213 MMcf/d), Nautilus (minus 260 MMcf/d), Transcontinental (minus 206 MMcf/d) and, to a smaller extent, on Sea Robin (minus 107 MMcf/d).

“For now, the market is latching on to the production side of the story,” said Bespoke Weather Services. “We think there are enough bearish risks associated with this storm that the rally is just getting out of hand, even with production lower, but again, this is a tricky situation with a lot of moving parts, so confidence is lower.”

Tropical Storm (TS) Marco fell apart as it approached the southeastern Louisiana coast Monday, but TS Laura was expected to strengthen into at least a Category 2 hurricane prior to washing ashore near the Texas/Louisiana border on Thursday.

In a 1 p.m. CT update, the National Hurricane Center (NHC) said on the forecast track, Laura would move over into the southeastern GOM overnight Monday and cross the central and northwestern GOM Tuesday night into Wednesday. It then was expected to approach the northwestern coast Wednesday night, according to the NHC.

Laura was packing maximum sustained winds near 60 mph, “but strengthening is expected.”

The impact of hurricanes is complex, analysts pointed out, and the market may underestimate the potential loss of production. Marco alone would have had only limited impact. However, with Laura trailing by only 48-60 hours, most GOM gas production could be shut-in for nearly a week, knocking up to 15 Bcf offline, EBW Analytics Group said. Heavy rains could also flood processing plants, significantly magnifying lost production. Most coastal facilities are hardened for storms, however.

While some of that production loss is likely to be partially offset by the impact of heavy rains on power sector demand, it’s also important to consider the impacts if the Sabine Pass or Cameron liquefied natural gas (LNG) terminals were to take a direct hit.

Cameron LNG is designed to withstand a Category 5 hurricane, and personnel safety is foremost when preparing for a storm, according to spokeswoman Anya McInnis. The company’s phased approach in managing day-to-day operations include a shelter in place when winds approach 45 mph and include provisions for 183 mph winds, heavy rains and storm tides, or flooding. Cameron also has procedures in place to assess and recover from the impact of any event, to ensure a safe and effective restart of operations, according to McInnis.

Although feed gas volumes to U.S. terminals held above 5 Bcf/d on Monday, there could be some delay in loading cargoes this week as the storm passes and rains subside, analysts said. This could limit further upside for prices, and the loss of demand could prompt a retreat ahead of the September contract’s expiration on Thursday.

However, a significant rise in LNG demand is still expected around the corner, with feed gas volumes potentially increasing by as much as 2 Bcf/d in September and even more sharply in October, when space heating demand also starts to increase, according to EBW.

“The potential for a strong rebound in LNG exports could be a game changer.”

If a meaningful recovery occurs, then cash prices could strengthen again before the end of September, the firm said. Furthermore, the storage surplus versus last year and the five-year average may rapidly decline, according to EBW, with the potential for an early end to the injection season. “In response, by October, natural gas prices could be well above current levels.”

Of course, there are still a couple of months of moderate weather to get through before the storage trajectory is a done deal. The latest outlooks show warm to hot conditions ruling much of the United States this week, except portions of the Upper Great Lakes and Northeast as well as areas where Marco and Laura are projected to bring clouds and heavy squalls, according to NatGasWeather.

Comfortable temperatures are forecast to return across the northern United States this weekend into next week, though heat is expected to remain in the southern states. NatGasWeather said the weather data attempts to build high pressure back across the eastern states Sept. 1-2 for a brief warm-up, although not quite as far into the East in the latest model run.

Spot gas prices posted widespread gains across the Lower 48 on Monday, aided in part by persistent heat out West, and warmer air moving into the eastern states. Gains were fairly uniform in the 20-plus-cent range, with prices in Southern California climbing 24.0 cents to $4.315.

In the Rockies, Northwest Sumas cash jumped 30.0 cents to $2.415 as maintenance farther upstream limited imports. Genscape said that work this week on Gas Transmission Northwest (GTN) would limit U.S. imports from Canada through Kingsgate, ID, by around 250-300 MMcf/d. Pig runs from Kingsgate to Rosalia, WA, scheduled for Tuesday-Friday, were to cut operating capacity for Kingsgate flows by 230 MMcf/d, to 2,005 MMcf/d from 2,235 MMcf/d.

“Flows here have averaged around 2,300 MMcf/d month to date, so this would translate to a flow cut of nearly 300 MMcf/d,” said Genscape analyst Joseph Bernardi. “Worth noting, however, is that flows have come in slightly above posted operating capacity levels to the tune of 62 MMcf/d this month, so there is potential for less than the roughly 300 MMcf/d cut to actualize.”