The U.S. Energy Information Administration (EIA) reported a withdrawal of 130 Bcf from natural gas storage for the week ended Jan. 1, much steeper than the pull a year earlier but slightly off market expectations. Nymex natural gas futures traded in a narrow range in the wake of the storage release. 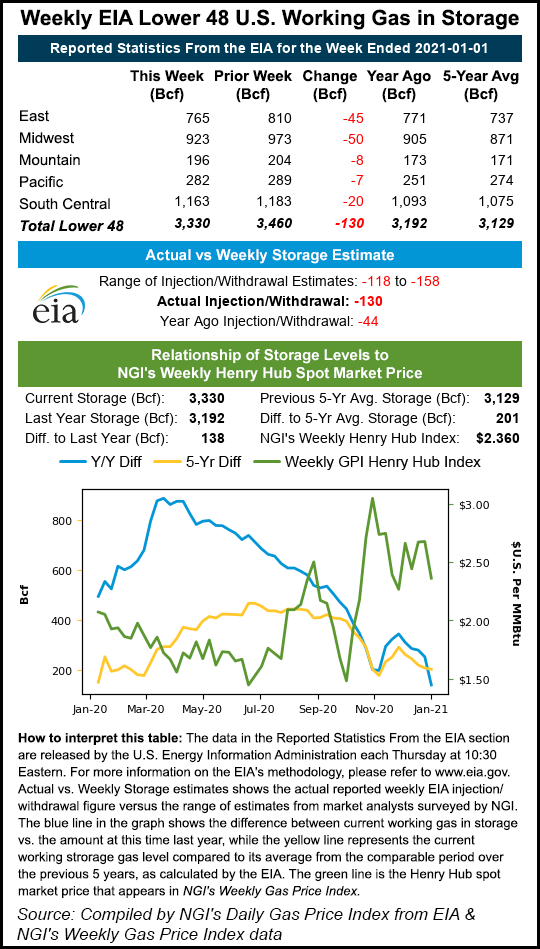 With the covered week bookended by the Monday after Christmas and New Year’s Day – and the still raging pandemic interrupting Americans’ daily rhythms in between — observers said it was an exceptionally difficult week for analysts to issue on-target estimates.

“The double whammy holiday is tricky,” said one participant on The Desk’s online energy platform Enelyst. “If you missed by 5 Bcf this week, all is forgiven.”

Prior to the report, a Bloomberg survey found estimates ranging from a pull of 124 Bcf to a decrease of 146 Bcf, with a median of a 138 Bcf decline in stockpiles. A Reuters poll found withdrawal estimates spanning from 118 Bcf to 158 Bcf and a median estimate of a 135 Bcf decline.

A Wall Street Journal poll, meanwhile, landed at an average pull of 137 Bcf, though estimates ranged from a decrease of 119 Bcf to a decline of 158 Bcf.

NatGasWeather said “it was warmer than normal over much of the country besides the interior West and portions of the Southeast” during the covered week.

However, it was colder over much of the country last week than it was the week before, leading to increased week/week heating demand.

Energy Aspects estimated a nearly 15% increase in heating degree days for the covered period, driving an estimated 4.8 Bcf/d week/week rise in residential/commercial demand.  On the supply side, the firm estimated production at 91.3 Bcf/d as of year-end 2020, 0.8 Bcf/d higher month/month. However, production as of last week was down 1.0 Bcf/d from recent highs, including a 0.6 Bcf/d week/week drop in output from Appalachia, the firm said.

The latest withdrawal reduced inventories to 3,330 Bcf, though stockpiles were still above the year-earlier level of 3,192 Bcf and above the five-year average of 3,129 Bcf.

By region, the Midwest and East led with pulls of 50 Bcf and 45 Bcf, respectively. The South Central followed with a withdrawal of 20 Bcf that included a 19 Bcf pull from nonsalt facilities and a 1 Bcf decrease in salts. Mountain region stocks declined by 8 Bcf, while Pacific inventories fell by 7 Bcf.

The EIA results point to “a loose-ish supply/demand balance, though with holiday impact, there is not much we believe should be read into this,” Bespoke Weather Services said. “We do think the balance will tighten somewhat as we move forward, but it is the weather that will be the ultimate driver of prices over the next few weeks.”