Natural gas futures bulls hoping for a strong finish for the October contract on its last day of trading Thursday had those hopes dashed by a very bearish surprise from the latest government storage report. After trading as low as $2.390/MMBtu, the October Nymex contract rolled off the board at $2.428, down 7.4 cents. The November contract lost 7.5 cents to settle at $2.443. 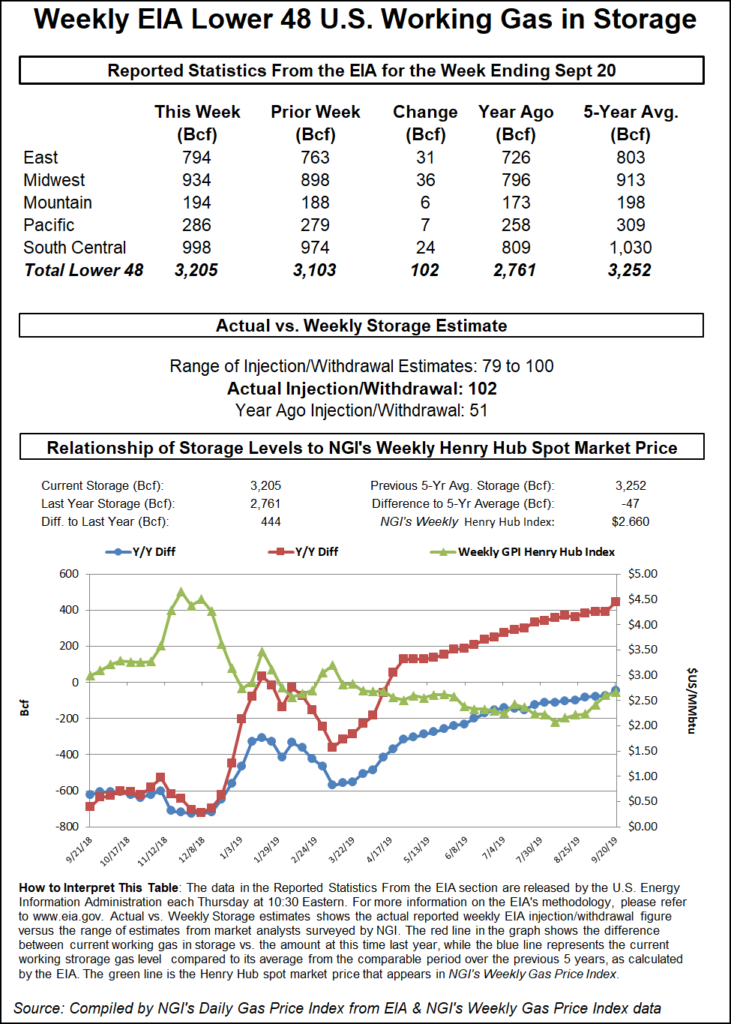 Futures had pushed a few cents higher in early trading Thursday, but any hint of a rally on the day was soon snuffed out once the Energy Information Administration (EIA) reported a whopping 102 Bcf weekly injection into U.S. natural gas stocks, a figure that topped even the highest estimates among market observers.

The 102 Bcf injection, recorded for the week ended Sept. 20, exactly doubles the 51 Bcf build EIA recorded in the year-ago period. It also easily tops the 74 Bcf five-year average. Prior to the report, major surveys had pointed to a build in the neighborhood of 89-92 Bcf, with responses ranging from 79 Bcf up to 100 Bcf. NGI’s model had predicted a 90 Bcf injection.

The 102 Bcf number was met with surprised reactions on Enelyst, an energy-focused chat platform. Participants in the weekly gas storage chat remarked on surprisingly large injections in the East, South Central and Pacific regions for the week.

By region, the Midwest injected 36 Bcf for the week, while the East injected 31 Bcf. The Pacific region refilled 7 Bcf, while 6 Bcf was injected in the Mountain region. EIA recorded a 24 Bcf injection in the South Central region, including 16 Bcf into nonsalt stocks and 7 Bcf into salt.

“One thing I hadn’t considered in South Central storage is how much extra utilization may come from people who anticipate rising prices from the additional takeaway coming on,” NGI’s markets analyst Nathan Harrison said during the Enelyst chat. “If you expect prices will rise because of the timeline of takeaway projects and increased liquefied natural gas exports, you might store more gas than if you expected prices to remain steady.”

Genscape Inc. analyst Eric Fell pointed to “more production” as the likely culprit behind the high-side injection, along with “weak” industrial demand. “Most industrial demand is hidden,” he told the other Enelyst participants. “Most of the production growth is behind intrastate systems as well and very hard to track.”

Not including weather-related demand, the 102 Bcf injection implied the market was 3.3 Bcf/d looser versus the same week last year, according to analysts at Raymond James & Associates. Over the past four weeks, the market has averaged 1.4 Bcf/d looser, they said.

Meanwhile, the mid-day Global Forecast System (GFS) data maintained the higher degree day projections that had shown up overnight ahead of Thursday’s trading, according to NatGasWeather.

The GFS increased demand expectations by “favoring stronger cool shots into the northern United States, notably the important Northeast,” the forecaster said. “This is where the latest GFS was again more aggressive advancing stronger cooling into the United States than the European model.”

Still, after Thursday’s “hefty” 102 Bcf injection, and with “next week likely to be closer to 110 Bcf, the markets could” shrug off the added weather-driven demand, as production “is proving to be much too strong” for higher degree day totals to overcome, NatGasWeather said.

A shoulder-season contrast of unusually chilly conditions over western regions of the Lower 48 and warmer-than-normal conditions farther east had spot prices going south Thursday. While Henry Hub held steady at $2.510, most pricing hubs finished lower on the day.

The National Weather Service (NWS) highlighted a “battle of the seasons” in its short-range forecast Thursday, predicting “huge temperature contrasts across the nation” for Friday and into the weekend.

The below-normal temperature forecast for the western United States did little to increase natural gas demand expectations in the Rockies and California, which posted some of the largest discounts on the day. Opal dropped 18.5 cents to $2.195, while Northwest Sumas fell 15.5 cents to $2.210.

Overall, Lower 48 demand is set to grow over the next week, driven by warm temperatures in the East, South Central and Midwest, according to Genscape Inc. As of Thursday, the firm was modeling Lower 48 demand of 71.0 Bcf/d over the next seven days, 3.5 Bcf/d higher week/week and 0.2 Bcf/d more than the year-ago period.

The Pacific is forecast to see a 1.2 Bcf/d drop in power demand over the next seven days, according to Margolin.

Despite the hot forecast, price hubs from Texas and the Midcontinent to the Southeast generally saw modest discounts Thursday. Transco Zone 4 averaged $2.490, down 3.0 cents.

The Central and Southern Plains, along with areas to the east can expect “summer weather” to “continue to dominate into the first weekend of fall,” according to the NWS. “Widespread much above-average temperatures are expected across these areas, with the beginning of a stretch of potentially record-high temperatures lasting into next week for areas from the Southeast, Tennessee Valley, Ohio Valley and Mid-Atlantic.”