Natural gas forwards markets tacked on another 20 cents on average between June 3 and 9 as market players were thrown by this week’s reported storage injection from the U.S. Energy Information Administration, according to NGI’s Forward Look. 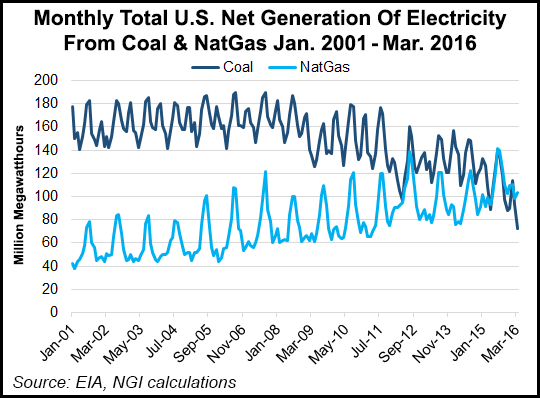 The 65 Bcf build into inventories for the week ending June 3 was far below market consensus of 78 Bcf, indicating a tightening supply-demand picture for natural gas.

The Nymex July contract was up about 22 cents during that time, settling Thursday at $2.617, but was on track Friday to give back some of those gains. The prompt-month contract was down about 5 cents by mid-day Friday.

Furthermore, the arrival of any relatively strong heat could easily bring builds that could be as small as single digits, the weather agency said.

“This highlights supplies are going to be very slow to increase during July and August as long as production remains at current suppressed levels,” NatGasWeather said.

Indeed, the warmer temperatures last week that boosted power demand coincided with a variety of maintenance-induced production disruptions, according to Genscape, which had pegged the storage injection at 74 Bcf.

“There may also be more production offline than expected due to flooding on intrastate systems in Texas that are not visible via pipeline nominations,” said Genscape’s Rick Margolin, senior natural gas analyst.

Meanwhile, weather guidance continues to offer no clear indication of where prices will go from here, Bespoke Weather Services said.

“We see American guidance that medium-term cool could present an opportunity for prices to fall back, while international guidance looks bullish enough to potentially carry the July contract up towards $2.70,” Bespoke said.

The July contract has surged more than 20% in less than two weeks.

“It’s difficult to say what’s now fair price after such a strong move, but certainly hotter temperatures showing up in the weather maps and smaller builds year on year and versus the five-year average have provided support the past few weeks,” NatGasWeather said.

Last week, analysts at Societe Generale worried that the swift upswing in prices could put displacement at risk, especially before the core of the summer season got into full swing.

This week, we’re learning those concerns are warranted.

Genscape’s proprietary power burn model shows coal has been making up lost ground in the coal-to-gas ratio in recent weeks, despite summer-to-date having generally trended in favor of gas.

“This summer-to-date, the coal-to-gas ratio has been averaging 1.15, about 22% tighter than last summer-to-date’s 1.48 average,” Genscape said.

During the previous three summers-to-date, the ratio averaged 1.83 coal-to-gas.

In the last two weeks, however, the ratio has been gradually ticking back up toward coal.

“Since May 15, however, the ratio in favor of coal has been increasing to the most recent recordings of 1.33, a summer-to-date high. Both the EIA East and South Central regions are seeing recent increases that are driving their respective ratios back to last summer’s same-date levels,” Genscape said.

Indeed, Societe Generale maintains its stance that the recent uplift in natural gas prices is a bit premature and remains concerned what these higher June spot and July contract prices are going to do to gas generation over the next few weeks once temperatures migrate back toward something less supportive.

“Obviously, a sustained hot summer weather scenario reduces the risk that a rise in price might bring, but weather is a wildcard,” said Breanne Dougherty, an analyst at Societe Generale.

Dougherty said they will be watching generation loads closely over the next 15 days to see how the shift up in price, and the expected softening of the relative CDD strength, impacts them.

“Bottom line is we see generation load performance this summer as being a fine balance of price and CDD support, the loss of either has the potential to quickly alter relative load strength, and because there is limited elasticity in other segments of summer gas balances, the impact on the injection pace could be material.

“We like what we are seeing thus far, but are still wary of how challenging it will be to hold these metrics going forward,” Dougherty said.

Double-digit price increases were seen across the curve.

The Nymex August contract rose about 21 cents, as did the balance of summer (August-October). The prompt winter jumped 20 cents, while the winter 2017-2018 was up just 5 cents.

Nationally, similar increases were seen as prices were up an average 20 cents for July, 20 cents for August and 19 cents for the balance of summer, Forward Look data shows.

“The curves have more room to climb in our opinion, but prudence suggests protecting secured bank capacity,” said analysts at investment bank Jefferies, which projects natural gas prices to average $3.50 in 2017 and $4 in 2018 and beyond.

The bank said that with prices for the calendar year 2017 now averaging around $3.10, it expected to see producer hedge additions from very low levels.

“Limited gas price hedging for 2017 is neither surprising nor illogical given that previously low prices did not support returns or bank lending protection for most,” Jefferies said. “We think today’s curve still doesn’t justify much of an increase in activity (particularly with front month of about $2.50 per MMBtu), but has the wide appeal of enhancing bank credit.”