With an unusually cold April fading into memory and minimal weather catalysts expected over the month ahead, May natural gas bidweek traders were left to ponder the impact of a belated start to the injection season on a well-supplied market. 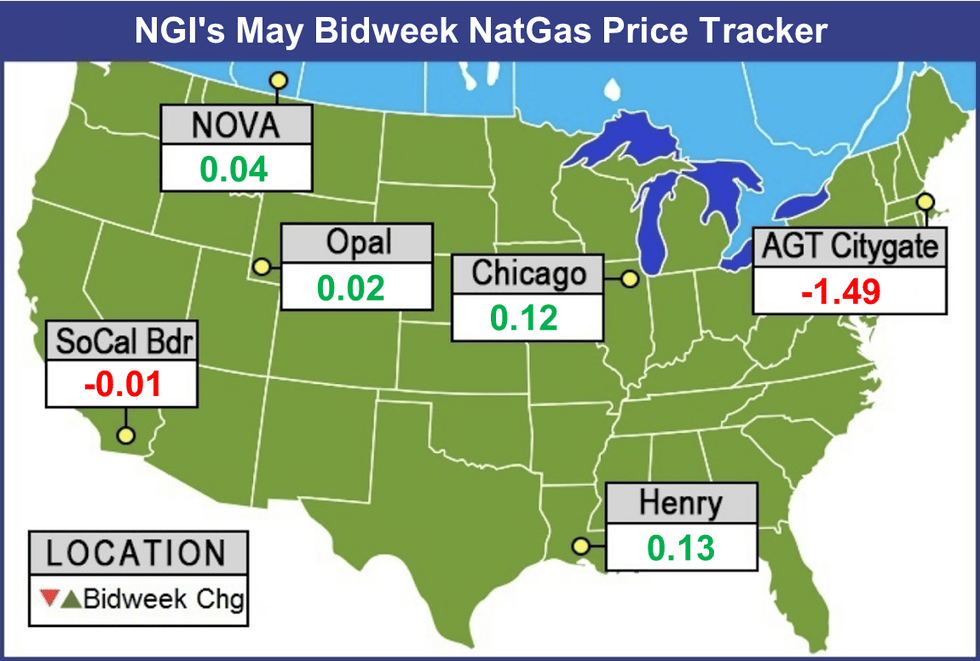 Moderation in the Northeast countered gains of around a dime or more through much of the Gulf Coast and Midwest, and the NGI National Bidweek Average headed into the heart of the shoulder season a nickel higher at $2.41/MMBtu.

It was a cold April, to be sure, cold enough to postpone the start of injections by about three weeks and set up a true test of the supposition that surging production will make up for a year-on-five-year storage deficit that had ballooned to more than 500 Bcf as of the week ending April 20.

“This has been the coldest April in 35 years, adding more than 175 Bcf of demand for natural gas,” EBW Analytics Group CEO Andy Weissman said in a recent note to clients. “Notably, however, despite record demand, the June contract never closed above $2.821/MMBtu and relinquished” its gains for April late during the last week of the month.

“This weak performance is a sign of the strength of bearish sentiment. Over the next three weeks, weather-driven demand will fall to its lowest point of the year, potentially leading to record injections. As this occurs, the June gas contract is likely to drop to $2.61-2.68 — if not lower.”

“Closing the book on April, our preliminary estimate of demand shows this April set a five-year high at an average of 69.7 Bcf/d…a 20% gain to April 2017 and about 16% above the prior five-year April average,” Margolin said. “Structural growth in the residential/commercial sector was accentuated by what may be determined to be the coldest April on record.

With April cold forecast to give way to more seasonal weather for the month of May, Northeast bidweek prices pulled back, led by volatile New England points. Algonquin Citygate shed $1.49 to average $2.65, with Tennessee Zone 6 200L similarly tumbling $1.51 to $2.70.

The previous month’s cold produced consecutive storage draws that beat market expectations to the bullish side while coming in much tighter than recent norms.

In what was likely the last reported withdrawal before injection season, another tight Energy Information Administration (EIA) storage report during the last week of April helped lift the May contract into expiry.

The same day EIA’s report showed the year-on-five-year deficit widening to 527 Bcf, May rolled off the board 3.5 cents higher at $2.821, settling above the previous front-month high of $2.811 set March 13. The positive finish for the May contract saw Henry Hub bidweek prices finish 13 cents higher at $2.82, setting the tone for bidweek gains of around 10-15 cents throughout much of Louisiana, Texas and the Midwest.

“EIA data the past few weeks has been quite bullish, as we have seen a market that is generally tighter than expected,” Bespoke Weather Services said in a recent note to clients. “This comes even as data shows production growth and relatively limited nuclear outages, which would tend to loosen prices further.

“We would expect those trends to become more apparent” in data during the first week of May, “though it may take a couple more weeks for the data to become very apparent, when we see at least a couple 100 Bcf-plus builds,” Bespoke said. “Storage levels remain far below seasonal averages, which will keep a bid under prices at the front of the strip, but we would expect loosening balances from here through May.”

EBW’s Weissman similarly called for EIA to begin reporting an “extended string” of triple-digit injections, potentially starting around the second week of May.

“Despite continued much-colder-than-normal weather” through the last full week of April, “weather-driven demand has fallen by nearly 20 Bcf/d since the end of March,” Weissman said. “With more seasonal weather about to return to the eastern U.S., this downward trend is likely to continue for at least the next three to four weeks.” Consecutive triple-digit injections will begin to “rapidly pare down the storage deficit versus the five-year average.”

A lack of bullish catalysts prior to the start of summer cooling season could see futures test $2.60 “if not lower,” according to Weissman.

The underlying driver of bearish sentiment in the natural gas market has been surging production — up significantly year/year and approaching 80 Bcf/d by some estimates — and the prospect of more to come.

The overall picture for U.S. natural gas demand is healthy, they said, but the onshore supply surge, particularly from associated gas, should more than cancel out strong demand growth, and a lower price is needed to balance the market over the long-term.

U.S. natural gas production is poised to continue growing “at relatively low price levels” over the next two years because of associated gas growth from the Permian and other oil-focused plays, pipeline buildout in the Northeast and growth from the resurgent Haynesville Shale. Combined, this points to a projected 13 Bcf/d of incremental gas production through 2018 and 2019, according to the analysts.

The Permian alone is expected to account for 5.3 Bcf/d of growth over that time frame, according to Adkins and Molchanov.

As production grows, signs of takeaway constraints have emerged in Permian basis differentials, including some recent spot price lows at the Waha hub not seen since the late 1990s. The negative differentials to Henry Hub showed up in bidweek trading as well, as Waha averaged $1.35, up 7 cents, while El Paso Permian added a penny to $1.27.

The constraints in the Permian are a potential wild card for natural gas prices, according to Adkins and Molchanov.

“If near-term gas demand in Mexico does not step up, Permian producers may resort to flaring gas at rates comparable to — or even exceeding — that of the Bakken pre-2014,” they said. “Above and beyond the regulatory question marks, such a scenario strikes us as unlikely, as there are several proposed Permian gas pipeline projects with up to 4 Bcf/d of combined capacity to come online as early as mid-2019…Any Permian gas constraints would be incrementally bullish for gas prices.”

Another wild card is the extent of Northeast production growth as new pipelines come online.

“We anticipate 5 Bcf/d of planned un-risked takeaway capacity to come online in 2018, followed by 3 Bcf/d in 2019,” Adkins and Molchanov said. “With all but one of these pipeline contracts fully subscribed, shippers should be incentivized to fill as much new capacity as possible,” suggesting “upside for even our robust Appalachian production outlook in 2018 and beyond.

“…That said, it is unlikely that Marcellus/Utica takeaway capacity” fills completely as “some legacy pipelines will run at slightly lower utilization rates.”

Sticking with the theme of production, producers in Western Canada could have a tough month, as NOVA/AECO C bidweek prices plummeted C92 cents to average C67 cents/GJ.

“The natural gas basis markets have been anticipating the battle for May AECO for more than six months,” Energy GPS said. “Back in the fall, Nova Gas Transmission posted a preliminary outage schedule for the summer 2018 injection season that indicated a large number of restrictions. The cuts in capacity throughout Alberta were expected to reduce the access to storage caverns.

“…Without the ability to inject, prices had to fall to a level where production was incentivized to shut in,” the firm said. “…The beat down of AECO gas is just beginning.” Temperatures in Calgary through the first week of May were expected to climb, reducing provincial demand and creating “an extra .6 Bcf/d of supply on the system that will need to be rebalanced,” meaning cash prices are likely to remain depressed.