Only four days in, and August is full of surprises – this time a whopper of a storage report that sent natural gas futures tumbling as much as 44 cents lower day/day. Bulls bought the dip, however, and the September Nymex gas futures contract settled Thursday at $8.122/MMBtu, off only 14.4 cents from Wednesday’s close. 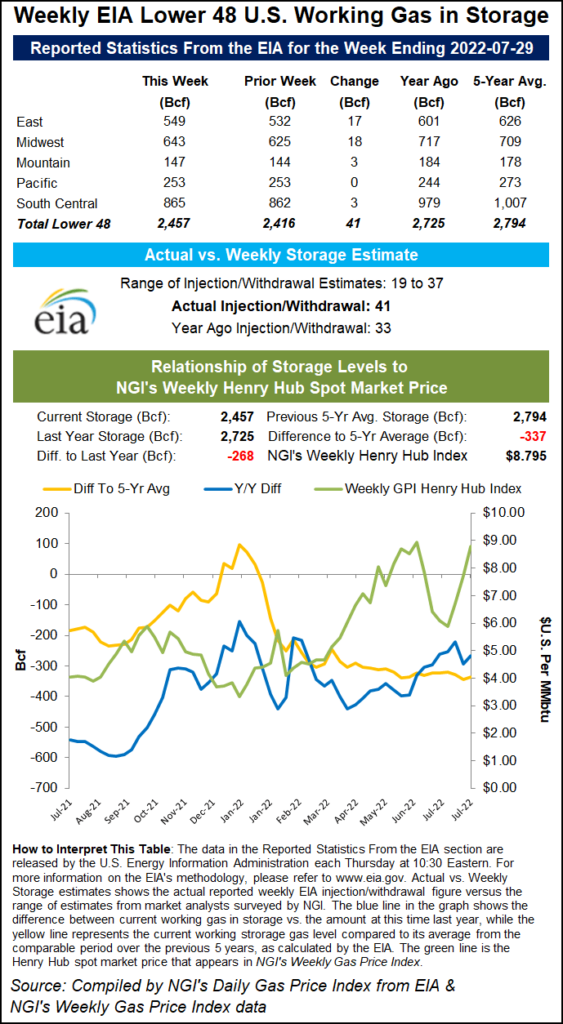 Barely catching a breath after Freeport LNG announced it had reached an agreement with federal regulators on initial operations at the liquefied natural gas export facility, traders got word early Thursday that U.S. storage levels had grown by more than they expected.

The Energy Information Administration (EIA) said inventories for the week ending July 29 rose by 41 Bcf, seemingly easing some concerns about supply given the possibility of Freeport’s return in October.

“After a few tight numbers, I see this one 1.5 Bcf/d loose versus last year,” said managing director Het Shah of The Desk’s online chat Enelyst. “Most of my miss was in the South Central salt. I was expecting salt to draw,” but it “came in flat.”

South Central salt stocks ended the period unchanged at 195 Bcf, while nonsalts added 4 Bcf to lift stocks to 671 Bcf, according to EIA. Midwest inventories rose by 18 Bcf, while East stocks increased by 17 Bcf. Mountain storage levels were up 3 Bcf, and the Pacific region stayed flat on the week.

The 41 Bcf injection compares with the year-earlier injection of 16 Bcf. The five-year average for the week is a build of 35 Bcf, according to EIA.

Enelyst participants questioned whether production was higher than the 97 Bcf/d levels recently observed in the market. In particular, there were questions about whether Appalachia producers were ramping up amid the bursts of heat sweeping through the region. In addition, one of the trains at the Sabine Pass LNG terminal was out of commission most of last week, which made more gas available to be injected into storage.

That “really impacted Henry Hub cash, and salt injected because of it,” said an Enelyst participant.

Regardless of the latest storage injection, supplies remain precariously light more than halfway through the injection season.

Freeport’s plan to return all three liquefaction trains, two LNG storage tanks and one LNG loading dock as part of “initial operations” in October would add another 2 Bcf/d of demand to a market that has struggled to rebuild stocks this summer. Searing heat since June has largely negated any potential benefits the market thought Freeport’s outage would bring to the supply picture.

Some market observers had expected a slower ramp of Freeport operations, with a staged approach offering a bit of wiggle room for storage inventories to refill a bit more ahead of winter.

Tudor, Pickering, Holt & Co. (TPH) said it had expected trains coming on in a staged fashion in October, November and December. Assuming Freeport achieves the targeted 2 Bcf/d of feed gas in early October, the firm’s prior end-of-season forecast of around 3.35 Tcf would edge lower toward 3.3 Tcf.

This would further upsize the risk profile for this upcoming winter, but it’s “not a game changer” given the restart is still expected for early October, according to the TPH team.

That said, the timing of Freeport’s potential return coincides with the official start of winter for the gas market. Any significant cold in November could lead to meaningful withdrawals compared to historical levels. Already, some analysts see an increased likelihood that stocks at the end of March may fall below 1 Tcf given the latest Freeport news.

That means production is likely to become even more closely scrutinized. Though a slew of maintenance activities has prevented higher production levels from being sustained since the spring, TPH analysts said output has managed to hold near 98 Bcf/d in recent days.

“There are mixed indications on the primary drivers based on various data sources, but our spidey senses suggest the Permian Basin as a key contributor,” the analysts said.

East Daley Capital Advisors Inc. also has noted strong volumes from the Permian. Overall, it said July dry gas production averaged 96.8 Bcf/d and it expects output to continue ramping through the remainder of 2022. It is forecasting production exiting the year at 101.3 Bcf/d. This is 4.7 Bcf/d above EIA’s projections.

The ramp from July to December can be attributed to the ArkLaTex, Northeast and Permian increasing 1.2 Bcf/d, 1.3 Bcf/d, and 1 Bcf/d, respectively, according to East Daley.

“The question is, can they get that gas out,” said East Daley’s Zack Van Everen, senior capital markets analyst.

Van Everen was a guest commentator on Enelyst Thursday. On the chat, he said midstream companies have responded with various expansions. Kinder Morgan Inc., for example, is expanding the Permian Highway Pipeline and may boost capacity on Gulf Coast Express.

An expansion of DT Midstream Inc.’s Louisiana Energy Access Project, or LEAP, is underway, with capacity set to climb to 1.7 Bcf/d, or by 70%. The pipeline is a 150-mile, 36-inch diameter system that now moves about 1 Bcf/d of Haynesville Shale supply in Louisiana to the Gulf Coast for industrial use and LNG exports.

“But the basin remains tight and will need more expansions to meet growing LNG demand in the outer years,” Van Everen said.

The National Weather Service (NWS) said the most intense heat would be in the northern Rockies, with potentially record-breaking high temperatures in the upper 90s and 100s in the forecast.

The heat in the Northwest, paired with windy and dry conditions, would contribute to fire concerns across portions of Montana through Friday, according to NWS.

Oppressive heat was set to continue across most of the Lower 48 for a few more days. AccuWeather said the mercury could flirt with the 100-degree mark in some major cities on the East Coast, with highs approaching many of the benchmarks that were set during a prolonged heat wave in late July. The strongest heat wave was expected in New England and upstate New York, where new marks for the highest temperatures of the year are likely to be set.

The temperature in Albany, NY, for example, has reached as high as 97 degrees on multiple days in July. “Not only would the forecast high of 98 on Thursday surpass that mark, it would also tie the daily record of 98 set in 1955,” AccuWeather meteorologist Ryan Adamson said.

Hartford, CT, is expected to soar to 99 degrees, a mark that would surpass the top high temp there this year — 97 degrees on July 20 — and easily best the daily record of 96 degrees set in 1944. The average high in Hartford at this time of year is 84, Adamson said.

Heavy rains expected by the weekend should cool temperatures down, but AccuWeather warned that additional heat waves could follow later this month and into the fall.

Meanwhile, forecasters are warning that the peak of the Atlantic hurricane season is getting underway, despite the lack of activity currently. Atmospheric and oceanic conditions still favor an above-normal 2022 hurricane season, according to an annual mid-season update issued Thursday by NWS’ Climate Prediction Center.

National Oceanic and Atmospheric Administration (NOAA) forecasters have slightly decreased the likelihood of an above-normal Atlantic hurricane season to 60%, down from a 65% chance predicted in May. The likelihood of near-normal activity has risen to 30%, and the chances remain at 10% for a below-normal season.

“We’re just getting into the peak months of August through October for hurricane development, and we anticipate that more storms are on the way,” said NOAA administrator Rick Spinrad.