Stone Energy Corp.’s first Utica Shale well in West Virginia’s Wetzel County had a peak five-day test rate of 30 MMcf/d, the company said, in yet another confirmation of the formation’s potential in the state, where multiple operators began testing it this year (see Shale Daily, March 26). 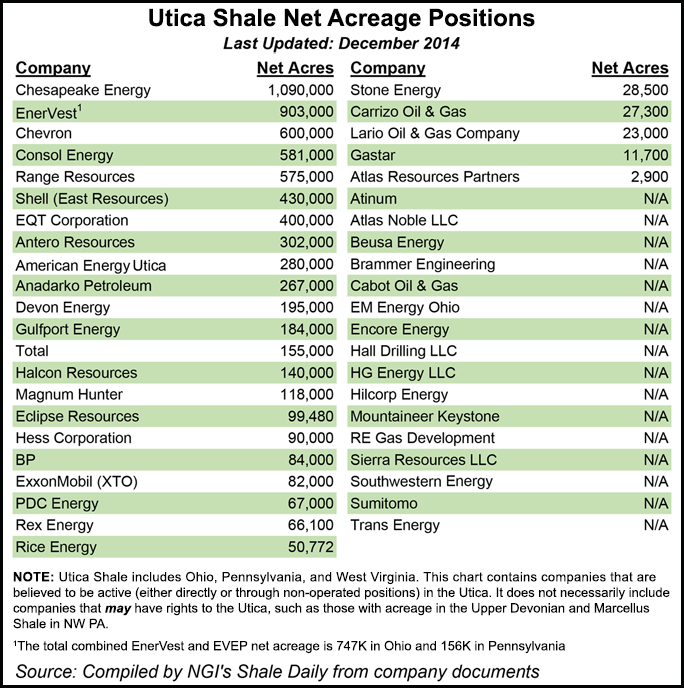 The well was drilled to a total depth of 11,350 feet, with just a 3,605-foot lateral from Stone’s Pribble Pad. Along with others either staked, spud or completed in the state this year, the pad has been closely watched by the industry (see Shale Daily, May 16). Louisiana-based Stone, which has about 90,000 Marcellus Shale acres under lease in West Virginia and Pennsylvania, said the test flow calculates to a rate of 8 MMcf/d per thousand feet of lateral, making it one of the best Utica Shale wells yet tested in the region.

“This well, along with the numerous third-party Utica tests surrounding our acreage, has significantly de-risked our Utica position,” said CEO David Welch. “We have already invested in land and infrastructure in this area due to our Marcellus Shale efforts, and this previous investment should enhance our Utica returns.”

The company has contracted a new dual-purpose rig, Welch added. With delivery expected late next year, Stone plans to begin developing its 30,000 acre Utica position as a result of the Pribble 6HU test.

Chevron Appalachia LLC has also tested its Conner 6H well at a rate of 25 MMcf/d in Marshall County (see Shale Daily, July 17). Antero Resources Corp., Chesapeake Energy Corp. and Cabot Oil & Gas Corp. are among other operators that have received permits to drill the Utica in West Virginia.