Stone Energy Corp.’s credit facility has been reduced from $500 million to $300 million, resulting in a borrowing base deficiency of $175.3 million, which could lead to a breach of its lending agreement and default, the company said. 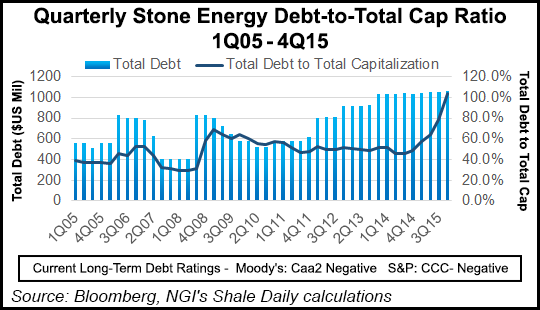 Stone’s bank group told the company of the redetermination on April 13. It has $457 million drawn on the credit facility and another $18.3 million of letters of credit outstanding resulting in the deficiency. Under the terms of its credit agreement, Stone has 30 days to decide if it will repay the loan to eliminate the deficit, add additional collateral to eliminate the shortfall or pay it in six equal monthly installments.

Stone did not say which option it might choose. The company said in March that given its debt and low commodity prices, a breach of its lending agreements was possible (see Shale Daily, March 15). In that case, lenders could accelerate its debt obligations. Stone said at the time that it was negotiating a waiver or amendment with its bank lenders.

It has also hired Lazard Ltd. as its financial adviser and Latham & Watkins LLP as a legal adviser to help it explore alternative financing and strategic alternatives, including assets sales and debt restructuring. Stone said it had cash on hand of $360 million as of April 13.

Late last year, the company said low commodity prices and negative differentials forced it to shut in its largest Appalachian asset, the Mary Field in West Virginia (see Shale Daily, Dec. 22, 2015; Sept. 25, 2015). That led to 100 MMcfe/d of 2015 curtailments and the company plans to keep the field shut in throughout 2016, when it intends to spend nearly all of its $200 million capital budget in the GOM. With the Mary Field shut in for the first quarter, the company said its other Appalachian fields produced just 23 MMcfe/d.

Stone expects to complete the first well for its Pompano platform drilling program by next month. After that, the company said it would decide what to do with the platform rig due to 2016 spending constraints. It has already farmed out its ENSCO 8503 deepwater drilling rig to a third party, with plans for another farm-out that would start in mid-May and keep it tied up through the summer. Between those farm-outs, Stone said it would utilize the rig to begin drilling the top section of its GOM Lamprey prospect.