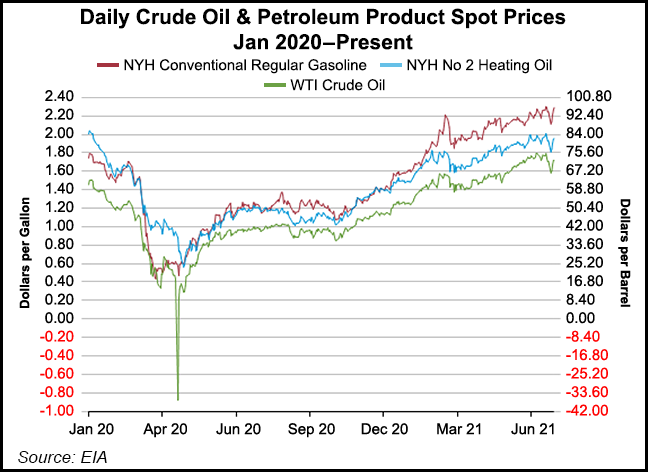 Total products supplied – the agency’s terminology for consumption — averaged 20.6 million b/d over the past four weeks, up 13% from the same period last year. In that time, gasoline demand averaged 9.5 million b/d, up 9% from a year earlier, while jet fuel consumption surged 39% to 1.5 million b/d, EIA said.

Distillate fuel products supplied averaged 3.8 million b/d over the past four weeks, up 13% from the same period last year, the agency reported.

At the same time, U.S. production declined. Output averaged 11.2 million b/d last week, down 200,000 b/d from the prior week. With domestic producers focused on cash flow and conservative spending, output remained well below the early 2020 peak of 13.1 million b/d reached just prior to the pandemic.

In the meantime, demand is also growing globally. While the Delta variant of the coronavirus threatens to hamper economic reopening efforts in parts of Asia, Europe and the United States, vaccination rollouts to date have proven effective. Forecasts look for greater oil consumption in the second half of 2021 and into next year.

Given that expectation and continued modest output in the United States, OPEC and an allied group of oil producers headed by Russia, aka OPEC-plus, inked a deal to further boost production through the end of the year and into 2022.

OPEC-plus is currently adding more than 2 million b/d into the global market. The latest deal, reached earlier this month, includes a plan to raise output by another 400,000 b/d each month from August to December, and likely well into next year until the cartel unwinds all of the cuts made previously in response to the pandemic in 2020. The cartel slashed output by 9.7 million b/d early last year after the coronavirus curtailed demand.

In a report this week, RBN Energy LLC said meager U.S. output and rising demand “make clear that the market needs OPEC-plus to continue the orderly unwinding of its production cuts.”