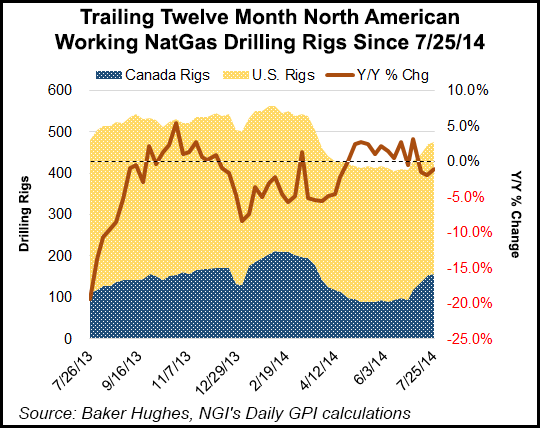 The company has an oil and gas portfolio that extends across North America’s onshore. The priority in the near term, however, is oil and liquids, Suttles said during a conference call to discuss second quarter performance. Between April and June, Encana’s oil and liquids production rose 43% year/year, while gas output fell 8%.

Even with a bundle of gas asset sales since Suttles revamped the company’s strategy late last year, Encana is not exiting the gas business. The company is the largest gas producer in Canada and one of the top natural gas independents in the United States.

“I always worry as we announced our strategy, and people could see it being implemented, that they would read it as we’re exiting the gas business, which is completely not the case. We have some real high-quality gas assets in our portfolio. But today, under today’s market conditions, we don’t think it’s the time to invest into those…

“We’ve also said we do see scenarios where gas price strengthens toward the back end of the decade. And areas like Haynesville Shale are incredibly well positioned to benefit from that.” Encana is one of the leading leaseholders in the gassy play.

The management team wants to “see a sustained stronger gas price than today’s price for us to go back into a significant drilling program,” said Suttles.

Encana “obviously enjoyed a nice benefit from a very cold winter,” he said. Gas production during the first quarter from the Deep Panuke platform offshore Nova Scotia sold for an average price of $19.14/Mcf into the spot market (see Daily GPI, May 13). The volumes contributed more than one-third of Encana’s operating cash flow in the first three months.

However, “our fundamental view has not changed,” said the CEO. “Obviously there is a lot of volatility today” in the gas and oil markets.

Executive Vice President Renee Zemljak, who runs the midstream, marketing and fundamentals division, reiterated Encana’s view on gas prices in North America. “Outside of extreme weather events,” she said, the gas price is expected to float between $3.50 and $4.50 over the long term.

The downward pressure on gas prices today “really has been caused from cooler-than-normal weather coming on at the same time we’re entering the peak summer season…” and as supply growth continues. “We’re not surprised seeing the pressure that we’re currently experiencing on the gas prices. But it doesn’t change our longer-term outlook on prices overall.”

“The upside that we’ve seen most recently…of course, is due to the increased geopolitical chaos that’s currently going on,” Zemljak said. “It’s hard to predict how long that’s going to continue to add upside to our prices…”