Weekly natural gas cash prices forged ahead as heat radiated across much of the Lower 48, keeping air conditioners humming. 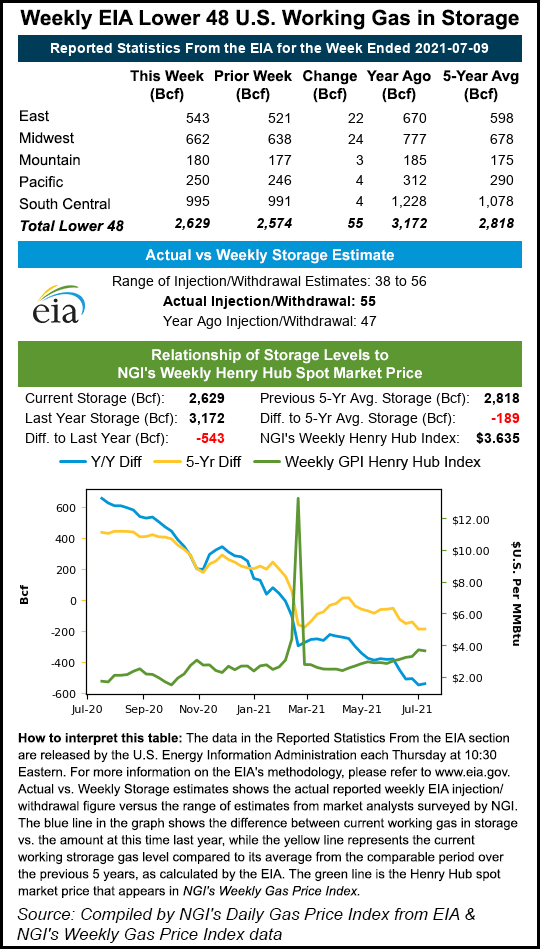 Demand was fueled during the week by hot upper high pressure that held over the East most of the week with highs of mid-80s to 90s. It was also hot over the West, Texas and the Plains, with highs ranging from the 90s to 110s, NatGasWeather said.

A weather system lingered over the Great Lakes and Ohio Valley with showers and highs of 70s to 80s, for locally lighter demand, but it was not enough to curb national momentum.

The August Nymex contract, meanwhile, settled at $3.674/MMBtu to close the trading week Friday. The prompt month finished Friday up 6.0 cents day/day but flat with the prior week’s close. Forecasts for lighter demand hampered futures much of the week.

National demand was expected to taper off by the start of the next trading week as rainy systems with comfortable highs in the 70s and low 80s moved East, NatGasWeather said. Heat was still expected in the West and in the Plains with highs of 90s to 100s – though not as intense as the record heat that scorched large swaths of the western United States in June and early July.

Additionally, widespread wildfires have forced evacuations across the West, polluted air and cast clouds of uncertainty over daily life and energy needs, fueling volatility in natural gas prices in July. Forecasters said that is bound to continue in the week ahead.

The National Interagency Fire Center said there were 70 active wildfires across a dozen states as of Friday.

Natural gas futures started the week with a gain on Monday but backtracked for three consecutive days after that – dragged lower by cooler tilts in weather forecasts for the back half of July and a relatively high storage injection.

For the rest of July, Bespoke Weather Services said, heat was expected to persist but come in below normal across most of the southern United States. Projected gas-weighted degree days for July as a whole were a relatively light 348. If that proves accurate, it would be the lowest July total since 2015 and well under last July’s total of 386, Bespoke said.

That outlook weighed down futures Tuesday and Wednesday.

U.S. liquefied natural gas (LNG) levels also have been uneven in July. LNG feed gas levels have at times topped 11 Bcf and approached record levels amid continued strong demand from Asia and Europe for U.S. exports of the super-chilled fuel. But other days, LNG volumes have dipped closer to 10 Bcf or below due to interruptions caused by maintenance work at export facilities.

The inconsistent LNG levels, coupled with moderately cooler temperatures to start July, contributed to a larger-than-expected build in underground storage. The U.S. Energy Information Administration (EIA) on Thursday reported an injection of 55 Bcf natural gas into storage for the week ended July 9.

Heat eased some during the covered period. The long Fourth of July weekend kicked off a short work week for many Americans, and this likely cut into industrial and commercial demand during the week. Wind generation also increased during the week, curbing natural gas consumption in some markets.

Prior to the report, major surveys pointed to a build in the upper 40s Bcf, in line with historical norms. NGI’s model estimated an injection of 39 Bcf. The actual 55 Bcf result topped the year-earlier increase of 47 Bcf and the five-year average 54 Bcf injection.

Analyst Shuya Li of Refinitiv said on The Desk’s online energy platform Enelyst that, despite the bearish print Thursday, concerns around storage are likely to focus on potential shortages. The build for the July 9 week lifted inventories to 2,629 Bcf. But that was well below the year-earlier level of 3,172 Bcf and the five-year average of 2,818 Bcf.

Li said production is expected to gradually climb in the second half of the year to help balance supply/demand ahead of winter. She estimated that output would rise from an average of 92 Bcf/d in June to about 94 Bcf/d by the start of the withdrawal season later this year.

“But winter risks are increasing if production doesn’t come back in time,” she said. Li said Refinitiv’s latest estimate put inventory at the end of October at 3.6 Tcf — about 10% less than the storage level last year.

Winter worries bubbled up on Friday, fueling a rebound in futures that brought the prompt month back even for the week.

Heat reigned over much of the country. Temperatures in the 90s continued to bake parts of the Great Plains and most of the West. There were triple-digit highs in the Southwest, including in Las Vegas and Phoenix, according to National Weather Service (NWS) data.

Highs in the 90s were found throughout much of the Northeast, as well, including New York City and Boston. However, a weather system that had brought moderate highs in the 70s to the Great Lakes was expected to push into the East and curb demand there by the start of the next trading week, NWS forecasts showed.

Against that backdrop, Northeast prices dropped and dragged down the national average.

Elsewhere, cash traded in mostly narrow ranges, though prices remained volatile in the West. Heat cooked much of the region. Dozens of wildfires also forced hundreds of evacuations that caused some residential and commercial demand interruptions and price retreats at key hubs.

On the pipeline front, Rockies Express Pipeline (REX) said it was dealing with an operational issue that was expected to limit westbound flows in Ohio starting Friday and continuing until further notice. The issue was tied to two units at the Chandlersville Compressor Station. REX idled both units.

Wood Mackenzie analyst Anthony Ferrara said, based on recent activity, “we could see flow cuts of up to 112 MMcf/d” while the two units are down.