Statoil ASA and its partners have hit pay in the Gulf of Mexico (GOM) deepwater at the Miocene Yeti discovery, another find in Walker Ridge. 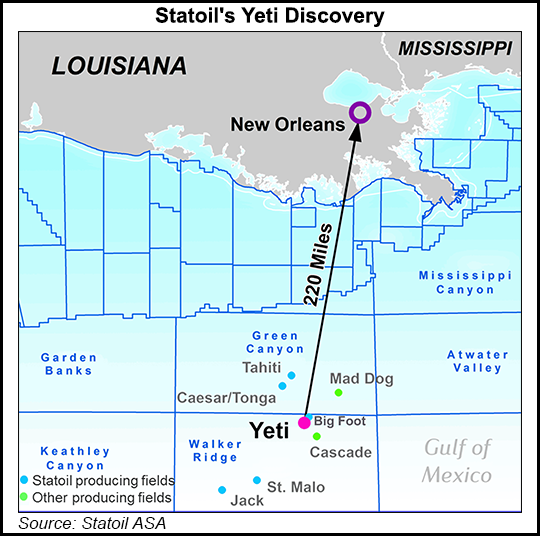 The Norwegian company operates and holds a half-stake in Yeti, about 220 miles south of New Orleans. Partners are Anadarko Petroleum Corp. (37.5%) and Samson Offshore (12.5%).

It’s still early days for the prospect. Statoil’s Jez Averty, senior vice president for exploration in North America, said the company is “analyzing data to determine the size of the discovery in order to consider future appraisal options.”

The Yeti discovery was made in Walker Ridge Block 160, which is about nine miles south of the Chevron Corp.-operated Big Foot field and seven miles from the BP plc’s Cascade prospect.

Chevron is preparing to ramp up production from Big Foot, considered one of the largest and deepest GOM discoveries to date. The San Ramon, CA-based supermajor and Statoil are partners in several deepwater projects in the GOM, including the Jack/St. Malo field in Walker Ridge and Stampede (see Daily GPI, Dec. 3, 2014; Oct. 30, 2014). All of the blocks making up Yeti were accessed by the current owners in recent years, Averty said.

Yeti, like many recent discoveries, is within the Lower Tertiary Trend, a red-hot area that continues to draw big investments from offshore operators, including the most recent Department of Interior offshore lease auction, held in March (see Daily GPI, March 18). In January, Chevron made another Lower Tertiary discovery at the Anchor prospect in Keathley Canyon (see Daily GPI, Jan. 6).