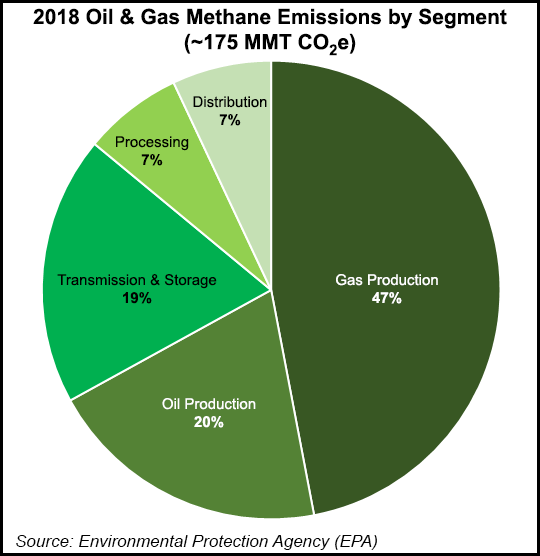 A coalition of state and city governments spearheaded by California’s attorney general (AG) has asked a federal court to review the Trump administration’s recent effort to roll back restrictions on methane emissions from oil and gas development.

The details of the rollback, which would see the Environmental Protection Agency (EPA) ease Obama-era emissions standards set for methane and volatile organic compounds emitted by the oil and natural gas sector, were published Monday in the Federal Register.

California AG Xavier Becerra, joined by officials from 19 other states, the District of Columbia (DC) and the cities of Denver and Chicago, wasted no time in filing a petition Monday. They asked the U.S. Court of Appeals for the DC Circuit to review the revised methane emissions rules.

Becerra’s office pointed to the EPA’s internal estimates that relaxing the Obama-era rules would increase methane emissions by 850,000 tons from 2021-2030, equivalent to 19 million metric tons of carbon dioxide.

“The West is on fire, the South floods, the Midwest gets ripped apart by super-tornadoes, and the East prepares for calamitous hurricanes,” Becerra said. “The Trump administration ignores the dire reality of the climate crisis at our peril. At this critical juncture in history, we need leaders who step up and propose solutions.

“Instead, we get President Trump’s version of the EPA. We won’t let the EPA gut critical pollution emissions standards and allow super pollutants like methane to destroy our atmosphere.”

The legal battle over the methane rules hardly comes as a surprise, with environmental advocates previously signaling their intent to oppose the EPA’s actions.

The challenge also comes as extraordinary wildfires linked to climate change have ravaged the West, garnering national headlines with the U.S. presidential election weeks away. Democratic presidential nominee Joseph R. Biden Jr.’s recently announced a plan to fight climate change would be by far the most ambitious of any president in history.

As they rolled out the revised standards last month, current EPA officials described the Obama-era rulemaking as “both improper and redundant.”